VIDEO: Bunji, Machel take the stage together at Soaka 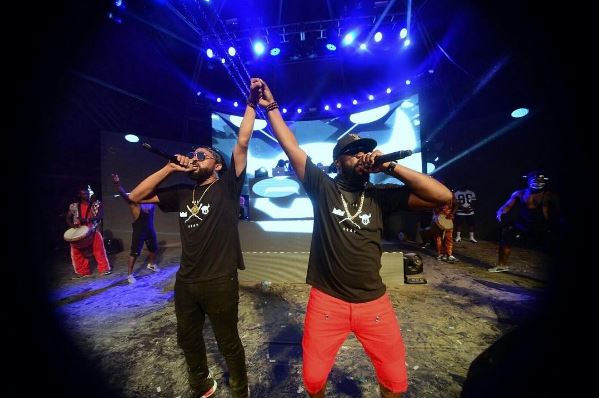 History was made as two giants in the soca industry stood together to perform over the weekend.

Carnival-goers had a fantastic time watching as Bunji Garlin and Machel Montano put an end to their differences and performed at Soaka, which was held in Chaguaramas over the weekend.

Garlin shared the video to his social media accounts to the delight of fans.

Also present was Tony "Chinese Laundry" Chow Lin On, owner of the Trinidad and Tobago Radio Network, and a friend of both artists.

“In all my years I've never seen @tonychowlinon Aka Chinese Laundry waving flag AT ANY TIME. This is a moment,” said Garlin.

On Friday the duo launched their first official collaboration on a song together called 'Buss Head', an homage to the stickfighting tradition, and featuring a heavy j'ouvert-esque rhythm.

Montano explained the background for the song as an ode to Kalinda, an Afro-Trinidadian martial tradition which infuses combat ritual with the sound of drum and the call of the Chantuelle.

"It is the crucible of the Trinidadian warrior tradition and serves as preparation for young warriors."

"The music known as the lavway is the cornerstone of calypso and its lyrics resonate on a deep and spiritual level."

"This tradition is thousands of years old and has evolved into a rural cultural art form, which in the 1880s, was the tool that Joe Talmana and his stick fighters, used to defeat Captain Baker and his army as they attempted to squash carnival and inevitably the Trinidadian and Tobagonian spirit, culture and freedom."

"Buss Head is a modern incarnation of this ancient tradition, manifested by two Kings of Soca, the Monk, Machel Montano and the Viking, Bunji Garlin."

Montano said he hopes this song will represent unity and strength for T&T.

"Now is the time for unity and cooperation to celebrate Caribbean culture. Let us take pride in our rich history and be the example for generations to follow! With boundless faith in our destiny...We are Warriors"

The two previously both had songs on the same 'riddim', as well as working together on a song for an advertising campaign, but have never before collaborated on an original composition together.