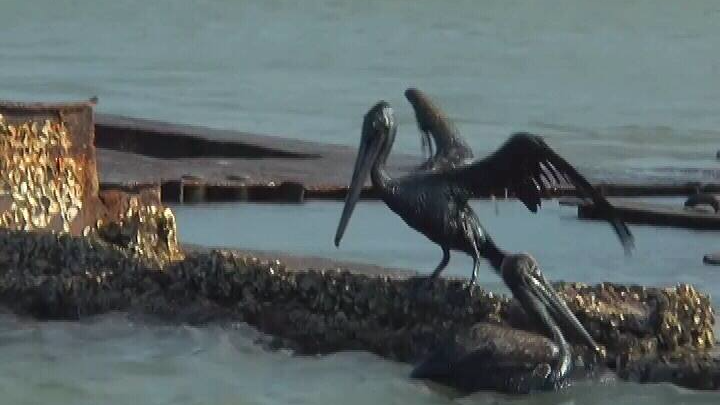 Environmental groups said they have been receiving reports of damage to wildlife and the environment after 20,000 gallons of oil leaked from Petrotrin’s Pointe-a-Pierre refinery earlier this week.

Conservation group Papa Bois Conservation shared a video showing oil bubbling and leaking out of a storage bunker on Tuesday.

“Oil spill, Petrotrin Point-a-Pierre Trinidad. Bunker oil leaked from here in to the sea. Reports are coming in of oil slicked birds. Please send in any photos or videos to Papa Bois Conservation so we can show T&T what is going on,” the group said.

Meanwhile, the El Socorro Wildlife Conservation group shared a photo of a bird covered in oil, asking citizens to contact them if they spot any other injured animals.

“By now most have seen the pictures of the latest oil spill and know of its devastating effects on our wildlife. We are asking citizens to contact us should you encounter any oiled wildlife.”

“These animals, mainly birds, have a limited time before they die of complications from the oil on their bodies or might have been ingested. Please share and take action. Make it your good for this month.”

The group is asking the public to share any sighting of damaged birds or other wildlife by calling 673 5757 or via Whatsapp on 366-4369 with the location and pictures of the animals.

The video conflicts with a recent report by Petrotrin which said that the leak had been ‘largely contained’ within the refinery area.

The company said Tuesday that it was continuing its cleanup and recovery efforts continue the accidental spill at its Pointe-a-Pierre refinery, which led to an accidental leak of 20,000 barrels of bunker fuel on Sunday.

The company added that while aerial surveys and monitoring have indicated that some oil leaked from the Pointe-a-Pierre operations and made its way out to sea, it is continuing ongoing activities to contain and recover the oil and minimise impact to the environment.

The company added that it continues to work closely with the regulatory agencies, the Environmental Management Authority (EMA) and the Ministry of Energy and Energy Industries (MEEI), to ensure the exercise is completed in the shortest time-frame and in accordance with approved standards.