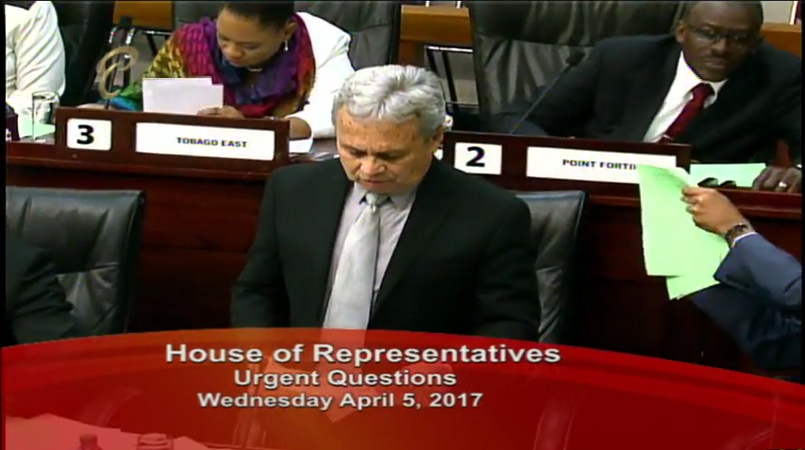 Speaking during Parliament's second discussion on the Tax Information Exchange Agreements Bill 2016, Imbert said he sought and obtained a further extension to the new February 2017 deadline to September 30, 2017.

"That's two chances we've been given by the United States, I do not think we'll get another one," he said.

?Opposition continued to stay away following their demand for a Joint Select Committee to discuss certain clauses in the Bill, after Opposition Leader Kamla Persad-Bissessar led a walk-out on Friday, the second to occur during discussions on the Bill.

Opposition remained in a separate room, watching the Chamber via social media.

He slammed Opposition's absence, adding that if there was a matter Opposition wanted to debate it should have been discussed at the session.

"All of the seats opposite are empty. This would now be the fourth or fifth time that the Government has come prepared to debate amendments proposed by the Opposition and pass the FATCA Bill."

"They had no intention of supporting this legislation. Rather than be here, dealing with the people's business, they are upstairs, somewhere, watching this entire presentation."

"As a citizen of Trinidad and Tobago, I really don't understand what they are up to."

"However, this matter is too important to allow it to be undermined."

Discussion continued on the Bill and clauses 5, 6, 7 and 8 were removed as per concerns raised by Opposition.

For the Bill in its entirety see here: http://bit.ly/2hmeE5p

Opposition walks out of Parliament again

Kamla kicked out of Parliament for unruly conduct; Opposition walks out