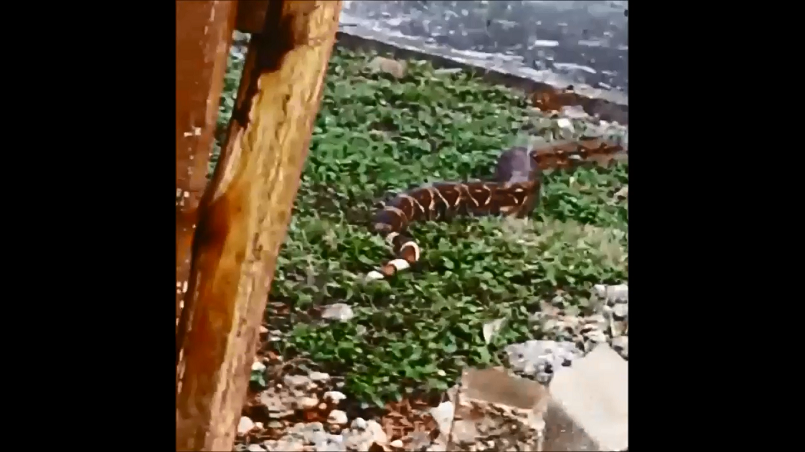 Heavy rains in Trinidad and Tobago caused many people to stay indoors, however for one snake, it was time to take a walk outside and enjoy the cool weather.

Video taken by Kiran Kevin Sankar on Thursday showed the slinky serpent as it carefully made its way across Palmiste Park during heavy rains.

Some persons thought the snake may have been a macajuel or boa constrictor.

According to the University of the West Indies (UWI) Online Guide to The Online Guide to the Animals of Trinidad and Tobago  boa constrictors are very colourful, vivid looking snakes, due to their unique patterns and markings, which allows them to be easily camouflaged into the environment.

Their bodies can be of different colours such as green, red, or yellow and display mysterious patterns of serrated lines, circle, diamonds and ovals.

Boa constrictors originate mainly from South and Central America and some Caribbean islands for example Trinidad, for which it is known as the macajuel.

Boas have small curved teeth, which they used to help in catching prey, but boas bite are non-poisonous, so like their name suggest they use their large bodies to constrict prey, squeezing until it suffocates.

Most boas are solitary animals, unless when mating. They are also nocturnal animals, but will be seen basking in the sun during day if temperatures reached too low at nights.

A Boa constrictor will eat almost anything available, such as rodents, monkeys, birds, wild pig and many more. Younger boas will hunt mice, lizards, small birds, bats and amphibians.

The guide says the snake is not harmful to humans unless disturbed.

The animal is also an important part of the ecosystem and citizens are advised not to harm or seek it out.

Palmiste Park is known for having a thriving wealth of wildlife including caimans, some of which were removed recently after it was feared that the animals might endanger visitors.