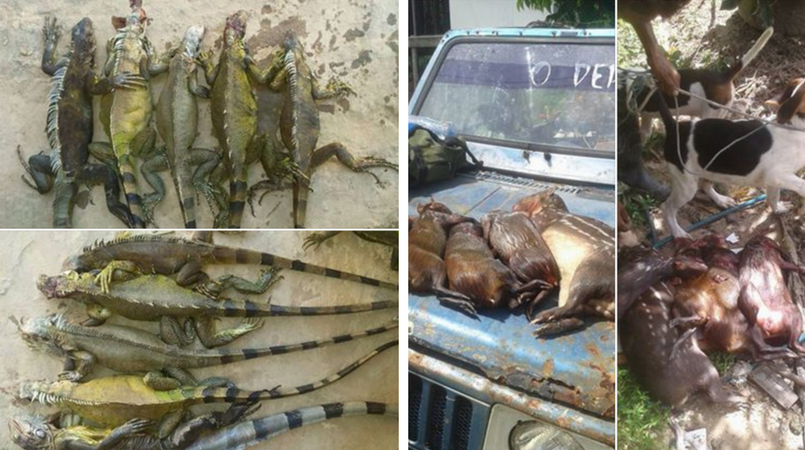 A video of a hunter training his dogs by eating an armadillo alive has caused some hunters to speak out, saying the act is unnecessarily cruel.

In the video, the animal seems to scream out, then is silent, as the hunter uses his foot to keep the animal pinned, while the dogs tear into it.

Persons have condemned the trainer for his methods in training the dogs.

Many have also slammed over-eager hunters for hunting excessively, just three days into the start of the hunting season, which began on October 1.

One man shared a photo of approximately 12-15 iguanas, while others shared photos of agoutis, deer and other animals.

Others have posted photos showing their kills which were taken at night, which is illegal.

One man posted a small iguana for sale with an offer of $400.

One hunter said if this continues, another moratorium on hunting may be issued by Government:

"I was really looking forward to the open season, however, if is one thing this group has taught me is that a more sustainable method must be applied if we are to have any wildlife left for the future. After just two days out of five months, I am saddened by the greed exhibited by some hunters...Not only that, but the small sizes of beasts being killed. As someone rightfully commented earlier, When those in authority sees this overkill....we may face another moratorium..this time for a longer period...smhid !!!" (sic)

"All u hunters that hunting out all d animals like yula (you all) greedy live some for later down d season Na stop posting up so much animals Na they go band it again." (sic)

Others are urging hunters not to post their kills in an effort not to let authorities know how many animals are being killed and sold:

"For bigman some of you all have no brain only on showing off posting pics of 5 6 7 10 12 animals on the page is fame you all looking for and the men them who posting that amount have a lot of small animals in their catch so that looking real good when you all shoot them small animals what will it have remaining for next time?" (sic)

"Not everything you all see say look one boi and kill it no watch the animal before you pull the trigger having said that not saying or telling you all not to post a pic but make from your prized catch meaning out of the hunt it must have a big beast in the set post that one and if you catch a number amount keep that to yourself." (sic)

The South Eastern Hunters Association is cautioning hunters to use moderation in their hunting as the hunting season continues:

"You must hunt wisely, there is no need to have a bumper harvest at the beginning of the season and the rest of the season you harvest the "Dregs" ."

"Hunt sensibly so that your hunt would always be viable.Teach hunters to practice restraint, do not indulge in predator advantage, do not believe in bumper harvest."

"Practice harvesting that is sustainable throughout the open season. Let the animals be truly acclimatize with the dogs so that our harvesting is fair."

"It is your responsibility to provide support to those animals which provide you with a welfare benefit. You must ensure that they remain in viable numbers to sustain hunting."

Some have said that this is futile as many are only concerned about profiting by killing and selling as many animals as possible.

"How is any of this talk/advice possible when many of them will be hunting for gain (to sell it) and not for the enjoyment of the sport! There are those who will be filling up freezers with wild meat with salivating lines queueing up at their gates to get it. Let's also consider those who never stop hunting even though the season is closed and those who encourage them by purchasing the illegally hunted game. Anyone knows what I am talking about or are we all true Trini here?"

Hunting season will continue until the end of February 2017.

It is illegal to hunt protected species such as monkeys, ocelots, anteaters, Scarlet Ibis and pelicans.

Hunting is not permitted in forest reserves, and during open season hunting must be conducted between the hours of 5:30 am and 7:30 pm.

Every member of a hunting party must have a state game hunting licence, the cost of which has since been increased to $100.