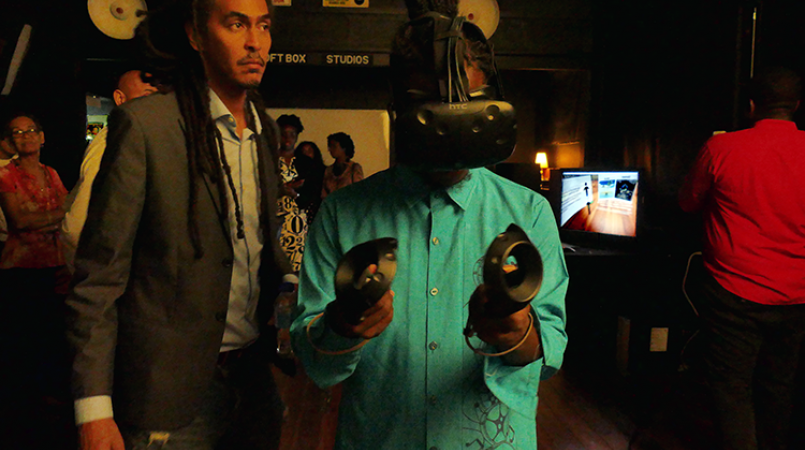 Steelpan was taken to the next level with the launch of Pan Jam, a fully immersive steel pan music platform brought to life by local design agency, Dingole Ltd.

The prototype’s key features were highlighted, including a tenor pan demonstration played against the virtual setting of a Caribbean island.

Attendees were also treated to a tour of the Virtual Steel Pan Museum, which contains a comprehensive timeline of the birth and evolution of steel pan in Trinidad and Tobago.

Through the use of HTC vive, hand controllers become virtual pan sticks that, when struck against virtual steel pans, resonate a range of tones synonymous with the real instrument. Musical notes then appear in 3D space, completely immersing players in a “Carnivalesque” visual sound-dance that represents the melodies, rhythms and chords of a particular musical selection.

It’s anticipated that Pan Jam, once completed, will assume its place among successful game titles like Guitar Hero, Rock Band, and Dance Central which transport the gamer into a virtual musical world.

The project was made a reality through a collaboration with the US Embassy.

Shawn De Freitas, Director at Dingole said the virtual experience will allow people all over the world to experience what it is like to play and learn steel pan.

“Around the world, people are fascinated with the unique character of the sound of the steel pan. Yet, very few people have had the opportunity to actually play the instrument and for those that do it is a truly an unforgettable musical experience. Evoking the spirit of rebellion, modernity and innovation that inspired the birth of the steel pan, Pan Jam takes a step forward fusing the majestic instrument with cutting edge virtual reality and gesture recognition technology to make it the first of its kind.”