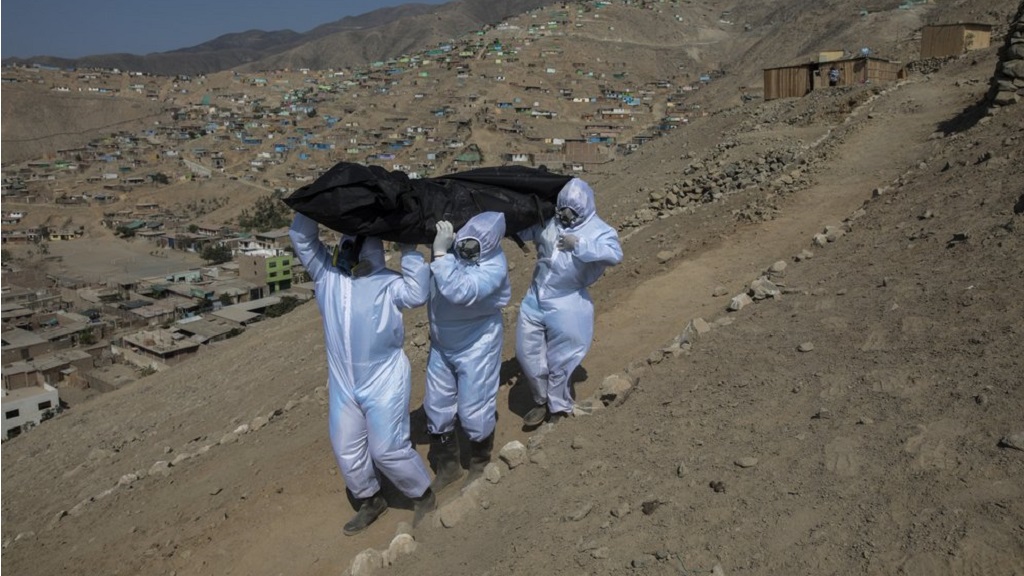 Venezuelans Luis Zerpa, from left, Luis Brito and Jhoan Faneite, carry a body bag that contains the remains of 51-year-old Marcos Espinoza who is suspected to have died of the COVID-19, down a steep hill to a waiting hearse in a working-class neighborhood near Pachacamac, the site of an Inca temple, on the outskirts of Lima, Peru, Friday, May 8, 2020. (AP Photo/Rodrigo Abd)

Faustino López was terrified after his wife, Angélica, was hospitalised with the coronavirus last month.

Deeply shaken by seeing her so seriously ill after 45 years of marriage, and worried about falling sick himself, López moved from their bed to the living room couch, and wept as he watched news of the pandemic spreading through Peru.

Then he lost his sense of taste and began to shiver with fever. A test came back positive for the virus.

Depressed and fearful, López tried to check himself into a government centre for coronavirus patients, according to his two children. A guard turned him away because he hadn't been correctly referred.

The 68-year-old gardener went home, drank muriatic acid and hanged himself in his living room with a yellow extension cord.

López's body remained there, the police afraid to touch it, until a grey Hyundai hearse pulled up. Jhoan Faneite and his stepson, Luis Zerpa, stepped out, wrapped in protective gear and toting a body bag and disinfectant.

Despite strict measures to control the coronavirus, this South American nation of 32 million people has become one of the countries worst hit by the COVID-19 disease.

With more than 104,000 cases and 3,000 deaths, Peru was 12th in the world in numbers of confirmed diagnoses Wednesday, more than reported by China and just behind India.

The true scope of the disaster is even worse.

With more than half of cases going uncounted, according to some doctors' estimates, Peruvian officials call the coronavirus pandemic the most devastating to hit the country since 1492, when Europeans began bringing diseases like smallpox and measles to the Americas. 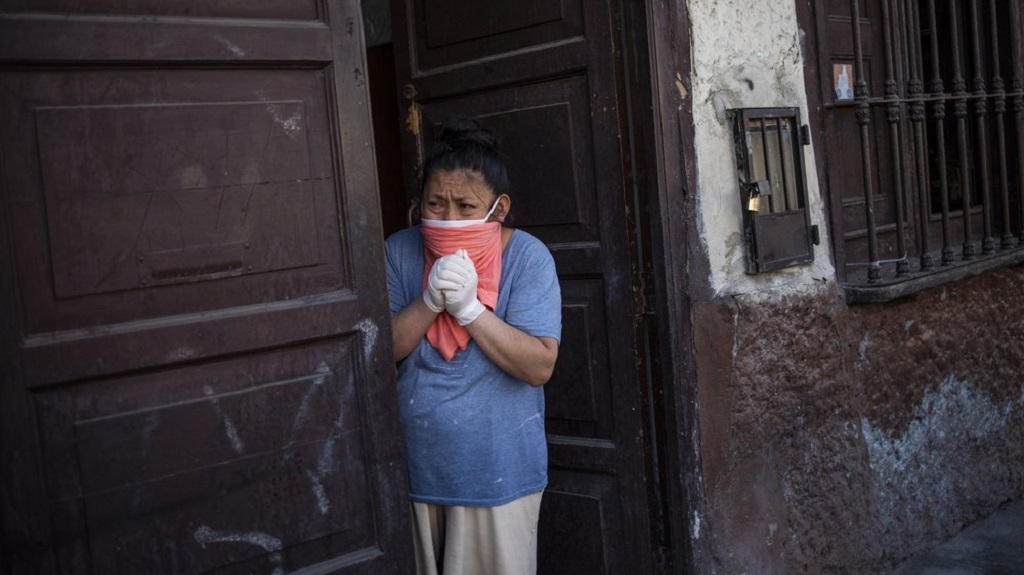 (Photo: Palmira Cortez mournfully watches as a team of Piedrangel funeral workers carry away the body of her 71-year husband, who is suspected to have died from the new coronavirus, in Lima, Peru, Saturday, May 9, 2020. Peruvian officials call the virus the most devastating pandemic to hit the country since 1492, when Europeans began bringing diseases like smallpox and measles to the Americas. (AP Photo/Rodrigo Abd)

Peruvians are dying at home by the hundreds. In the capital, Lima, the gruelling, dangerous work of recovering bodies from homes falls to Faneite, Zerpa and fellow workers from the Piedrangel funeral home, who, clad in full-body orange suits, face masks and goggles to protect themselves, collect as many as 10 bodies a day.

On this afternoon earlier this month, Zerpa began by stripping López and washing down his body with disinfectant as Faneite looked over the 68-year-old's identity card and other official documents.

A week later, López's wife, Angélica, died of coronavirus in a hospital.

"Every day I entrust myself to God so that I don't catch the disease," said Faneite, who worked as an electrician in his native Venezuela before migrating to Peru in 2018 with his wife and stepson amid his home country's years-long economic crisis.

Peru was home to some 865,000 Venezuelan migrants last month, although a significant number have begun returning home due to lack of work during Peru's pandemic shutdown, which led to a 16.25 percent drop in GDP in March, the month it began.

Six days a week, Faneite, Zerpa and some of the roughly 20 other Venezuelan funeral workers drive hearses through wealthy neighbourhoods overlooking the Pacific Ocean as well as through poor areas on hillsides that don't have running water. 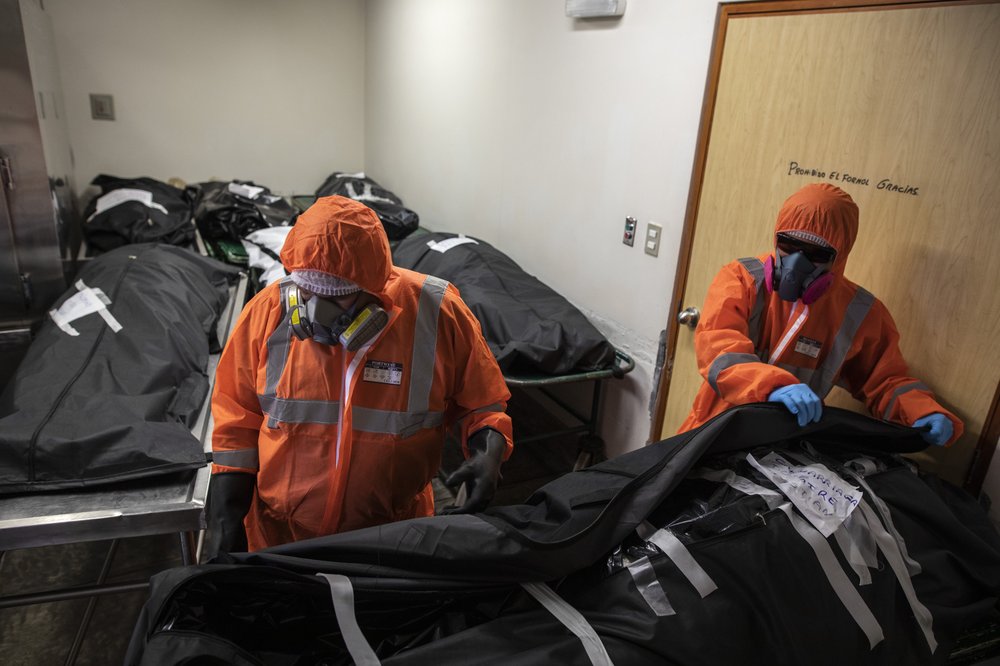 (Photo: Piedrangel funeral home workers, Luis Zerpa of Venezuela and Peruvian Angelo Aza, prepare to remove bodies of deceased persons who are suspected to have died from the new coronavirus, from a public hospital morgue in Lima, Peru, Tuesday, May 5, 2020. The men are part of the Piedrangel funeral team who have been commissioned by the government to remove and cremate the bodies of deceased persons with suspected or confirmed COVID-19. (AP Photo/Rodrigo Abd)

Marcos Epinoza, a 51-year-old electrician, lived in a working-class neighbourhood near Pachacámac, the site of an Inca temple.

Suffering from diabetes, he began drinking an infusion of eucalyptus, ginger and lemon when he felt pain in his eyes earlier this month.

He died in his sleep a week later, just before 3 am on May 8.

Eight hours later, Faneite, Zerpa and another Venezuelan crew member, Luis Brito, walked uphill to his house, only their eyes visible through their protective gear. They hauled him in a body bag by hand, pausing to rest the corpse in the dirt on the steep descent back to the hearse.

The Piedrangel funeral home says it collected the first person confirmed to have died of COVID-19 in Peru, a psychologist who died alone in March in his apartment overlooking the ocean.

When other funeral homes refused to pick up the body, Edgard Gonzales, who owns the funeral home with his three brothers, saw opportunity.

"A door could open here," he remembers telling them. Piedrangel cremates all COVID-19 victims.

Ricardo Noriega, a 77-year-old clothing salesman, felt ill in late April and couldn't find a taxi or a relative to take him to a hospital. He died in an armchair in his living room about a week later, facing a wall hung with family photos. 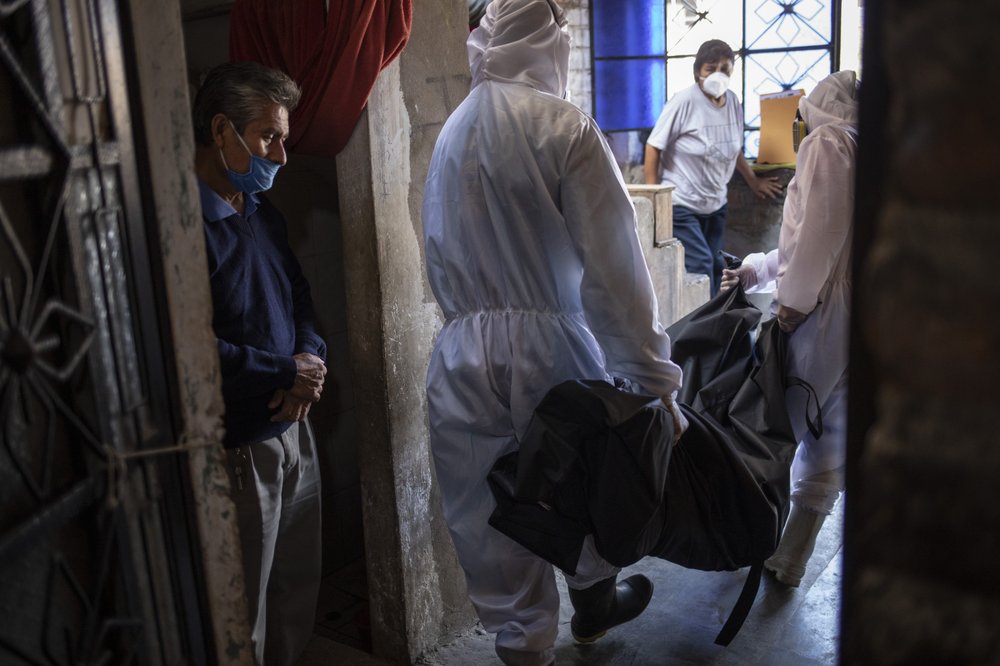 (Photo: Family members stand to the side as Piedrangel funeral home workers remove the body of a person suspected to have died from the new coronavirus, in Lima, Peru, Thursday, May 14, 2020. According to medical and funeral workers, Peruvians are dying from the virus at home by the hundreds. (AP Photo/Rodrigo Abd)

Zerpa and two other colleagues wrapped Noriega in a body bag and carried him out to the hearse.

Peru's government barred all nonessential movement and shuttered business on March 15, a lockdown currently scheduled to last until Sunday.

When soldiers and police stop the Piedrangel hearse to demand its travel permit, many recoil when informed it is carrying a likely COVID-19 victim.

More than 5,000 police officers have been diagnosed with the disease, with 92 deaths, out of a force of roughly 100,000. The army has suffered lower levels of the disease.

Faneite says he has personally handled more than 400 COVID-19 deaths since March.

When he returns home to his sleeping wife and two young children, Faneite undresses in silence, showers and washes his clothes with sodium hypochlorite disinfectant. Sometimes, he gargles with salt water.

He says he must stay healthy for his family, including his elderly parents who remain in Venezuela.

''You have to take care of yourself," he says. "Before they go, before the inevitable happens, I want to see them again."

Desperate hunt for food by Peru's poor amid virus quarantine