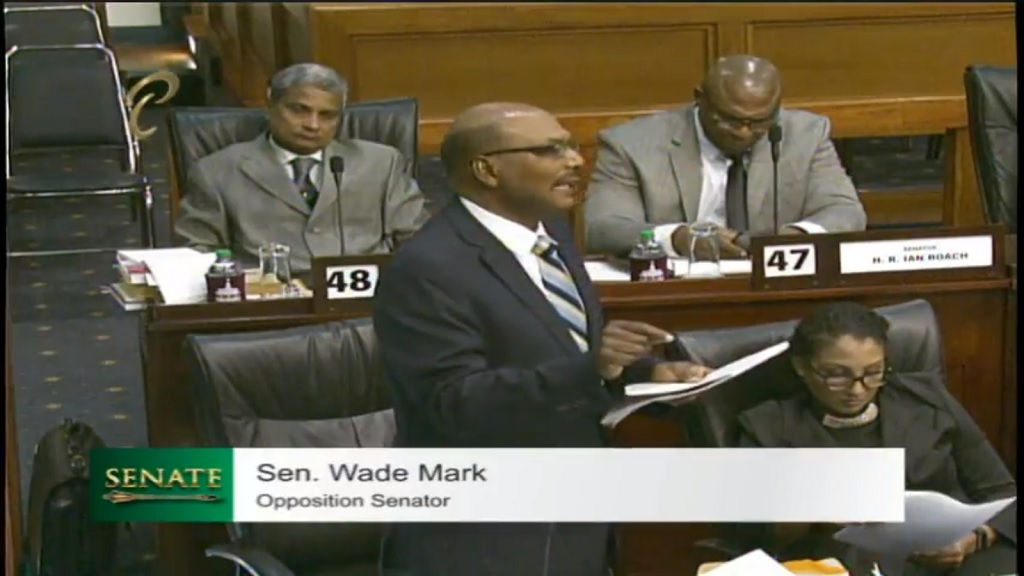 The sitting of the House of Representatives was suspended for several minutes on Tuesday after Senator Wade Mark accused Government of trying to ‘undermine the rights and freedoms’ of citizens.

Mark brought a private member's motion to annul the Freedom of Information (Exemption) Order, 2017, accusing government of trying to creating a secret service similar to that under Nazi Germany.

Mark said the Freedom of Information (Exemption) Order, 2017, which exempts the Strategic Services Agency (SSA) from providing information to the public, will create a ‘PNM secret service’, which will prevent citizens, interest groups and media from accessing information on the SSA.

Senate Vice-President Nigel De Freitas then rose under Standing Order 46 (4), which states “It shall be out of order to use offensive and insulting language about Members of either Chamber, or the political parties to which they are affiliated.”

Mark could then be heard speaking to another member, thought to be Attorney General Faris Al-Rawi, asking “You are Gestapo?”

De Freitas then requested that Mark apologise to the member and retract his statement.

“Be extremely careful with your contribution in this House. Please be reminded of where you are,” De Freitas said.

Mark, however, continued with his speech.

“There are dark intentions on the part of this government to undermine the rights and freedoms of the people of the Republic of Trinidad and Tobago,” he said.

De Freitas then rose again under Standing Order 46 (6), which states ): “No Senator shall make an imputation of improper motives against any Member, an offensive reference to a Member’s private affairs, a personal reflection against a Member or allegations of bribery or corruption.”

“I’m not shouting at anybody, I’m sorry if I shouted at the President. It is my opinion that the Order is nefarious,” Mark said, turning to speak to other members who intervened.

De Freitas was then forced to suspend the sitting for 15 minutes.

Mark said the Order will “directly affect the transparency, openness, accountability and the necessary checks and balances on all aspects of the operations of the SSA, to avoid any potential misuse of office, and/or abuse of power”.

View the first part of the entire sitting here: http://bit.ly/2EKRqy4