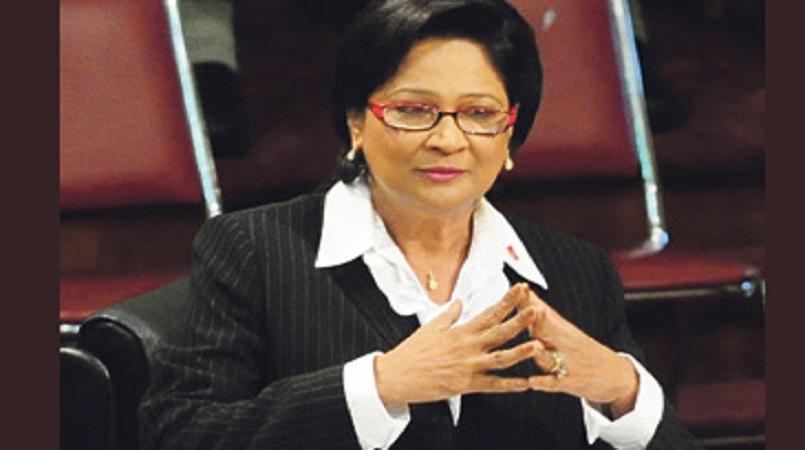 The war of words between the Opposition Leader and the Minister of Finance over the FATCA Bill continues.

In a statement issued on Monday, the Leader of the Opposition said her party has no objection to the agreement signed between Trinidad and Tobago and the United States.

Kamla Persad-Bissessar underscored the fact that the agreement, on the one hand, and the Bill presented to the House, on the other hand, are two separate and distinct matters:

“In late August 2016, the Rowley Administration formally signed the FATCA agreement, sometimes called the IGA, which was previously approved and initialed by my government in November 2014.  The evidence for this can be found on the website of the US Treasury Department which lists Trinidad and Tobago as having signed off on the agreement on November 30, 2014.  As a result, there is absolutely no disagreement between the Government and the Opposition with respect to the IGA.  It is disingenuous for the Minister of Finance, therefore, to continue to speak of the IGA, when the issues raised by the Opposition have focused on the measures proposed by the Rowley Administration in the implementing legislation.”

She reiterated her concerns with the Bill:

“Our concerns are with respect to the draconian provisions in the Bill which are in no way necessary to give effect to the agreement.  Indeed, none of these draconian measures are to be found in legislation in other Caricom countries who have passed domestic legislation to give effect to FATCA agreements with the US. We are further concerned that the Bill disproportionately violates constitutional guarantees and

"The Bill seeks to eliminate the privacy provisions found in a number of additional existing laws which have not yet been identified and gives the Minister of Finance the sole authority to appoint persons other than Board of Inland Revenue to access individuals’ private financial information and interface the IRS and with local and international financial institutions. It is entirely unacceptable for a politician to be given such wide-ranging, intrusive power to access individuals’ personal financial information.”

The Leader of the Opposition stated that appropriate safeguards must be included to protect citizens’ privacy rights:

“There is no recourse in the Bill for an affected individual to properly address the abuse of power or the sharing of sensitive information even if it goes beyond the domain of agreed limits. There is a penalty for violation of limits, yes, but what is the process for triggering this, and how will the individual know?

The sharing of sensitive information across borders is done automatically and can be done without notification or knowledge of the person being scrutinized, it is important to have safeguards to prevent abuse by politicians.”

Even worse, Mrs. Persad-Bissessar explained that the Minister is given undue powers to make changes without proper Parliamentary oversight:

“Moreover, no regulations have been provided to govern the operationalisation of the Bill. The Minister, in the Bill presented, can make changes to the agreement by order without coming to Parliament. Thus, there is no Parliamentary oversight of future legislative and other action to be taken by the Minister of Finance and others. Further it is difficult to tell from the existing Bill how US accounts of TT nationals are affected, how TT nationals with US residency are covered and what are the options for dual citizens carrying TT and US citizenship.”

The Leader of the Opposition looks forward to consideration of the Bill by a Joint Select Committee and key stakeholders.

She disagreed with Imbert that there is not enough time for the JSC to meet, stating that the Committee can be fully established by Wednesday, it can meet on Thursday and Friday and both houses can meet on any two of Monday 19, Tuesday 20 or Wednesday 21, way in advance of the September 30 deadline.

"It is the Opposition’s view that the Government cannot bring such a complex Bill which requires the examination of complicated issues so late in the day and then try in an authoritarian fashion to browbeat the Opposition into submission. The government cannot be wrong and strong.  It must tell the truth and be reasonable," she said.

The Opposition is meeting with Government today on the matter.