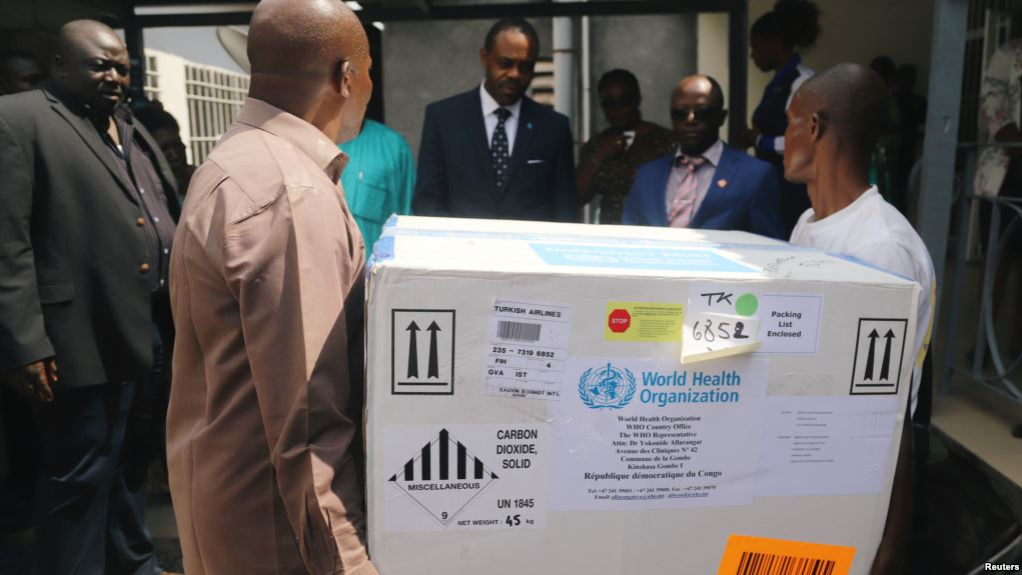 While the first 4,000 doses of Ebola vaccines landed in Kinshasa on Wednesday, the World Health Organization (WHO) in Geneva was receiving an additional batch of 2,000 doses from Merck that are due to be shipped to the Democratic Republic of the Congo (DRC) in the coming days.

The vaccines will help battle an outbreak of Ebola virus disease that was declared in early May in northwestern DRC.

The Ministry of Health – with support from WHO, Gavi, Médecins Sans Frontières and other health partners – is preparing to conduct ring vaccination Ring vaccination: a protocol in which contacts, and the contacts of contacts, are vaccinated shortly after a case is detected. of high-risk populations in affected health zones as soon as possible.

“The cold chain that is required to maintain this vaccine and store it until the point of delivery requires us to maintain -60 to -80 degrees. It is true, we have the technology today to maintain that in the field, but it still remains a challenge,” says Dr Ana Maria Henao-Restrepo, Co-technical lead of the WHO R&D Blueprint.

Although most of the 44 suspected, probable and confirmed cases reported to date are in Bikoro and Iboko health zones, one new case was confirmed by the Ministry of Health on 16 May in Mbandaka city, which has a population of nearly 1.2 million people.

Dr Peter Salama, WHO Deputy Director-General, Emergency Preparedness and Response, said controlling the virus once it has reached a large urban area is particularly challenging.

He said, “The biggest challenge is that now we know that we have suspected cases in an urban centre in Democratic Republic of Congo. In the past in most of the Ebola outbreaks in DRC, it’s been rural and fairly self-limited, but now we know that populations of more than a million are at risk. Another major issue here is that Mbandaka is on the banks of Congo River, and that river connects to the internal hinterland of DRC but also to surrounding countries such as Congo-Brazzaville and Central African Republic, so this outbreak now has a real risk of national and regional amplification."

Within a week of the outbreak being declared, WHO released US$2 million from the Contingency Fund for Emergencies to fund operations and WHO Director-General Tedros Adhanom Ghebreyesus led a high-level delegation to Kinshasa and Bikoro. WHO estimates that the response operation will cost over US$25 million and is appealing for international support.

Dr. Salama said, “We estimate now that that would cost around US$25 million, the first three months of the operation. But it is a cost that is worth investing now because we know from Ebola West Africa experience that that cost the international community between US$3-4 billion. So much better to invest now. That is of course besides the fact that, most importantly, we lost 11,000 people in the Ebola outbreak in West Africa. And we really have an opportunity here with the game-changing technology of vaccines to actually prevent large-scale suffering and deaths.”