Watch: 80 percent of population in need of aid 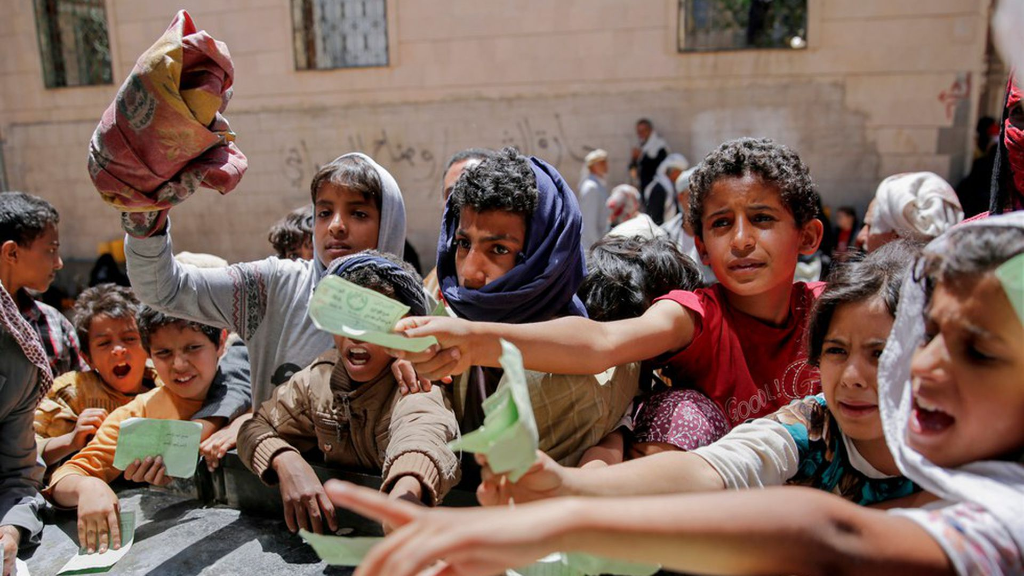 Filling water jugs in a place where supplies are dangerously short.

These people in a camp for the newly displaced in Abs, northwest Yemen, are amongst millions struggling to survive amidst an ongoing humanitarian crisis

According to the Norwegian Refugee Council (NRC), 24 million people in the country are now in need of humanitarian aid, roughly 80 percent of the total population.

That number is up by two million from last year, according to the council. Aid groups are calling on Yemen's warring parties to help bring the conflict to an end, saying they need more resources to help the country's struggling population.

Most do not have enough to eat and hundreds of thousands have been displaced.

Mokhtar Mohammed Habal has been displaced for nearly four years, and during that time has moved multiple times.

"We don't have a lot of things at the camp, enough shelter, water, food. There's a lot we don't have. Education also, most of the children aren't going to school," he says.

Aid groups say they face difficulties in accessing people who need the aid the most due to fighting and restrictions imposed by the country's armed groups. Those who are able to flee end up in camps which are often isolated from basic resources.

Groups like the NRC say they do their best to provide aid to camp residents but that they need more funding and cooperation from the warring parties to do so.

Abdel Aziz Al-Idrisi, an advocacy coordinator for NRC, says the main hope is to return these people to their homes.

"This is something that the Norwegian Council can't help with. All of this is in the hands of the politicians and decision makers outside this country. They have the power to calm the situation down, reach an agreement and let these people return home safely," he says.

For those Yemenis who aren't able to flee fighting, many live under a daily fear of air or artillery strikes.

Samira Ahmed Hamoud's husband was killed in an airstrike and she and her son were injured. Her house has also been damaged by strikes.

But she and her two sons still live there, trying to eke out a survival.

"Both my children and I are in a very difficult state," she says.

The conflict in Yemen began with the 2014 takeover of the capital, Sanaa, by the Iranian-backed Houthis, who toppled the government of Abed Rabbo Mansour Hadi.

A Saudi-led coalition allied with Hadi's internationally recognised government has been fighting the Houthis since 2015.

The fighting in the Arab world's poorest country has killed thousands of civilians, left millions suffering from food and medical care shortages, and pushed the country to the brink of famine.

The UN is appealing for more than 4 billion US dollars to assist 15 million people across Yemen this year and aid groups have implored donors to pledge generously at a conference starting tomorrow (Tuesday) in Geneva.

Tomorrow's conference has been convened by Secretary-General Antonio Guterres and is co-hosted by Sweden and Switzerland.