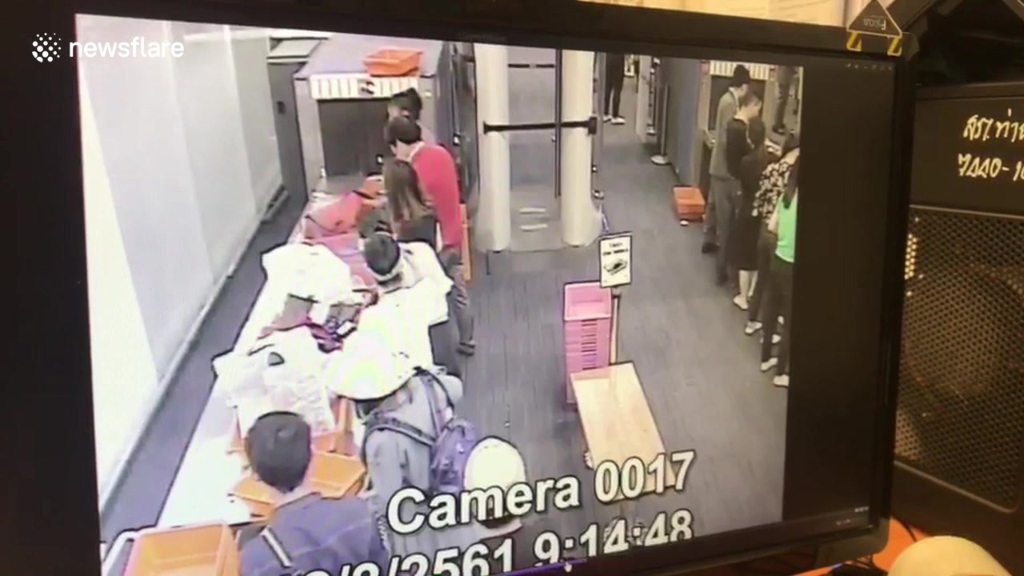 This is the moment an airport security guard steals US$630 worth of cash from a passenger's handbag - seconds before it goes through an x-ray.

Nimble-fingered Busakorn Somkwamdee, 26, was caught on CCTV opening the tourist's bag when it was in a basket on a conveyor belt.

She then removed a large bundle of notes and slipped them into her right pocket - despite a passenger standing next to her at the time.

But the horrified Chinese passenger contacted airport bosses when they noticed the missing money while in the departure lounge at Suvarnabhumi Airport in Thailand.

Cops arrested Somkwamdee who was caught red-handed with 4,000 Chinese yen. The employee, who had worked at the airport for two years, was interviewed by police and suspended after she admitted the theft.

Airport boss Kittipong Kittikajorn said the security guard admitted the theft but claimed it was the first time she had stolen.

Kittipong, deputy director of the airport, said: ''Airport officials are reviewing CCTV to check if the staff member has stolen from other passengers. We believe that there could be other thefts because she carried out this one very professionally. She was quick with her hands and knew how to avoid CCTV cameras. All the evidence will be gathered and she will be prosecuted.''

London City Airport shuts down due to unexploded WWII bomb