Watch: Barge with 600 gallons of diesel sinks near Galapagos 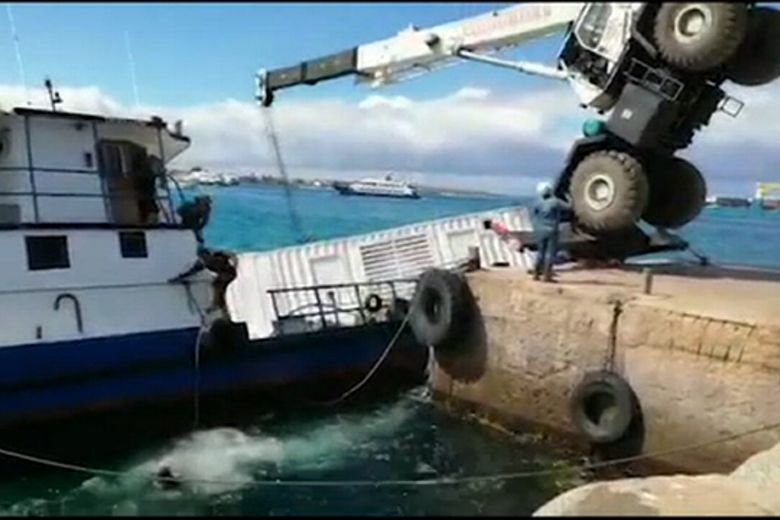 Emergency clean-ups are underway after a barge carrying 600 gallons of diesel sank in the San Cristobal Island, the easternmost island in the Galapagos archipelago on Sunday.

The incident occurred as workers attempted to load a container on a barge with the crane and both somehow tipped, destabilizing the vessel which turned on its side.

Workers in the barge began to jump into the water to avoid sinking with the ship.

The provincial Emergency Operation Committee (COE) said they have taken control of the situation and work to mitigate the possible impacts to surrounding areas.

Staff from the Galapagos National Park and the Ecuadorian Navy used containment barriers, as well as hydrocarbon-absorbing cloth around the vessel to prevent the scattering of any diesel that could leak out from the barge.

Authorities said they have inspected the banks to assess the conditions of the area and measure the possible direct impacts on the ecosystem.

San Cristobal is home to playful sea lions, giant tortoises and finches, and idyllic beaches. Like most of the islands in the archipelago, travellers there must abide by strict rules in order to protect the flora and fauna.

Conservationists have increasingly voiced concern that the Galapagos and its delicate ecosystem are under threat from over-tourism.

SOS Galapagos, an advocacy group, posted photos of the spill while denouncing what they claimed was an "illegal and dangerous" operation. The coast guard announced it has activated an emergency plan to contain the oil spill.