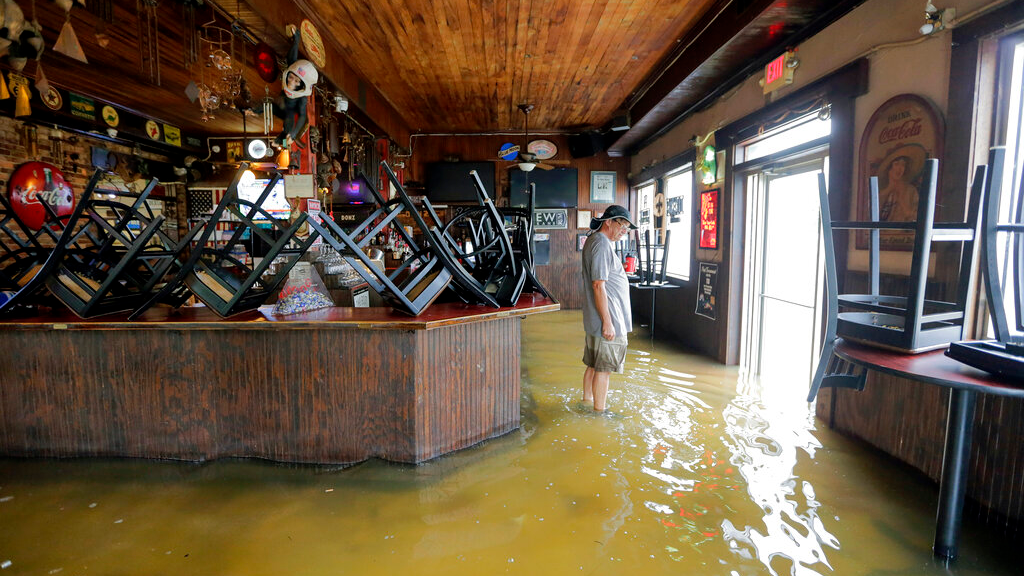 A man stands in floodwaters at Don'z On the Lake as Tropical Storm Barry's winds push water over the Lake Pontchartrain seawall Saturday, July 13, 2019. (David Grunfeld/The Advocate via AP)

Though the system's winds were steadily weakening since it made landfall Saturday in Louisiana, its rain bands created a flooding and tornado threat stretching from central Louisiana to eastern Mississippi and beyond. Several parishes or counties in both states were under flash flood warnings.

Far from the storm's center, tornado warnings were issued Sunday morning in both states, though no serious damage or injuries were reported.

President Donald Trump asked people across the region to keep their guard up, saying on Twitter Sunday: "A big risk of major flooding in large parts of Louisiana and all across the Gulf Coast. Please be very careful!"

Forecasters warned of a continued threat of heavy rains into Monday as the center of the storm trudged inland. The U.S. National Hurricane Center said Sunday parts of south-central Louisiana could still have rainfall totals of up to 12 inches (30 centimeters), with isolated pockets of 15 inches (38 centimeters).

"This rainfall is expected to lead to dangerous, life-threatening flooding," forecasters wrote in an advisory Sunday.

In Mississippi, forecasters said eight inches (20 centimeters) of rain had fallen in parts of Jasper and Jones counties, with several more inches possible. With torrential rain pounding the state's Interstate 59 corridor, only the headlights of oncoming cars were visible on the highway, and water flowed like a creek in the median.

Barry was expected to weaken to a tropical depression Sunday as its center moves from northern Louisiana into Arkansas. The system, which had briefly become a Category 1 hurricane, was clinging Sunday to tropical storm status with maximum sustained winds falling to 40 mph (65 kph).

New Orleans Mayor LaToya Cantrell said Sunday the city was "beyond lucky" that rainfall there fell well short of early predictions of a deluge that could overwhelm the city's pumping systems.

"We were spared," she said at a news conference, while noting the city was ready to help nearby parishes hit harder.

In a sign that the city was returning to normal, flights were resuming Sunday at its airport. Restaurants reopened, and people were retrieving their cars from medians and other high ground.

Carrie Cuchens, who lost power at her home southeast of Lafayette, said crews were out working to remove trees that fell on power lines. Forecasters say the area, where several parishes were under a flash flood warning, could see 2 inches (5 centimeters) of additional rain on Sunday. Though some yards had pooling water, Cuchens didn't think her or her neighbors' homes would flood.

"There's certainly water, certainly a lot of water, and as it continues to rain there's always that concern," she said.

Another worry is that large trees could topple because of the saturated ground.

"If this rain sits on top of us, the ground of course now is already saturated," she said. "The roots are so saturated that if any wind, or any kind of shift happens, they're easier to come up out of the ground. It's not snapping limbs - it's the whole entire tree. We have 100-year-old trees back here."

To the southeast in Morgan City, Lois and Steve Bergeron spent Sunday cleaning up their lawn, which was littered with debris from trees. They were grateful the damage wasn't worse.

"At least it didn't hit our house," she said.

And in Mandeville, north of New Orleans along Lake Pontchartrain, Michael Forbes was also picking up limbs and other debris at his home as a drizzle fell. Water got under his house, which is on stilts, but there was no damage and the power never went off.

"I'll take this any day over something like Katrina," he said Sunday. "This will clear out, we'll clean up and we'll go on."