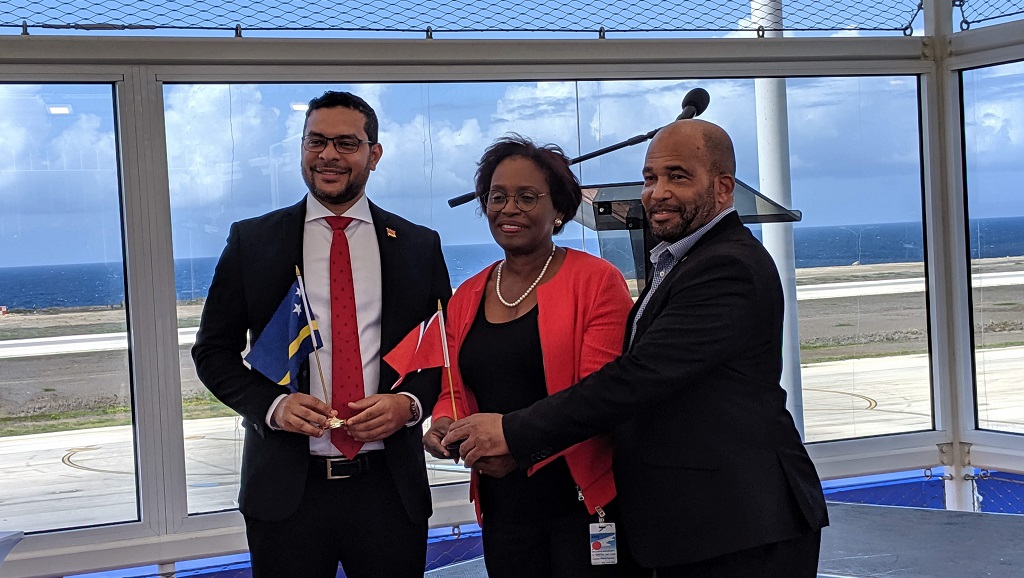 Curaçaoans welcomed the arrival of the first Caribbean Airlines flight from Trinidad on Friday, heralding the new route as an opportunity for tourism and trade.

Speaking upon arrival at the Curaçao International Airport, Tourism Minister Randall Mitchell said the new route is a sign of the Caribbean region's strengthening ties.

"Today's inaugural flight marks not only the strengthening of ties but also the beginning of direct service by Caribbean Airlines between Trinidad and Tobago and Curaçao.

"The process of building connections across the region is moving steadily ahead. Last year Caribbean Airlines added Cuba and St Vincent and the Grenadines to our network. Today Curaçao becomes the airline's 21st destination," he said.

Mitchell said CAL also intends to extend flights to the Cayman Islands with flights between Jamaica and Grand Cayman in the future.

"Trinidad and Tobago is proud of the long-standing relationship between our two countries, one that is built on mutual respect and friendship, cooperation and exchange, tourism and trade," he said.

"With this new service we expect to further develop the business and leisure market between Trinidad and Tobago and Curaçao," he said.

Mitchell said to LoopTT that Curaçao receives a high number of visitors from the Netherlands and it is hoped that this route opens a connection point from which Dutch travellers can experience Trinidad and Tobago's cultural festivals.

The new route travels twice weekly with flights on Mondays and Fridays, non-stop.

Caribbean Airlines CEO, Garvin Medera, said this addition of 300 seats into both markets means additional economic activity between both countries.

"Through the Caribbean identity we continue to showcase the best of our Caribbean region. Today we are here to celebrate the start of this new route which adds another island into our expanding network. Based on the tremendous response and the number of seats sold on this route so far, it is clear that there is great potential and opportunity for tourism and business in Curaçao," he said.

Curaçao, based in the Caribbean Sea, is a country within the Kingdom of the Netherlands situated some 37 miles (60 km) north of the coast of Venezuela.

Although physiographically part of the South American continental shelf, Curaçao and neighbouring islands off the northern coast of South America are usually considered to constitute the southwestern arc of the Lesser Antilles. The capital is Willemstad.

Curaçao was settled by Arawak people from the South American mainland. It was first visited by Europeans in 1499 and was settled by the Spanish and, later, by the Dutch, who established it as a major centre of trade for the Dutch West India Company.

The Spanish deported the entire indigenous population as slaves to Hispaniola in 1515.

Curaçao is the home of the oldest continuously inhabited Jewish community in the Western Hemisphere, originally formed by Sephardic Jews who emigrated from Portugal in the 1500s.

The island provided one special advantage for the Dutch—one of the finest natural harbours in the West Indies. At the southeastern end of the island, a channel, Sint Anna Bay, passes through reefs to a large, deep, virtually enclosed bay called Schottegat, the site of the capital town, Willemstad.

The need for salt to preserve herring initially drove the Dutch to the Caribbean. During the period 1660 to 1700, the Dutch West India Company flourished; the slave trade boomed, and the port of Curaçao was opened to all countries both to receive the incoming food supplies and to dispose of products from the plantations of South America.

The island was subjected to frequent invasions from competing privateers and suffered during the wars between the English and Dutch. It has remained continuously in Dutch hands since 1816.

Curaçao is independent in internal affairs, but the government of the Netherlands is responsible for defence, foreign relations, and similar matters.