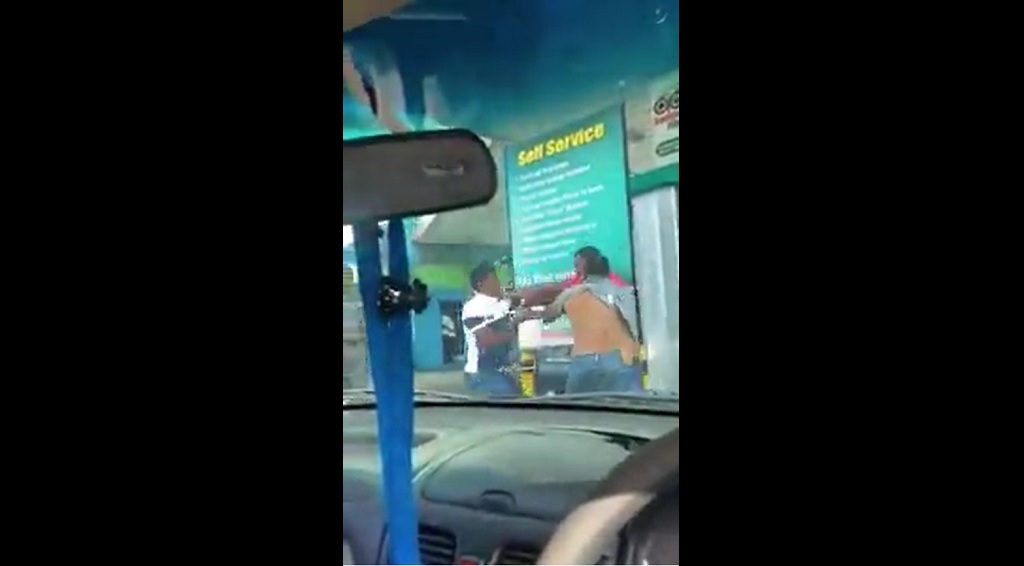 Photo taken from a video shared via Facebook shows a brawl which took place at a Unipet gas station on December 16, 2018.

The stress of the impending Christmas holiday seems to have affected several persons who were seen engaging in a full-scale brawl at a Unipet station in Princes Town over the weekend.

The video, which went viral online and on social media on Sunday, shows two men engaging in blows near to the gas pumps, while a woman attempts to intervene.

One security guard struggles valiantly to break up the fight and tries to dissuade another man who was seen picking up an object which he seemingly wanted to throw at one of the attackers. The fourth man returns with an object and is seen attacking one of the men with it.

Unipet urged citizens to exert more control and condemned the acts of violence.

The incident is now being investigated by the police.

"Unipet strongly condemns all acts of violence particularly when they risk the lives of innocent persons.  A fracas occurred at our Princess Town Station on Sunday 16th December and is now being investigated by the Princes Town Police Station."

"The company regrets that this incident occurred on our premises and takes the opportunity to remind customers of the need to respect each other and exercise patience at all times."

"While we are all experiencing the stress and tension of modern day living, it is necessary for us all to dial back and remember to be “our brother’s keeper”.

Unipet said it continues to review and improve its security measures with the aim of maintaining the highest level of security for customers and employees at all stations.

The Trinidad and Tobago Police Service said in a statement issued Monday that no one was arrested up to Monday, but everyone who was involved in the fight is assisting with the investigation.

All those involved in the fight received medical treatment after the incident, and Cpl. Mohammed, of the Princes Town Police Station, is leading enquiries into the incident.

Father in court after fight at gas station