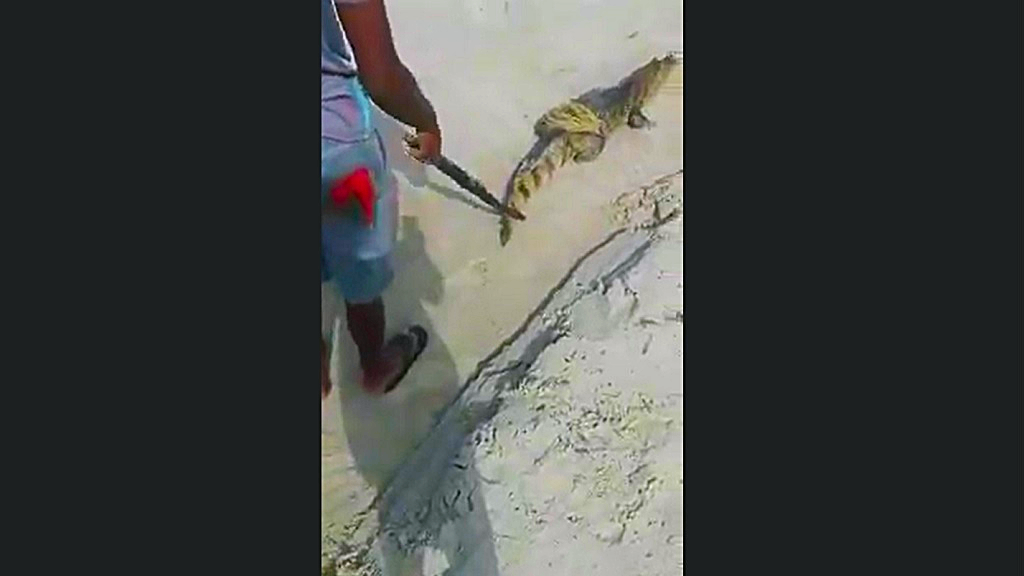 Photo: A caiman which wandered onto Maracas Beach from a nearby river due to recent heavy rains caused a stir over the weekend.

Beachgoers were berated after a caiman who appeared bewildered and frightened was tied up and poked after wandering onto Maracas Beach over the weekend.

Video footage shared to social media on Sunday evening showed the caiman wandering near the mouth of the Maracas Bay River as some men attempted to tie its mouth and remove it from the rocks where it had wedged itself.

One beachgoer however spoke out after men were seen pulling it by its tail and prodding it with a stick.

Facebook user Kathyann Sankar, who posted the video, said the animal was allowed to return to the river safely.

One woman said that several onlookers intended to catch and kill the caiman for eating.

"Since I was there when this happened..First of all because of the heavy rainfall the river came down and that's why the it was on the beach. Second of all these people were very disgusting.. they only caught it to kill it.. they weren't "rescuing it" like people commenting. The guy (who everyone is making fun of) actually open his mouth and save this animal and I commend him for that along with some others who spoke up. Another guy tried to help it back into the water for safety. Idk what eventually happened but I hope it's safe. Why Trinidadians always want to kill and eat everything that have four legs. The thing wasn't doing anything until people started terrorizing it!!!"

"Set of illiterates terrorizing the poor caiman like they never seen one before... if you not going to eat it why mock and provoke it for sh**s and giggles?"

"I don't understand why these people think that it is okay to taunt the animal. It was afraid. I would have released it back up river but remove the rope first. This isn't funny."

"I agree it is cruel. The life-guard is on site he could have called someone from the wildlife Association. Trinidad will always remain a 3rd world country. In America the authority would have been on site to rectify the situation. I wonder how they would feel if someone did that to them. All they had to do is even call the nearest Police Station for assistance."

Others advocated for slaughtering and cooking it:

"Bake and caiman...... Sorry, I meant bake and shark. Taste the same anyways."

"Some stiff curry and pepper cook down dry with coconut milk and lashing some white oak."

Anyone who spots a wild animal and seeks to remove can contact Wildlife and Environmental Protection of Trinidad and Tobago (WEPTT) at  341-9983 or the Serpentarium at 766-8951.

Under the Conservation of Wildlife Act it is illegal to hunt, kill, eat or sell Caimans unless granted a license to do so while hunting season is open.

Hunting season runs from October 1 to the end of February every year.

Watch: Caiman goes for a dip in swimming pool