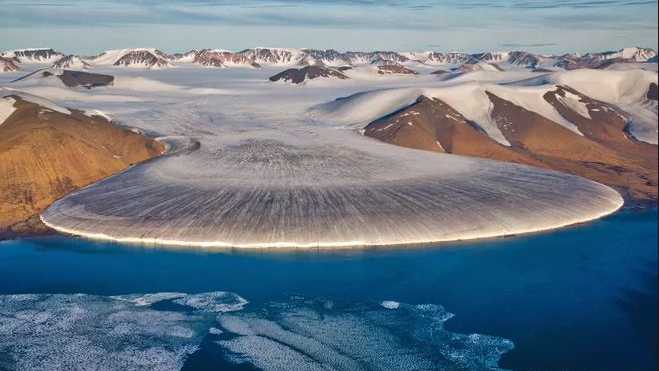 An Ice Climatologist has described 2019 as an exceptional melt year for the Greenland ice sheet.

"This year we've had a melt onset that started between three and five weeks ahead of the previous decade average," said Jason Box, Ice Climatologist at the Geological Survey of Denmark and Greenland

The heatwave that smashed high-temperature records in five European countries a week ago is now over Greenland, accelerating the melting of the island's ice sheet and causing massive ice loss in the Arctic.

Greenland, the world's largest island, is a semi-autonomous Danish territory between the Atlantic and Arctic oceans that has 82% of its surface covered in ice.

Pictures filmed by documentary maker Caspar Haarløv showed water from melted ice gushing in torrents through the landscape on the west coast of Greenland.

The pictures were filmed for "Into the Ice", a documentary currently in production.

The area of the Greenland ice sheet that is showing indications of melt has been growing daily, and hit a record 56.5% for this year on Wednesday, said a climate scientist with the Danish Meteorological Institute (DMI).

The DMI scientist said that is expected to expand and peak on Thursday before cooler temperatures slow the pace of the melt.

The scope of Wednesday's ice melt is a number difficult to grasp.

To understand just how much ice is being lost, a mere 1 billion tons - or 1 gigaton - of ice loss is equivalent to about 400,000 Olympic-sized swimming pools, the DMI said.

The DMI said since June 1 - roughly the start of the ice-loss season - the Greenland ice sheet has lost 240 gigatons (240 billion metric tons) this year.

That compares with 290 gigatons lost overall in the 2012 melt season, which usually goes through the end of August.

A June 2019 study by scientists in the U.S. and Denmark said melting ice in Greenland alone will add between 5 and 33 centimetres (2 to 13 inches) to rising global sea levels by the year 2100.

If all the ice in Greenland melted - which would take centuries - the world's oceans would rise by 7.2 meters (23 feet, 7 inches), the study found.

The current melting has been brought on by the arrival of the same warm air from North Africa and Spain that melted European cities and towns last week, setting national temperature records in Belgium, Germany, Luxembourg, the Netherlands and Britain.

Antarctica's broken off iceberg is bigger than Trinidad