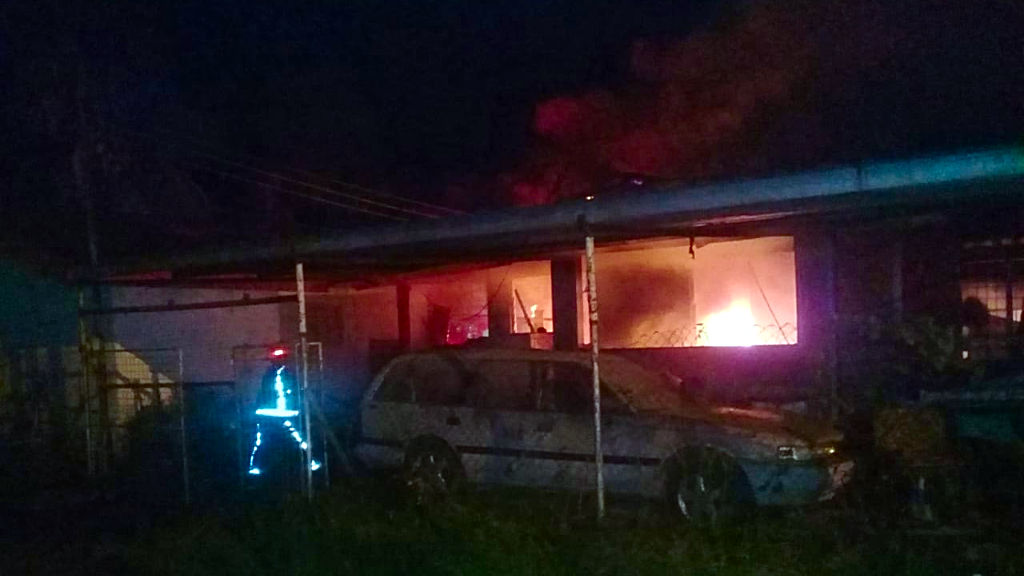 What should have been a night of celebration instead turned to despair after a Couva home was destroyed by fire, allegedly due to a scratch bomb being thrown into the compound.

According to reports, the incident occurred in Baksh Settlement Extension #1, Mc Bean, Couva, on Tuesday night around 6:00 pm.

The blaze reportedly began after a scratch bomb was tossed into the compound of the house, igniting furniture which was stored there.

The identity of the person who threw the scratch bomb is not yet known.

Citizens spoke out against the use of fireworks, calling them a hazard.

Ranee Lee Laggan: "So unfortunate that this happened only tonight while driving around I had to stop and tell these young boys to stop with scratch bomb because they throw one and it almost land in my vehicle. Scratch bombs need to be illegal in this country."

Scm Mohammed: "These young men do these things intentionally... when you speak to them their behaviour is worst than anything you know... their parents don't take complaints and now many ppl is with out a home... I hope that they all including the parents learn a lesson... keep your animals under control... keep them in your space to do their horrific acts and not distress the neighborhood."

Hema Harrymungal-Bedasie: "The laws are supposed to be enforced. The noise from these things are detrimental to animals, babies, the elderly, heart patients etc. In the past people and animals have been injured and now a home is destroyed."

Khalil G Khan: "Scratch bomb don't stray, you throw them. Call it arson or sabotage using fireworks cause that is what it was . Ban all fireworks!"

Anand Baal: "Anyone can tell me why the law regarding the use of fireworks is not enforced. The most absurd thing is that it’s legal to sell hence creating in the mind of consumers that its legal to use without certain requirements."

According to Section 99 (1) of the Summary Offences Act, any person who "throws, casts, sets fire to, or lets off any fireworks within any town is liable to a fine of one thousand dollars ($1000)."

The Act's description of 'town' includes Port of Spain, San Fernando, Arima, and "every part of the area within two miles of the boundaries of such City or of either of such Boroughs, and also any place or area declared by the Minister, by Order, to be a town or to be deemed to be included within a town for the purposes of the said sections".

Section 100 of the Act also stated that anyone who throws or sets fire to fireworks on a street which is not in any town or into any place within 60 feet of a street, is liable to a fine of $400.

In order to set fireworks within these areas, permission must be sought at least 48 hours prior from the Police Commissioner or Superintendent with that authority.