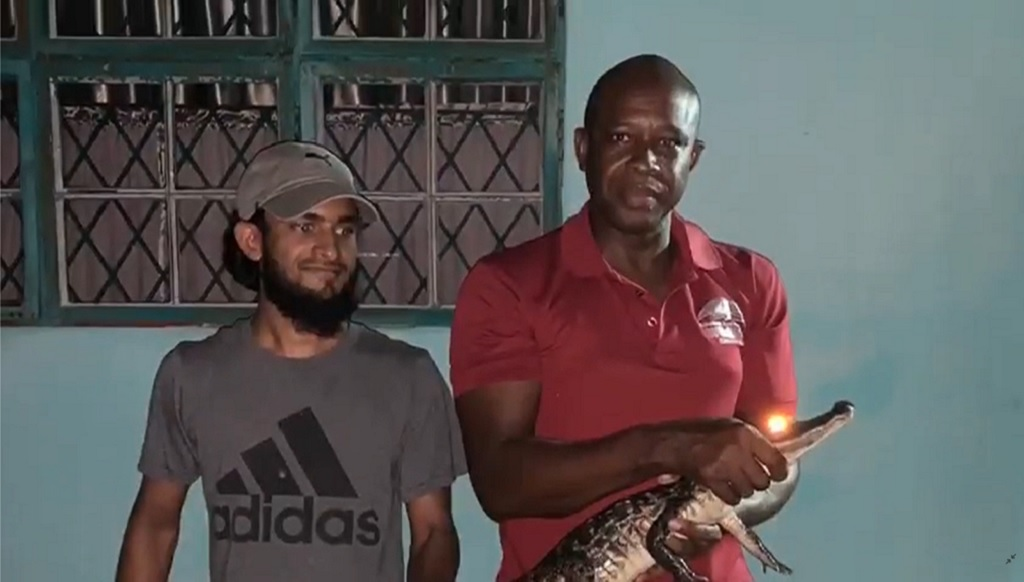 A slippery caiman tried to elude capture after he was spotted in a drain in Central Trinidad.

Meade said the caiman was seen along Munroe Road in Central Trinidad, hiding under a driveway bridge.

“Even the small ones can be slippery! Enjoy this video of our adventure last night capturing a caiman below someone's driveway bridge. It was released less than 10 minutes later to a more suitable location. Thank you Shameel and the home owner and the resourceful neighbour. If you encounter wildlife that needs assistance or relocation please call 3664369. Your ECWC, Sustaining bio-diversity, Preserving the Future,” he said in a social media post.

The spectacled caiman, which is native to Trinidad and Tobago is often confused with the American alligator (Alligator mississippiensis) and American crocodile (Crocodylus acutus).

Spectacled caimans like muddy freshwater environments such as swamps, lakes, roadside ditches, rivers, and marshes, however they are also able to endure brackish and saline environments.

They can grow to between two and 2.5 meters long while in rare instances some can grow to an astonishing 3.5 metres.

Young caimans are yellow in colour and black crossbars are seen on their bodies. On the backs of some animals, dark patches are noticed along with the presence of dark coloured rings on some of their tails.

Their bodies are heavily armoured and covered with scales. Their ridged tails are powerful and perfectly adapted to help with swimming.

The hind legs of the spectacled caiman are larger (five digits) than their front (four partly webbed digits) and their extremely powerful jaws are packed with teeth which are not seen while its mouth is closed, another factor that distinguishes it from the American crocodiles.

Caimans are also able to alter their colour in colder weather, a result of the expanding of the black pigment cells found in their skin.

Anyone who finds wildlife on their properties is urged to call the Emperor Valley Zoo, or the Wildlife and Environmental Protection of Trinidad and Tobago (WEPTT) on 341-9983, or the El Soccoro Centre for Wildlife Conservation on 366-4369.

Watch: Caiman goes for a dip in swimming pool