Watch: Dead Philippines whale had 40kg of plastic in its stomach 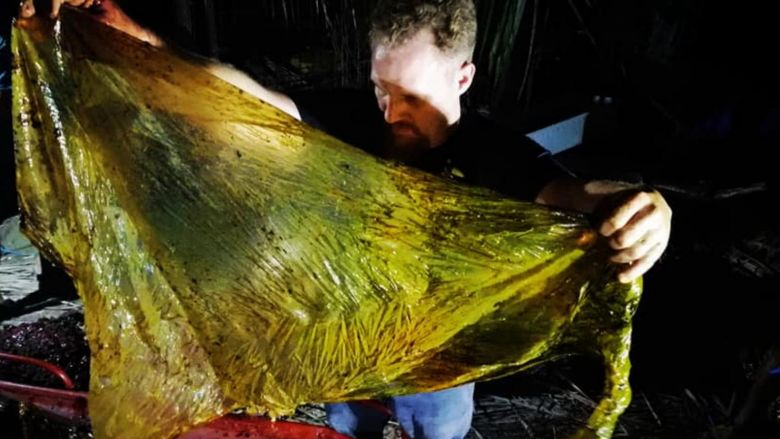 Harrowing footage recently surfaced showing 40kg of plastic pollution being pulled from a whale's stomach after it was found dead.

The Cuvier's beaked whale was seen by locals - still barely alive - floating in the shallows after it washed ashore in Compostela Valley, the Philippines on March 16 just after 5AM.

Environmental officials were called and arrived at 11AM but the whale had died moments earlier. Workers were horrified when they found hundreds of plastic items in the whale's stomach.

Recovered from inside the beaked whale were 16 rice sacks, four plastic bags used in banana plantations, multiple shopping bags, and hundreds of other small pieces of plastic packaging. All of them had been floating in the ocean before being swallowed by the marine creature.

Staff from the country's Bureau of Fisheries and Aquatic Resources Fishery Management Regulatory Division performed a necropsy on the whale to find out the cause of death led by Dr. Elaine Belvis and American marine biologist Darrel Blatchley.

Darrel said: ''Finding the whale like this was tragic. It's so sad to see the effect humans are having on sea life. This whale had the most plastic we have ever seen in a whale. It's disgusting. Action must be taken by the government against those who continue to treat the waterways and ocean as dumpsters.''

Darrel said workers would continue sifting through the whale's guts to identify the plastic which had clogged its stomach. He added: ''Doing this is not just for our gain but mainly to give education and for people to realise how magnificent these animals are.''

UN: Environment is deadly, worsening mess, but not hopeless

Whale dies in Thailand after swallowing 8kg of plastic