Watch: Ebola is spreading in DRC--this is a doctor's story 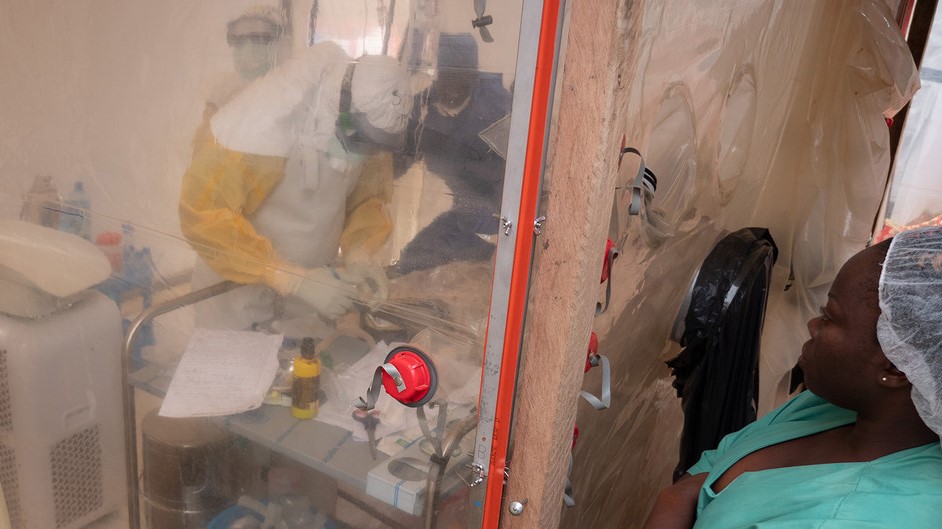 Television pictures like these are a stark reminder of the impact of the Ebola virus in West Africa, although it's hardly history.

The virus began in Guinea in 2014 and within months it had spread to bordering Liberia and Sierra Leone.

"During that time I was eating, sleeping, waking, breathing Ebola. It influenced everything. You don't touch other people. That's not just at work. That's all the time. So, even just normal human interactions change. And it does have a psychological impact."

When the epidemic was declared over in 2016, Ebola had killed over eleven thousand people and infected thousands more.

Black became embroiled in the outbreak by chance. Sierra Leone had the highest maternal mortality rate in the world and he was in the country with MSF to improve services for women and their babies.

He says: "At the beginning the outbreak I absolutely was terrified and I think that's true of many of my colleagues. It was a huge unknown. The situation was growing around us. It felt that it was exponential and there were very limited responses coming into the country. There was also at that time we didn't know a huge amount about Ebola. We didn't know a huge amount about a massive Ebola outbreak because had never been anything like that before. It was unprecedented."

It not only crossed international borders within Africa, but air travel meant a few cases also turned up overseas creating alarm among societies who'd believed they were safe.

It was during this period that Black says he learned that treatment can't take place without the buy-in of the local population.

It's tempting to believe that when someone has a disease and you can offer them treatment, they will take it and get better.

According to Black the communities most affected tend to be furthest from the state and may not have trust in the government, or the aid agencies.

"People had experienced seeing family members, or community members going to these rehabilitation centres and never coming back. And this had had the opposite effect of what had been wasted because it simply made people frightened."

In September 2014 the Government imposed a nationwide lockdown for three days.

People crowded food stores to pick up supplies before the moment when all movement on the streets was banned and police guarded roadblocks.

Black says: "There were alternative narratives within the community as to what was going on whether that be that this was a result of witchcraft or curses, or whether this was a conspiracy brought by Westerners. So this was an added complexity, an added challenge to the response and it highlighted the importance of engaging with the community early on and listening to them and understanding what their fears were."

The result of these types of fears and distrust are now being experienced by medical aid workers in the Democratic Republic of Congo.

Decades of conflict involving militias within the country has led to millions being displaced, life expectancy here is low and according to the IMF it's one of the poorest nations on Earth.

According to UNICEF children account for a third of the total number of people sick with Ebola in DRC.

"As there were more survivors who were returning to their homes and able to say look this is what happened and this is you know I went into the Ebola treatment centre and actually you know, yes they are wearing these very frightening yellow suits, but then they did look after me and you know and I've come back and I can tell you that they didn't harvest my organs, or steal my blood, or inject me with the disease as some of these theories that were going around were. Then the reaction of the local population changed," he says.

The Director-General of the World Health Organisation, Dr Tedros Adhanom Ghebreyesus, completed a three-day mission to Congo in March this year.

His visit coincided with the second of two armed attacks on a treatment centre in Butembo.

MSF, whose medical workers were a major source of Ebola treatment in the area, has withdrawn its personnel because of the attacks and lack of security.

At the end of April doctors, nurses and health workers took to the streets, to protest about the public's mistrust of them and their resistance to treatment.

The fear and suspicion is not limited to the public.,

Black remembers: "I was probably paranoid I would say. I was paranoid about the people around me, about the people I worked with, the people that I was caring for. I was also paranoid to myself and what would happen if I got infected. How would my family react? Would I stay in West Africa? Would I be evacuated? Would I get treatment? You know you're in a very hot climate and every time I felt quite warm I would question whether or not I was beginning to get a fever. Had I slipped up somehow, had I not washed my hands at an appropriate time. And a lot of that actually is quite illogical if you apply the basic sciences of Ebola, as a virus."

Black was able to have complete trust in his co-workers, but the Ebola crisis couldn't help but exact a psychological toll.

Health workers, both local and international couldn't help being affected by seeing the dying on such a large scale.

This is why there is support for medical workers and families affected by Ebola from psychosocial teams.

This week the WHO's Executive Director Dr. Michael Ryan said: "There hasn't been an Ebola outbreak, in my experience, with a frightened community where we don't see issues of community acceptance and community trust. This is a traumatised community living in a highly volatile zone, who are not trusting of outsiders at the best of times. That is not what has stopped us running health operations. What has interrupted our operations in the main has been large scale violence against the response by armed attackers."

Black himself was never confronted by violence, but he says: "I don't think we're going to see a quick fix because I think we need to take time to understand all of these different complexities and understand what are the needs of the community, as they see it, not as we see it, before they're going to trust and accept what we can offer them."

The disease is spread mainly through contact with the bodily fluids of Ebola patients and victims. In an effort to contain the virus, health workers monitor those who are known to have come into contact with an Ebola patient for a period of 21 days.

If new cases haven't previously been identified as possible contacts by outbreak responders that suggests authorities have little idea where the virus is currently spreading.