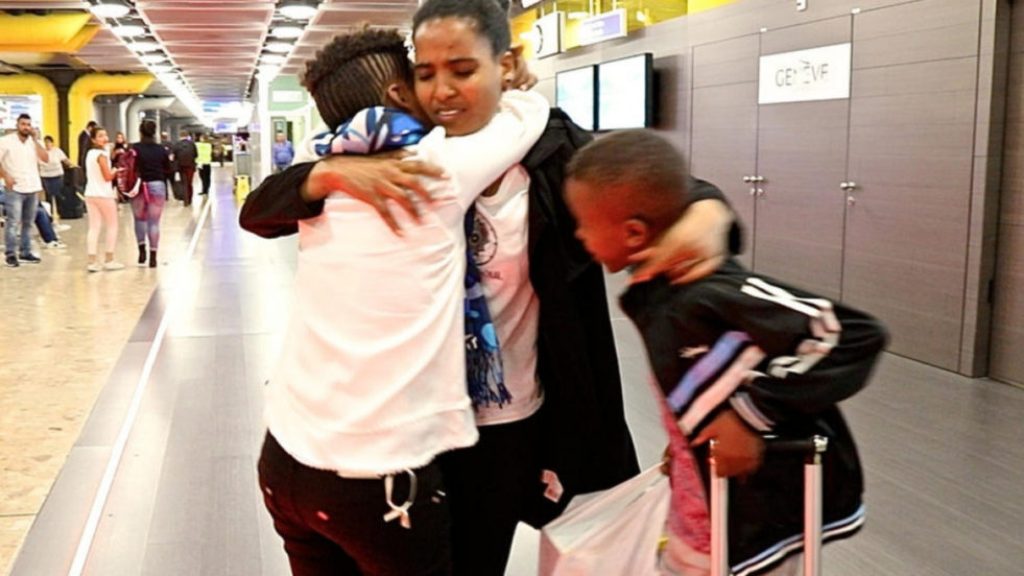 This is the tearjerking moment two Eritrean minors are reunited with their mother after an eight-year odyssey during which they endured kidnapping, detention, and a failed sea cross.

In April last year, Kedija, 15, and Yonas, 12, were finally successful in their desperate attempt to rejoin their mother, Semira, in Geneva, Switzerland, thanks to the intervention of UNHCR and their NGO partners in Libya.

The video that was released on January 24, shows the emotional moment the two children ran across Geneva International Airport to hug their mother who they hadn't seen in nearly a decade.

"Despite being separated for more than eight years, I never lost hope of being reunited with my kids again,” said Semira as tears of joy ran down her face.

The two children, who have fake names, were left in the grandparents' care in 2010, when Semira was forced to flee persecution in Eritrea.

In 2015, after five years of relative stability, as Kedija and Yonas were themselves forced to flee insecurity in Eritrea and cross the border into Ethiopia, they lost any contact with their mother for several months.

But thanks to Semira's refusal to give up, the urgent intervention of governments and humanitarian agencies – and a large slice of luck – the mother was finally able to locate her children.

Unbeknownst to her, the siblings had been on a harrowing journey.

They had travelled alone through four countries, often without food and water, survived kidnapping and an Ethiopian refugee camp as well as an ill-fated boat to Europe.

In mid-2017, the children and their uncle set off on their perilous and uncertain journey to reach Semira.

The trio battled fierce temperatures, thirst, and hunger as they begged rides on trucks and buses across Ethiopia and Sudan, striving to reach the southern shores of the Mediterranean Sea.

Events took a dark turn at the Sudanese-Libyan border, where the group were violently abducted by smugglers, who found out the children’s mother was living in Switzerland and demanded a ransom in order to free them.

Then one day the siblings were unexpectedly released and left to wander lost and alone in the vast Libyan wilderness, but miraculously, they were discovered and taken in by a group of fellow Eritreans.

"I’d spent days and nights praying for them, despite everyone around me losing hope" Semira recalled.

After UNHCR tracked the children down in Libya, the Swiss government agreed to grant them humanitarian visas to join their mother.

UNHCR Senior Protection Assistant, Noor Elshin, recalls meeting the children in Misrata’s Karareem detention centre: "This is literally like finding a needle in a haystack.

"Despite having them in front of me, I still couldn’t believe that we’d actually found them."

There are an estimated 3,800 refugees and asylum seekers currently being held in dozens of official detention centres across Libya, and others falling into the hands of armed groups and human traffickers.

The chances of finding Kedija and Yonas were slim, but thanks to the intervention of UNHCR, the children ended their eight-year odyssey on a joyful note.