Watch: Fay Ann hits back at 'body shamers' after her feet go viral 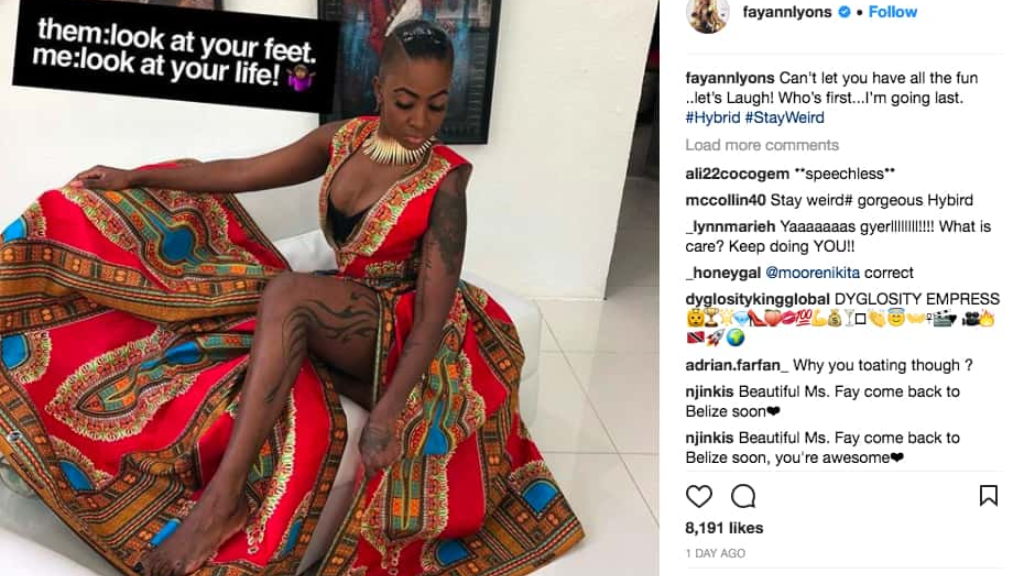 Soca songstress Fay Ann Lyons-Alvarez is hitting back at 'body shamers' after criticisms from the public on the appearance of her feet.

Lyons-Alvarez posted a photo on her social media pages on Friday, dressed in African garb before heading to a showing of Black Panther.

But it wasn't the outfit that caught the public's attention. It was Lyons-Alvarez's bare foot and toes which some said were darker in colour than the rest of her body. Some commenters made fun of the size of Lyons'-Alvarez's exposed foot.

The foot took on a life of its own and became the talk of social media over the last two days.

It has been immortalised in memes and a "Fay Ann foot challenge" has been circulating on social media.

One man said: "Fay Ann Lyons foot wii . She look like she do a pin drop in cement. Clearly she been to Wakanda like she dip she foot in vibranium . Foot long like a Maracas run from point . She foot so hard she could tap dance barefoot."

Another said: "Fay Ann don't need to drive. She could take two steps and arrive at her destination."

Some have described the comments as cyberbullying.

But Lyons-Alvarez hit back, questioning whether persons making fun of her feet have perfect looks themselves.

"Some of you idiots that Body shame ppl and not even PERFECT need to sit!" (sic)

In a video response, she, however, said she was unbothered by the negativity.

"Firstly, I am not bothered by any of the comments. I think some of you all comments are very hilarious and I think it's funny," she said.

"I just don't want us to continue down that black-people-bashing road because then it turns into this whole fiasco that's going to turn out very, very ugly."|

Many have rushed to the defence of the soca star saying the negative comments were uncalled for and there are bigger things to talk about in T&T like the economy and crime.

"The same people that laughing at Fay-Ann foot would cry if someone said the same about them. One set of key board bullies out here yes. Get a life.. not because someone in the spotlight it means you can shame the person."