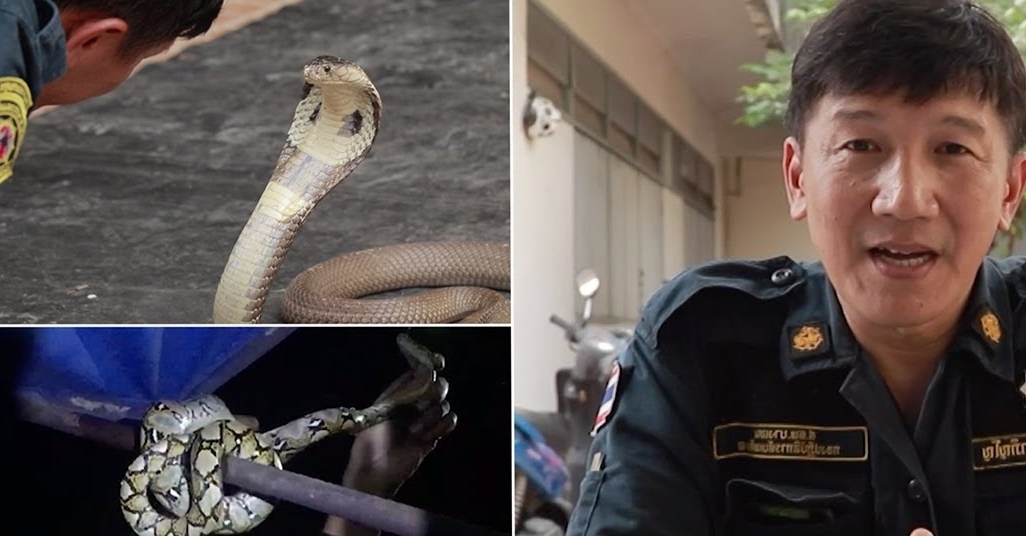 A brave fireman who catches hundreds of snakes a month has spoken about his deadly job and the soaring numbers of serpents in the Thai capital.

Phinyo Pukphinyo, 49, became a fireman when he was 18 and had never handled a snake until the station was tasked with tackling the growing problem in 2003.

The fearless fire chief said that until then, each time a python appeared in Bangkok it was either ignored or released back into the city in the green spaces or canals.

But that led to even more snakes being born - with females laying up to 50 eggs at a time - and the urban ecosystem being turned on its head.

Pythons, which make up more than 75 percent of the city's snake population, became the dominant species devouring frogs, rats, cats, birds and dogs.

There are now believed to be millions of snakes living in the city's sewers, woodland and pipework.

Phinyo said he receives more than 20 calls a day to catch snakes at the height of the rainy season when the reptiles appear in the open in search of food.

He said: ''Bangkok has a lot of snakes. The demand for snake catching is higher in the rainy season. It's the season when snakes go searching for food.

''There are a lot of pythons because we used to think that they couldn't harm humans are they're non-venomous. We thought they would reduce disease by eating rats.

''So officers would catch and release pythons and the other kind of non-venomous snakes such as Indonesian Rat snakes or Copperheaded Rat Snake in the area.''