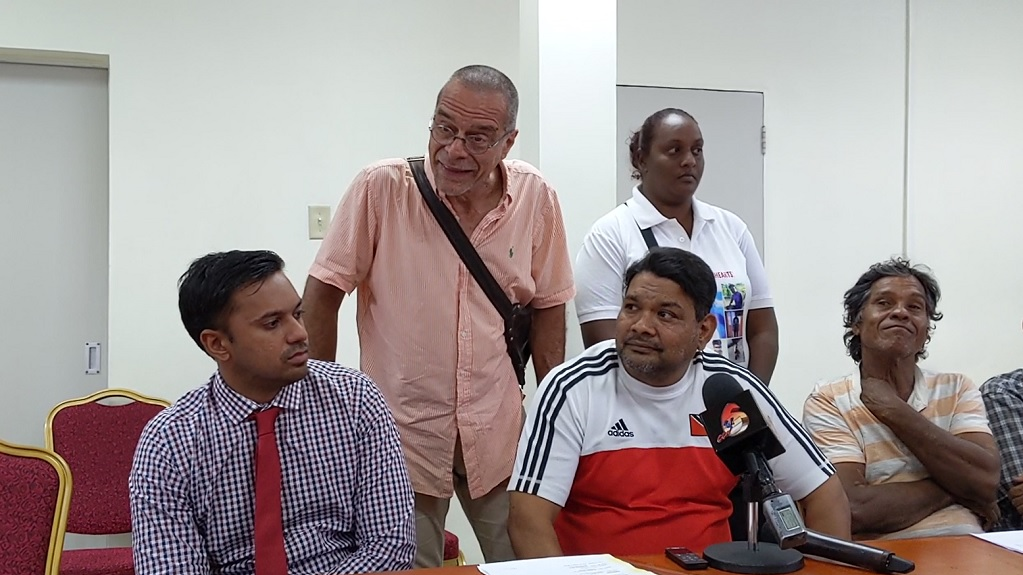 Fishermen from the Carli Bay and Claxton Bay communities have stopped going out to sea after an attack in July which left five men dead and two missing at sea.

President of the Carli Bay Fishing Association, Imtiaz Khan, said they are calling for a meeting with Minister of National Security Stuart Young to establish a Multi-Stakeholder Committee for better safety at sea.

Khan was speaking at a media briefing on Wednesday after five fishermen were killed and two remained missing following an attack at sea on July 22, 2019.

Two women were charged with robbery in connection with the incident.

He said some fishermen cannot afford books for their children to go to school as their livelihoods are stalled due to crime.

He also referred to promises for the refitting of interceptors in November 2018, but apart from two vessels sent to Tobago, these vessels are yet to be operational.

“Are they waiting for more to die? It was the worst (attack) to happen on our seas. Why can’t these measures be put in place for our fisherfolk?”

Khan said that a simple solution would have been to show officials the location of usual fishing spots in order to put patrol systems in place.

“This could have been avoided by just meeting with us,” he said.

Regarding proposals to amend legislation for mandatory GPS on fishing boats, Khan said that GPS would protect property, but would not be enough to protect fishermen's lives.

Hosein said two weeks ago while fishing, a boat approached with several English-speaking men, one of whom was armed, asking him about his boat and engine.

He took out his mobile phone and told the group he was live on Facebook and upon hearing this, they left.

Hosein said however that the situation is affecting not only commercial fishermen but sport fishing and tourism, as Trinidad and Tobago is known as one of the best tarpon fishing areas in the world.

Corporate Secretary of Fishermen and Friends of the Sea, Gary Aboud, said that recent comments made by Young were unsatisfactory.

“Three weeks have passed since the meeting, things are just dragging on. Men are being threatened and people have died. When the Minister of National Security says…we need to go out in groups…no number of groups of fishermen can overpower an Uzi machine gun. No disrespect to him but I don’t think he has caught a fish in his life.”

“When he makes these statements…put a GPS on our boat, so they can find our engine…but what about our men?”

Where are the radars?

“The commanders of the Coast Guard…they admitted to us that they have no radars. We know senior people in the (Trinidad and Tobago) Coast Guard and they have no radars, if there were radars then why can’t we stop the influx of guns? It does not exist and if it does then make a statement and show us how it can help us,” he said.

Aboud added that the FFOS is not politically affiliated and just wants to prevent further loss of life.

The group outlined a number of recommendations, including:

- Implementation of TTCG community interceptors which would decrease response time to emergencies and increase a security presence. The FFOS said the Fisheries Division has indicated its willingness to partner with the TTCG to identify spaces at landing sites.

- More frequent patrols by the TTCG

- An emergency response protocol manual and training for first responders.

The group also called for a hotline fishermen could use in cases of emergencies.

Aboud said the groups are planning to submit a formal letter to the Prime Minister Dr Keith Rowley on Monday asking for their matter to be addressed.

Minister of Agriculture, Lands and Fisheries, Clarence Rambharat, said there is regular contact between fishermen and the Director of Fisheries and the Fisheries Officer, and that if there is any issue requiring his intervention he is willing to step in.

He added that the Fisheries Division is also working on legislation which seeks to address some of these issues.