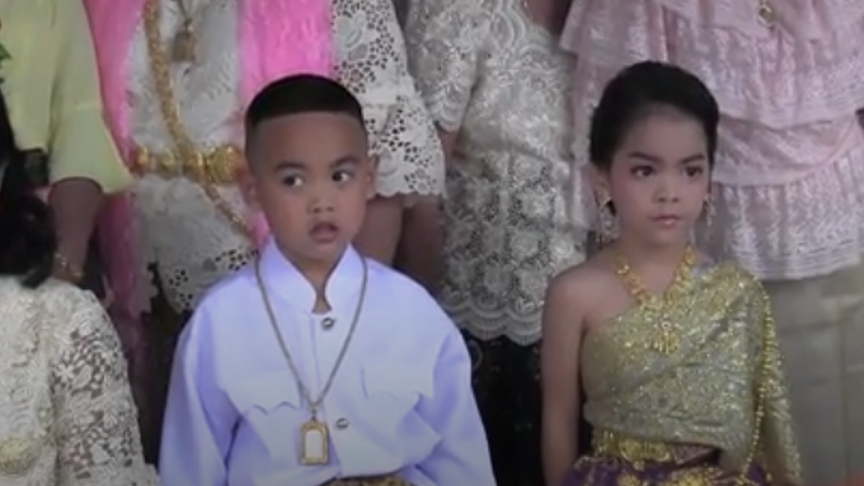 This is the bizarre moment two five-year-old Thai twins were married for good luck and to cleanse themselves of ''sins from past lives''.

The brother and sister - named "mobile phone" and "watermelon" - were born in 2013 but when their parents believed they were mature enough, they arranged a ceremony for them.

Superstitious locals reckon that unless male and female twins are married as quickly as possible, one of them will suffer a terrible death when they are older. The whole village tuned out of the traditional ceremony featuring dancers, dowries, and gifts of gold in Ang Thong province, southern Thailand, on September 5.

District council chief Parinya Khemachit - who performed a role the equivalent to a registrar - said the newlyweds were now sure of a ''healthy and prosperous future''.

He said: ''It is our belief that a wedding ceremony should be held for the male and female twins. This is for the good fortune of the children and so that they have healthy bodies. 'They will grow old, happy with prosperity and won't be hurt or sick. This is an ancient belief from the past.''

The sister's official names are "Chaya Prasop Tamrong" with the informal name of "Tangmo" - meaning watermelon - while the boy's official name is Chanon and he has the nickname "Mobile phone".

A traditional ceremony featured a street procession followed by a game where the groom had to pass through nine 'gates' before he could meet the bride. He then had to pay a dowry of 10,000 baht ($306) in cash and gold worth 38,000 baht ($1160) before marrying her.

Malaysia marriage between girl, 11 and man, 41 under investigation