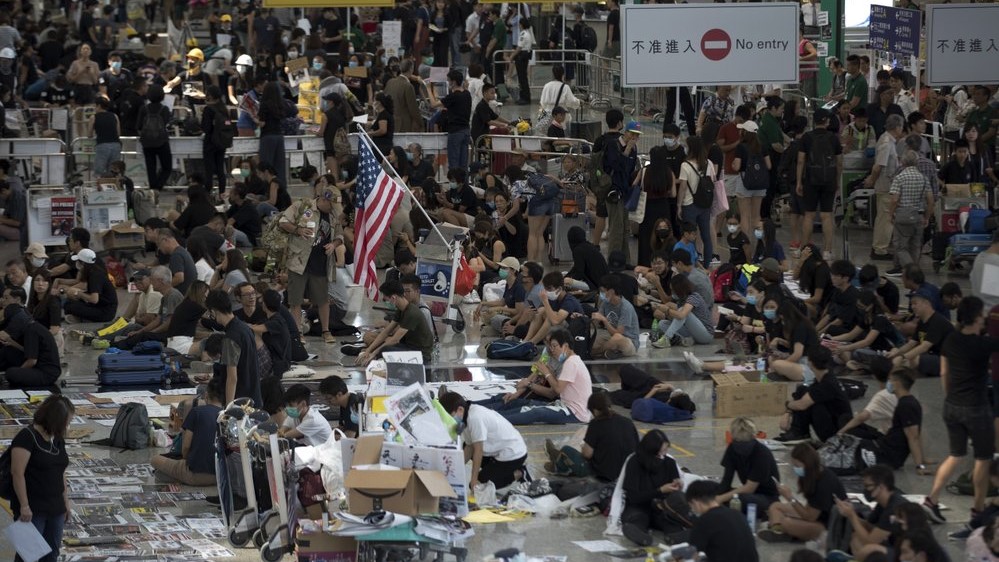 Protesters stage a sit-in rally at the arrival hall of the Hong Kong International Airport in Hong Kong, Tuesday, Aug. 13, 2019. Protesters clogged the departure area at Hong Kong's reopened airport Tuesday, a day after they forced one of the world's busiest transport hubs to shut down entirely amid their calls for an independent inquiry into alleged police abuse. (AP Photo/Vincent Thian)

Protesters severely crippled operations at Hong Kong’s international airport for a second day Tuesday, forcing authorities to cancel all remaining flights out of the city after demonstrators took over the terminals as part of their push for democratic reforms.

It said it did not expect arriving flights to be affected, though dozens were already cancelled. The authority advised people not to come to the airport, one of the world’s busiest transport hubs.

On Monday, more than 200 flights were cancelled and the airport was effectively shut down with no flights taking off or landing.

Passengers have been forced to seek accommodation in the city while airlines struggle to find other ways to get them to their destinations.

The airport disruptions are an escalation of a summer of demonstrations aimed at what many Hong Kong residents see as an increasing erosion of the freedoms they were promised in 1997 when Communist Party-ruled mainland China took over what had been a British colony.

Those doubts are fueling the protests, which build on a previous opposition movement that shut down much of the city for seven weeks in 2014. That movement eventually fizzled out and its leaders have been jailed on public disturbance charges.

The central government in Beijing has ominously characterized the current protest movement as something approaching “terrorism” that poses an “existential threat” to the local citizenry.

While Beijing tends to define terrorism broadly, extending it especially to nonviolent movements opposing government policies in minority regions such as Tibet and Xinjiang, the government’s usage of the term in relation to Hong Kong raised the prospect of greater violence and the possible suspension of legal rights for those detained.

Meanwhile, paramilitary police were assembling across the border in the city of Shenzhen for exercises which some saw as a threat to increase force against the mostly young protesters who have turned out in their thousands over the past 10 weeks.

Police have arrested more than 700 protesters since early June and say they have infiltrated the ranks of the demonstrators, leading to concerns that officers were inciting violence. Scores of people have been, both protesters and police, including a woman reported to have had an eye ruptured by a beanbag round fired by police during clashes on Sunday.

Police said they are investigating the incident, which protesters have taken up as a rallying cry. Some of those joining in the airport occupation wore gauze bandages dyed with artificial blood over one eye.

The United Nations’ top human rights official condemned violence surrounding the protests and called on the authorities and protesters to settle their dispute peacefully.

Rupert Colville, spokesman for U.N. High Commissioner for Human Rights Michelle Bachelet, said her office had reviewed evidence that police are using “less-lethal weapons in ways that are prohibited by international norms and standards.” That includes firing tear gas canisters into crowded, enclosed areas and directly at individual protesters, “creating a considerable risk of death or serious injury,” Colville said in a statement Tuesday.

The commissioner urged both sides to engage in “open and inclusive dialogue,” which is the “only sure way to achieve long-term political stability,” it said.

Hong Kong leader Carrie Lam said the instability, chaos and violence have placed the city on a “path of no return.”

The demonstrators have shown no sign of letting up on their campaign to force Lam’s administration to respond to their demands, including that she step down and entirely scrap proposed legislation under which some suspects could be sent to mainland China, where critics say they could face torture and unfair or politically charged trials.

Demonstrators have in recent days focused on their demand for an independent inquiry into what they call the police’s abuse of power and negligence. That followed reports and circulating video footage of violent arrests and injuries sustained by protesters.

Lam told reporters Tuesday that dialogue would only begin when the violence stopped. She reiterated her support for the police and said they have had to make on-the-spot decisions under difficult circumstances, using “the lowest level of force.”

“After the violence has been stopped, and the chaotic situation that we are seeing could subside,” Lam said. “I as the chief executive will be responsible to rebuild Hong Kong’s economy ... to help Hong Kong to move on.”

She did not elaborate on what steps her government will take toward reconciliation. After two months, the protests have become increasingly divisive and prompted clashes across the city.

The airport shutdown added to what authorities say is already a major blow to the financial hub’s crucial tourism industry.

Kerry Dickinson, a traveler from South Africa, said she had trouble getting her luggage Tuesday morning.

“I don’t think I will ever fly to Hong Kong again,” she said.

The protests early on were staged in specific neighbourhoods near government offices. However, the airport protest has had a direct impact on business travel and tourism. Analysts said it could make foreign investors think twice about setting up shop in Hong Kong, which has long prided itself as being Asia’s leading business city with convenient air links across the region.

The black-clad protesters Tuesday held up signs in Chinese and English to appeal to travellers from mainland China and other parts of the world. “Democracy is a good thing,” said one sign in simplified Chinese characters, which are used in mainland China instead of the traditional Chinese script of Hong Kong.

Adding to the protesters’ anger, Hong Kong’s Cathay Pacific Airways told employees in a memo that the carrier has a “zero tolerance” for employees joining “illegal protests” and warned violators could be fired.

While China has yet to threaten to send in the army — as it did against pro-democracy protesters in Beijing in 1989 — the exercises in Shenzhen were a demonstration of its ability to crush the demonstrations, even at the cost to Hong Kong’s reputation as a safe haven for business and international exchange. Images on the internet showed armoured personnel carriers belonging to the People’s Armed Police driving in a convoy Monday toward the site of the exercises just across the border from Hong Kong.

The People’s Liberation Army also stations a garrison in Hong Kong, which recently released a video showing its units combating actors dressed as protesters. The Hong Kong police on Monday also put on a display of armoured car-mounted water cannons that it plans to deploy by the middle of the month.