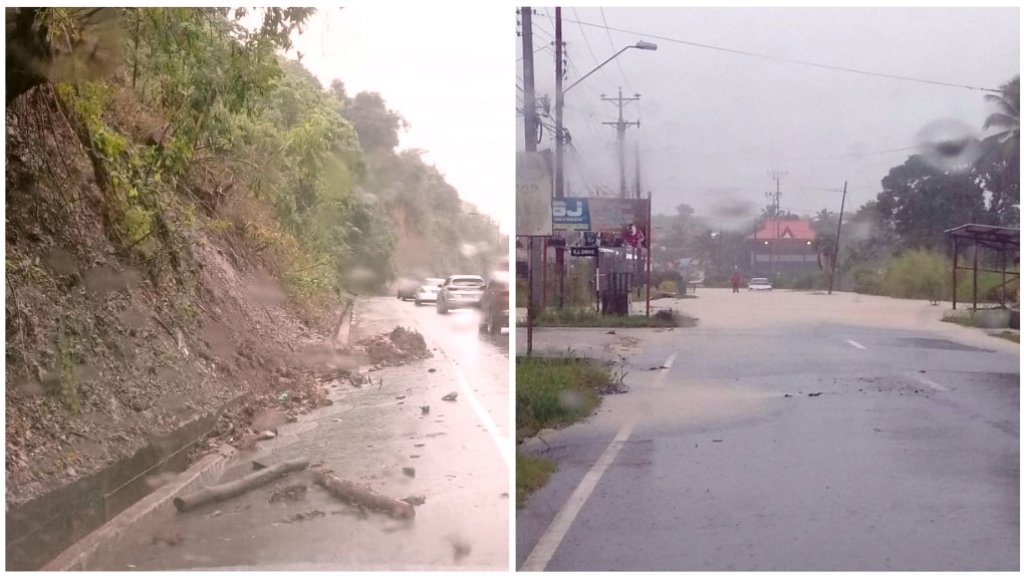 Photo: Heavy rains overnight led to flooding in some parts of North, Central and South Trinidad, along with landslips on the Lady Young Road, on November 15, 2018.

Emergency responders have reported that several rivers have breached their banks and others, such as the Caroni river, are close to reaching their thresholds after heavy showers on Wednesday and Thursday.

An Orange Alert for riverine flooding was issued by the Trinidad and Tobago Meteorological Service and citizens have been advised to stay away from flood-prone areas and roadways if possible.

Overnight rains led to some rivers bursting their banks as well as flooding in parts of North, Central and South Trinidad on Thursday.

Reports of flooding were received in Vega de Oropouche, Sangre Grande, and Foster Road River which burst its banks.

The Marabella River was also nearing its threshold according to midday updates from the Ministry of Rural Development and Local Government, while the Cipero River was also swollen.

According to an update from the Office of Disaster Preparedness and Management, the Arima river at Manuel Congo burst its banks, flooding a bridge crossing. The ODPM also received reports of landslides leaving residents in Aripo marooned.

Landslips were reported along the Lady Young Road, Tortuga and Batchiya Branch Trace #1.

The Ministry of Works and Transport activated the pumps at Bamboo #2 Extension, in order to maintain water levels.

According to an ODPM update at 11:00 am Thursday, affected areas are as follows:

Siparia Regional Corporation:
Reports of flooding in San Francique and parts of Cedros. Steady light rain throughout Siparia. Assessments are currently being conducted by the DMU officers.

Tunapuna Piarco Regional Corporation:
Reports of flash flooding in Trincity and Piarco intersection. High water levels in the Arima River in Manuel Congo and landslides in Aripo where it was also reported that people are marooned. A backhoe and truck have been dispatched and officers are presently on the field monitoring reports.

Point Fortin Borough Corporation:
Reports of streets flooding in Gonzales Village, Guapo and Egypt Village have been confirmed. Presently, officers are out on the field monitoring the situation.

The Ministry said field officers were on location carrying out investigations.

The Ministry of Works issued an update at 1:45 pm on the status of road conditions as follows:

Due to the inclement weather experienced on Thursday 15th, 2018, as at 1:00 p.m. the following reports were received:

- Flooding at 4.8 km Guaico Tamana– Water on edge of roadway

An Adverse Weather Alert (Yellow Level) was issued from Wednesday at 10:00 am until Thursday at 8:00 pm, and citizens are also advised of rough seas until Saturday.

Citizens are advised to monitor weather updates before heading out for their safety.

Citizens are urged to contact their Disaster Management Hotlines if they are in need of assistance: