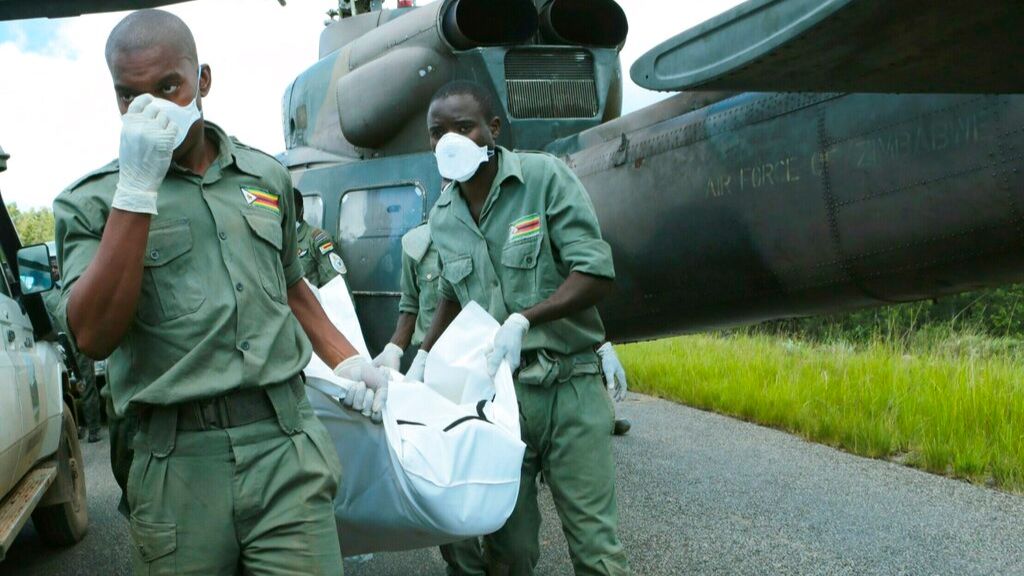 Personnel carry a body from a military helicopter in Chimanimani, about 600 km south east of Harare, Zimbabwe, Wednesday, March, 20, 2019. Hundreds are dead, many more missing and thousands at risk from massive flooding in Mozambique, Malawi and Zimbabwe caused by Cyclone Idai. (AP Photo/Tsvangirayi Mukwazhi)

A week after Cyclone Idai hit coastal Mozambique and swept across the country to Zimbabwe, the death, damage and flooding continues in southern Africa, making it one of the most destructive natural disasters in the region's recent history.

Floodwaters are rushing across the plains of central Mozambique, submerging homes, villages and entire towns. The flooding has created a muddy inland ocean 50 kilometres (31 miles) wide where there used to be farms and villages, giving credence to Mozambican President Filipe Nyusi's estimate that 1,000 people may have been killed.

Torrential rains lifted — at least temporarily — Thursday, and floodwaters began to recede in Beira, the worst-hit city, and in the countryside, according to a Mozambican government report. Aid groups were working non-stop to rescue families clinging to tree branches and rooftops for safety from the surging waters.

"Yesterday, 910 people were rescued by the humanitarian community," said Caroline Haga of the International Federation of the Red Cross in Beira. She said 210 were rescued by five helicopters and 700 were saved by boats.

"We're hoping to rescue as many as we can today as it is not raining," she said. "Rescue activities will continue until everyone is brought to safety."

Aid organizations are trying to get food, water and clothing. It will be days before Mozambique's inundated plains drain toward the Indian Ocean and even longer before the full scale of the devastation is known.

Zimbabwe's eastern mountains have been deluged and the rain is continuing.

Aid has been slow to reach affected villagers due to collapsed infrastructure, although the military has been handing out small packets of cooking oil, maize meal and beans.

Zimbabwean President Emmerson Mnangagwa received a sombre welcome in the eastern town of Chimanimani Wednesday. Zimbabwean officials have said some 350 people may have died in their country. The force of the flood waters swept some victims from Zimbabwe down the mountainside into Mozambique, officials said.

With the search for survivors finished, Philemon Dada is has begun rebuilding his life in Chimanimani, once a picturesque town.

With a machete and a hoe, he began salvaging poles from the mud to construct a hut to shelter his small family, a first step in what he sees as a long and backbreaking journey to rebuild a life shattered by Cyclone Idai.

He is one of many villagers trying to pick up the pieces in Chimanimani after losing homes, livestock and, in many instances, family members. Some have been taken in by neighbours and others are sheltering with church pastors.

"I can say I am a bit lucky, my wife and son are still here with me but for everything else, I have to start from scratch," he said.

Dada has a few food items handed out by the Zimbabwe military, but he knows that like most aid it is unlikely to last long, and he is eager to start growing crops again. Like many people here, he survives on agriculture.

"My bean crop was ready for harvesting before the cyclone, the maize was close. I am back to zero," he said.

He is particularly pained by his two prized bulls that did the heavy work of drawing the plow for his field. They were killed in the floods.

"It may take a year, maybe even more years just to get back on my feet," he said.

Father and son who fled Syria are buried in New Zealand