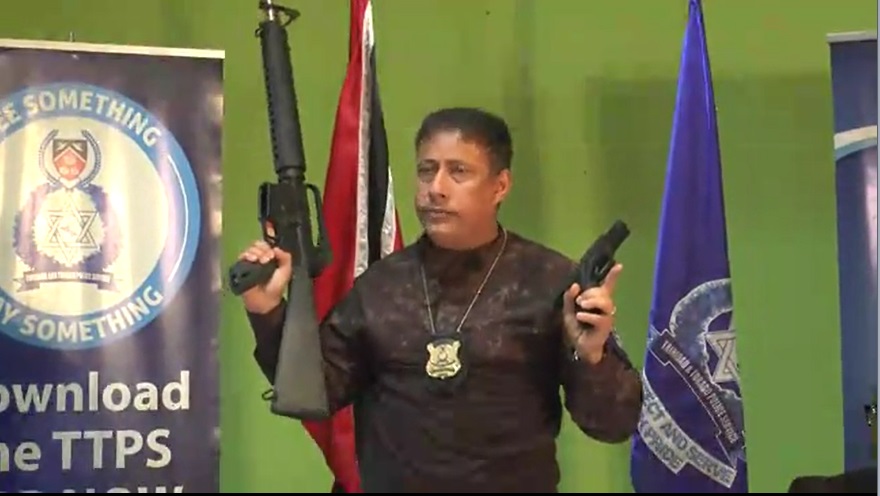 Commissioner of Police, Gary Griffith, is refreshing his call for immediate amendments to the Bail Amendment Bill. He says without it, Trinidad and Tobago will have an increasingly difficult time taking guns and gunmen of the nation’s streets.

Speaking at the Trinidad and Tobago Police Service’s (TTPS) Weekly Media Briefing, Griffith showed the difference between two firearms; one, which had been slated for bail denial six years ago, and another, with a much higher danger level attached, which a holder could attain bail for.

ACP Jayson Forde, also commenting on the matter, said it’s no coincidence that between 2015 and 2019, 79% of homicides were committed using illegal firearms.

“I think the time has come for us to really, seriously consider some type of imprisonment, some type of retardation of freedoms, some type of system whereby when persons are found with these weapons in their possessions, they are not allowed to walk out freely,” he said.

Griffith says it’s impossible for officers to keep doing their jobs, when the same perpetrators are allowed to brandish weapons like these despite their prior convictions.

“It’s like we are fishermen and we’re told every day to go out there and look for sharks, but when we catch the sharks, we are then told to throw it back into the water and then when we get back to shore, persons will then tell us ‘well you have no catch of the day’. Then, when the citizens go out into the water and they are destroyed and killed by the sharks, they want to blame the police,” Griffith said.

The Bail Amendment Bill has had quite a few turns in the parliament as opposition members have been vehemently against denying bail for those arrested with firearms, citing that detainees have a right to bail.

The Bill was last debated one week ago.