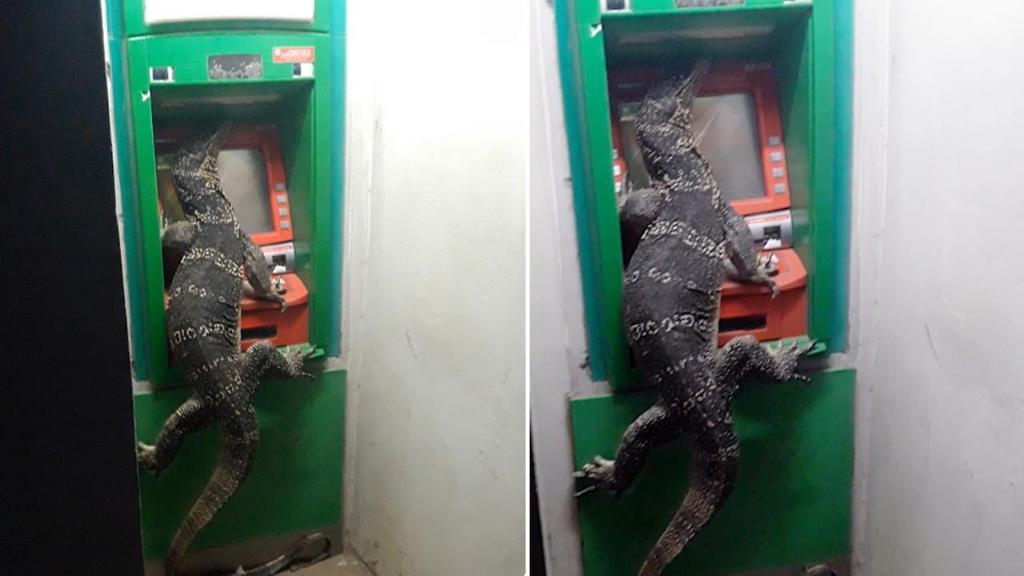 This is the incredible moment a giant monitor lizard was found balancing on an ATM machine in Bangkok, Thailand.

Shocked resident Krittavit Tamchai, 42, spotted the beast when he went to withdraw cash after finishing work on Tuesday.

The terrified office worker immediately stopped and changed his mind when the giant reptile - known for their aggression if provoked - refused to move from the standalone machine.

He said: ''I didn't want to wrestle a monitor lizard to get to the machine''.

Krittavit's mobile phone video shows the six-foot-long monitor lizard with its two hind legs on a ledge and his front claws across the ATM buttons. The reptile appeared to be using its tail to balance while eyeing the digital screen.

Locals gathered round to see the bizarre sight before a security guard arrived to scare away the creature.

Rescue workers then caught it - but unluckily for the lizard, it was empty-handed, having been unable to get its claws on any cash.

Speaking after, Krittavit said: ''I was so shocked and didn't know what to do. I waited for a while just wishing him to move on so I could use the machine, but he didn't. Eventually, I gave up and went to withdraw money somewhere else. There was no way I was wrestling an angry lizard to get to the machine.

''My friends and I have been talking about what he was doing there. Was he really a secretly wealthy lizard trying to make a withdrawal? I think he must have come out of a local canal or drain because of the heavy rain and found himself in this unusual place.''

Girl, 2, eaten alive by crocodiles on family's farm in Cambodia