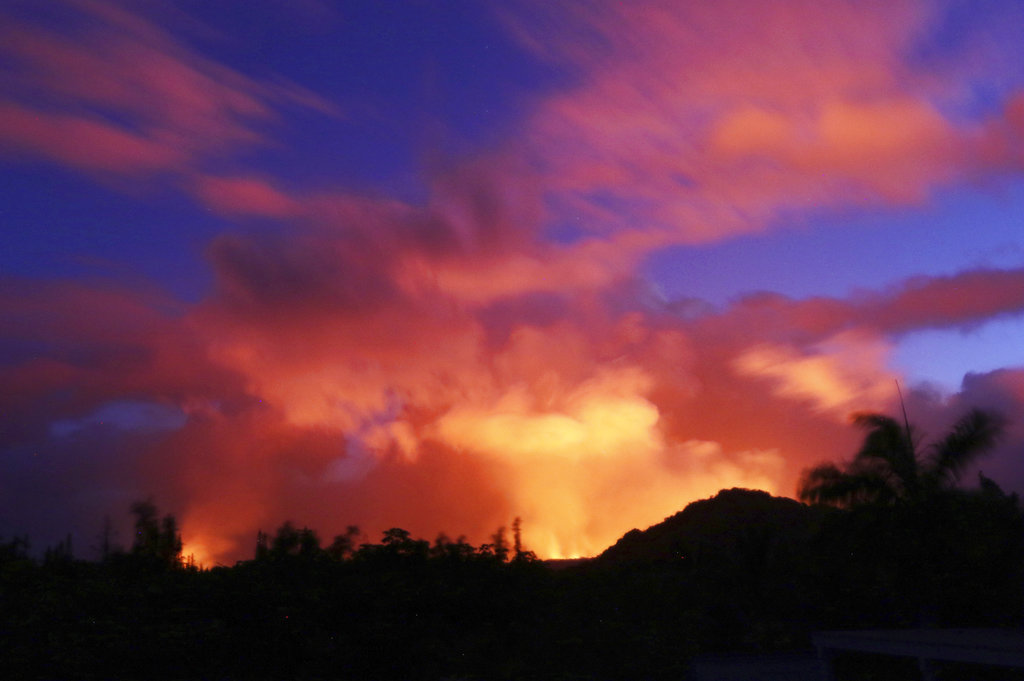 No injuries were reported as most residents heeded the advice to leave.

The latest lost homes were in addition to at least 117 others that were previously reported by officials since lava began spilling last month from cracks in the ground in a mostly rural district of the Big Island.

"We don't have an estimate yet, but safe to say that hundreds of homes were lost in Kapoho Beach Lots and Vacationland last night," Janet Snyder, a spokeswoman for Hawaii County, said Tuesday.

A morning overflight confirmed that lava had completely filled Kapoho Bay, inundated most of Vacationland and covered all but the northern part of Kapoho Beach Lots, scientists with the U.S. Geological Survey's Hawaiian Volcano Observatory said.

County Managing Director Wil Okabe said his own vacation home in Kapoho Beach Lots was threatened. Okabe described the area as a mix of vacation rentals and year-round residences.

"For us, it's more of a vacation area, but for those who live there permanently, they're trying to figure out where they're going to be living," he said. Kim and Okabe live in Hilo, the county's seat, which is more than an hour drive from the Kapoho area.

Gov. David Ige signed a second supplemental emergency proclamation Tuesday that gives the county more options for shelters and sets criminal penalties for violating emergency rules, such as failing to evacuate and interfering with emergency workers.

"It's a necessary evil. It's not our land. It belongs to Pele," he said, referring to the Hawaiian volcano goddess. "I have to imagine she knows what she's doing."

Kapoho resident Mark Johnson was coming to terms with the possibility of losing his home and 5-acre citrus farm.

"I'm really kind of at peace actually," he said. "I've had 28 years of wonderful experience down there in Kapoho."

Johnson and Pomerleau evacuated last week when authorities with bullhorns arrived at 1 a.m. saying it was time to get their things and leave.

They didn't expect the lava flow to head their way.

"God only knows what it's going to do next," Johnson said.

He wants to return if lava spares his home on a ridge overlooking the ocean. But it's unclear how long it would take to re-open access to the area, he said.

Pomerleau said all of the vacation homes he did handyman work for are gone.

Thousands of people in the Puna area had to evacuate after the first fissure opened May 3. Officials issued mandatory orders for residents of Leilani Estates, and those in Kapoho Beach and Vacationland were advised to leave last Friday or risk being trapped and unreachable by emergency crews.

Homes in Kapoho Beach Lots and Vacationland are on smaller lots and closer together than those in other parts of the Puna district. Okabe estimated there are several hundred homes in each of the two subdivisions.

Those who live or vacation in the area were mourning the loss of popular tide-pools where kids enjoyed swimming.

"That coastline is really important to us— a place where we spent time with our family," said Franny Brewer who lives in upper Puna.

She reminisced about taking her daughter to swim in the ocean for the first time in a local swimming spot known as Champagne Ponds.

"I've been crying a lot," she said. "It's hard because obviously a lot of people have lost a lot more than just a beautiful place to visit and memories."