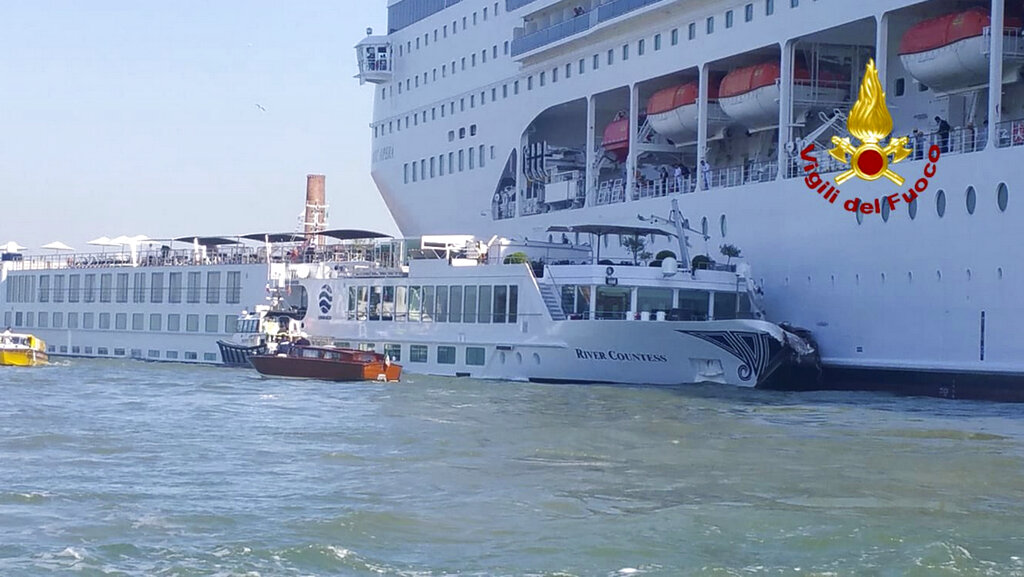 In this photo released by the Italian Firefighters, the MSC Opera cruise liner, a towering cruise ship, strikes a tourist river boat, left, Sunday, June 2, 2019, in Venice, Italy, injuring at least five people. The collision happened at about 8:30 a.m. on the Giudecca Canal, a major thoroughfare that leads to Saint Mark's Square. (Vigili del Fuoco via AP)

A towering, out-of-control cruise ship rammed into a dock and a tourist riverboat on a busy Venice canal on Sunday morning. Italian media reported that at least five people were injured in the crash.

The collision happened about 8:30 a.m. on the Giudecca Canal, a major thoroughfare that leads to Saint Mark's Square in the northeastern Italian city.

Videos of the crash show the cruise ship, apparently unable to halt its momentum, blaring its horn as it plows into the much smaller riverboat and the dock as dozens of people run away in panic.

Venice is a tremendously popular site for both tourists and cruise ships, especially during the summer tourist season.

The cruise ship's owner, MSC Cruises, said the ship, the MSC Opera, was about to dock at a passenger terminal in Venice when it had a mechanical problem. Two towboats guiding the cruise ship into Venice tried to stop the massive cruise ship, but they were unable to prevent it from ramming into the riverboat.

"The two towboats tried to stop the giant and then a tow cable broke, cut by the collision with the riverboat," Davide Calderan, president of a towboat association in Venice, told the Italian news agency ANSA.

Calderan said the cruise ship's engine was locked when the captain called for help.

Following the accident, calls for banning cruise ships in Venice, long a source of contention in the over-extended tourist city, were renewed.

The MSC Opera was built in 2004. It can carry over 2,675 passengers in 1,071 cabins. According to its sailing schedule, the cruise ship left Venice on May 26 and travelled to Kotor, Montenegro, and Mykonos, Santorini and Corfu in Greece before returning Sunday to Venice.