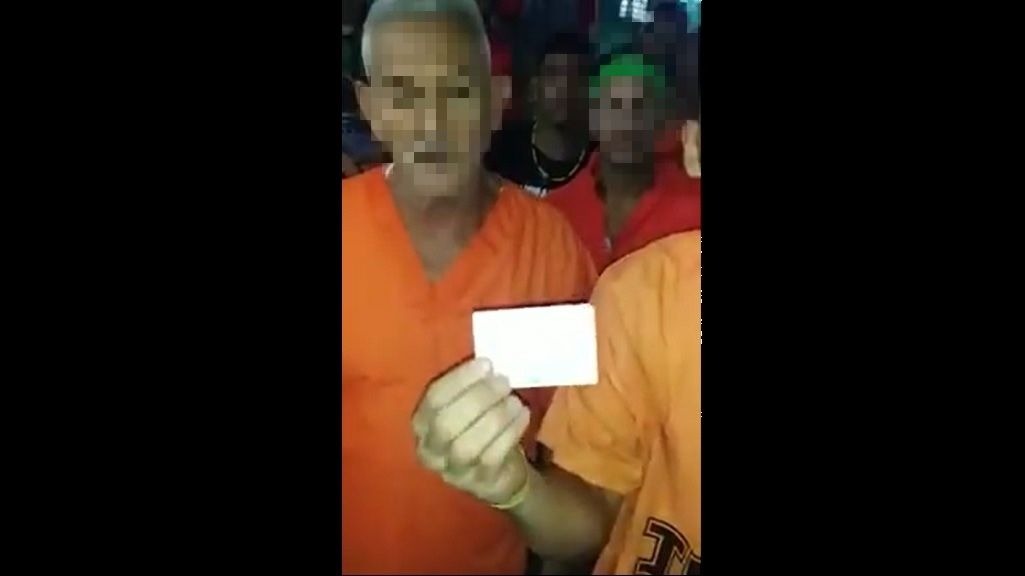 Photo: An elderly detainee at the Immigration Detention Centre showed a card he received from the Living Water Community as proof he is an asylum seeker. A video of the group was shared to social media on June 4, 2019, with inmates vowing to go on a hunger strike until they are freed.

Video footage showing detainees at the Immigration Detention Centre, calling for aid and vowing to begin a hunger strike, has been shared online.

The detainees are begging for assistance, saying they have been detained for months without any updates regarding their matters.

Police sources confirmed that they received a report that at least 60 of the detainees refused meals up to Monday evening.

(Video: One man said he required surgery after becoming ill with gastro-enteritis. Another elderly man said he has since paid his fine but was still not released from the IDC, although he received a card from the Living Water Community showing he is an asylum seeker. Translation courtesy Rainier Hospedales.)

They were told that the detainees are refusing food as a means of protest due to what they perceive as unfair detention.

One individual, who spoke both English and Spanish, translated for his inmates and showed one man who had recently had surgery, lifting a bandage to reveal an incision on his stomach. He said the man should not be held in unsanitary conditions.

Another elderly man shared what he said was an identification card from the Living Water Community confirming his status as an asylum seeker - the translator said he had willingly turned himself into the IDC on the promise that his matter would be dealt with quickly. However, months later, the man said he has had no update on his case.

Police were told that some were detained for over a year, without “answers” as to what is going on with their matters.

LoopTT has reached out to the Ministry of National Security, which oversees immigration matters, for comments.