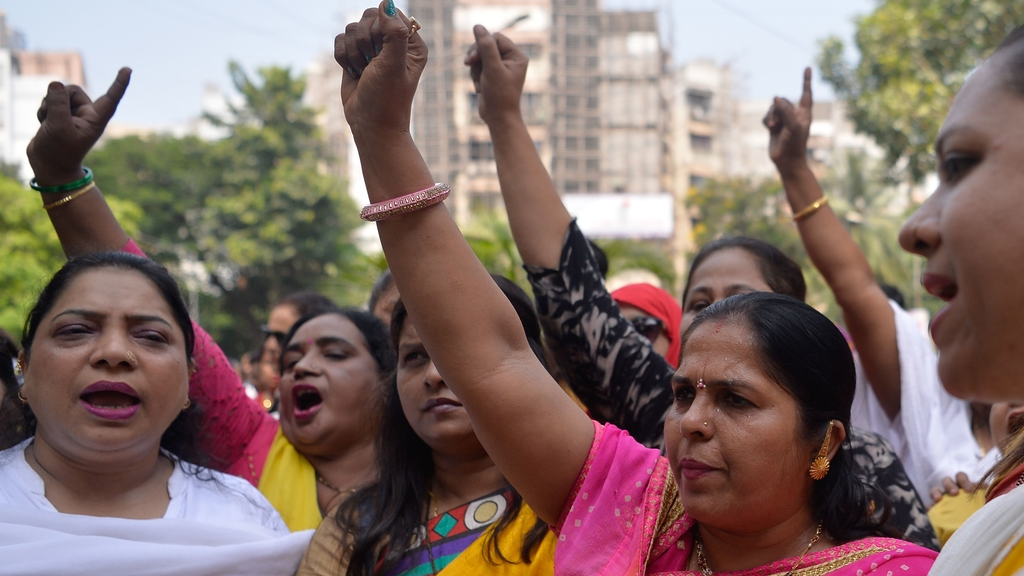 Indian actresses and writers have flooded social media in recent days with allegations of sexual harassment and assault, releasing pent-up frustration with a law that was lauded internationally but which critics say has done little to change the status quo in the world's largest democracy.

"Now that women are coming out openly, publicly, we have to encourage them," said Maimoona Mollah, President of All India Democratic Women's Association (AIDWA).

"We have to support them. And instead of that support, you are dissuading them. You are trying to malign them," she added.

The Sexual Harassment of Women at Workplace Act of 2013 holds Indian workplaces liable for sexual harassment, and prescribes a system for investigating and redressing complaints.

Employers must create committees that are at least 50 percent women, presided over by a woman and with one external expert, to process complaints.

The law builds on the landmark 1997 Vishakha case, in which India's Supreme Court held that sexual harassment at work violated a woman's constitutional right to equality.

But nearly five years since the law came into effect, many managers and employees are not aware of it.

Those who are rarely implementing it fully, in part because of the enormous taboo in India of discussing anything related to sex, said Naina Kapur, the attorney who argued the Vishakha case before the Supreme Court.

Based on the nonstop TV coverage, alleged victims are making themselves heard on social media, bypassing completely the protocol created by the 2013 law.

The social media storm began in September, when former Bollywood actress Tanushree Dutta spoke to several Indian TV news channels about her frustration with a fruitless police complaint she filed in 2008 against actor Nana Patekar for alleged sexual harassment on a Mumbai movie set.

Dutta said that after Patekar groped her during a dance routine, she fled the set and a mob surrounded her car, smashed the windshield and trapped her inside.

Patekar has denied the allegations.

Then on October 4, Mumbai comedy group AIB announced it had decided to de-list every video featuring former member Utsav Chakraborty, whom women had taken to social media to condemn for alleged sexual harassment.

On October 7, an unnamed former employee at Phantom Films writing in the Huffington Post described allegations she had made in 2015 against one of the company's partners, director Vikas Bahl, whom she said behaved inappropriately during a trip to Goa.

Also on October 8, journalist Sandhya Menon shared screenshots of her conversation with two women claiming that actor Rajat Kapoor harassed them over the phone.

Kapoor apologised on Twitter if he had "slipped and through my actions or words caused pain or hurt."

That same day, former TV producer, director and writer Vinta Nanda said on Facebook and in TV interviews that she was raped 19 years ago by actor Alok Nath.

Nath said in a TV interview that he neither denied or agreed with the allegations. "It must have happened, but someone else would have done it," Nath said.

TV actress Sandy Mridul expressed her support for Nanda in a Tweet.

Fellow TV actress Deepika Amin followed on Twitter: "Everyone in the industry knows that #AlokNath is an obnoxious drunkard who harasses women."

On October 10, actor and heavyweight Bollywood producer Aamir Khan and his wife Kiran Rao put out a statement saying they were "committed to doing any and everything to make our film industry a safe and happy one to work in."

In a Tweet, Khan said they were about to begin work with someone who had been accused of sexual misconduct and that the matter was pending in court.

Perhaps the most startling development has been the string of accusations against Junior External Affairs Minister M.J. Akbar.

In less than a week, at least nine women journalists have accused Akbar of sexual harassment and inappropriate behavior when he was a newspaper editor in Kolkata and Delhi.

Neither Akbar nor the ministry has responded.

Mumbai police on Thursday said they had opened an investigation into Patekar after Dutta filed a fresh complaint, charging him with violating two sections of the Indian Penal Code related to offending a woman's modesty.

If found guilty, the maximum penalty is two years in prison.

Dutta said that after the alleged attack in 2008, she also lodged a complaint with Cine and TV Artists Association (CINTAA), an agency now subject to the 2013 law.

Dutta's lawyer, Nitin Satpute, said Dutta decided to speak out again about what allegedly happened to her in 2008 because she hoped the spotlight would help enforce the workplace sexual harassment law within CINTAA.