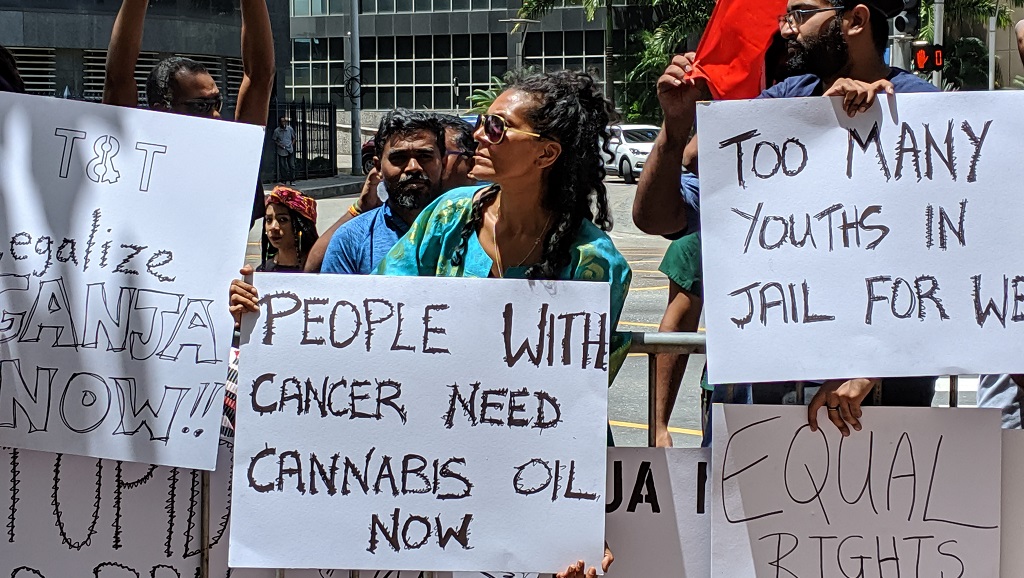 Cannabis supporters gathered outside the Parliament building on Wednesday, once again calling on government to help sick people in need of cannabis medication by allowing the importation of medical cannabis products.

One protester called for an end to the ban on marijuana, which was created by God.

Founder of the Caribbean Collective for Justice, Nazma Muller, alongside representatives from other pro-cannabis groups, held up placards calling for MPs to bring a motion to issue medical licenses for cannabis medical products, which is provided for under the Dangerous Drugs Act.

Speaking to media, Muller called on MPs to bring forward a motion to allow for the issuing of medical licenses, which is provided for under the Dangerous Drugs Act.

Under Section 4 of the Dangerous Drugs Act, the Health Minister may, “subject to Regulations made under section 57— (a) issue licences for the import, export, diversion, sale, manufacture, production or distribution, at a stated place, of any dangerous drug; (b) issue licences for the cultivation, gathering or production, at a stated place, of opium poppy, marijuana, or coca plant; (c) name the ports or places in the Territory where any dangerous drug may be exported or imported; (d) prescribe the manner in which any dangerous drug is to be packed and marked for export.”

Under Section 57 of the Act, the Minister may make regulations “for the use, purchase, sale or possession of any dangerous drugs for medicinal or scientific purposes”.

Muller said prior to the demonstration she was contacted by Minister in the Ministry of the Attorney General, Fitzgerald Hinds, who said that the process to decriminalise marijuana was in motion but that it would take time.

However Muller said however that people dying of cancer are running out of time.

"Faris al Rawi assured me - a year ago - when I attended a meeting with him and Mr Hinds at the Office of the Attorney General that licences could and would have been issued to very ill patients."

"Yet here we are, with so many people in pain and suffering from cancer, tumours, Parkinson's, rheumatoid arthritis, irritable bowel syndrome, Crohn's disease.... the list goes on. If I had a gallon of ganja oil, it would go in minutes to the many people who contact me every day for some," she said in a Facebook post.