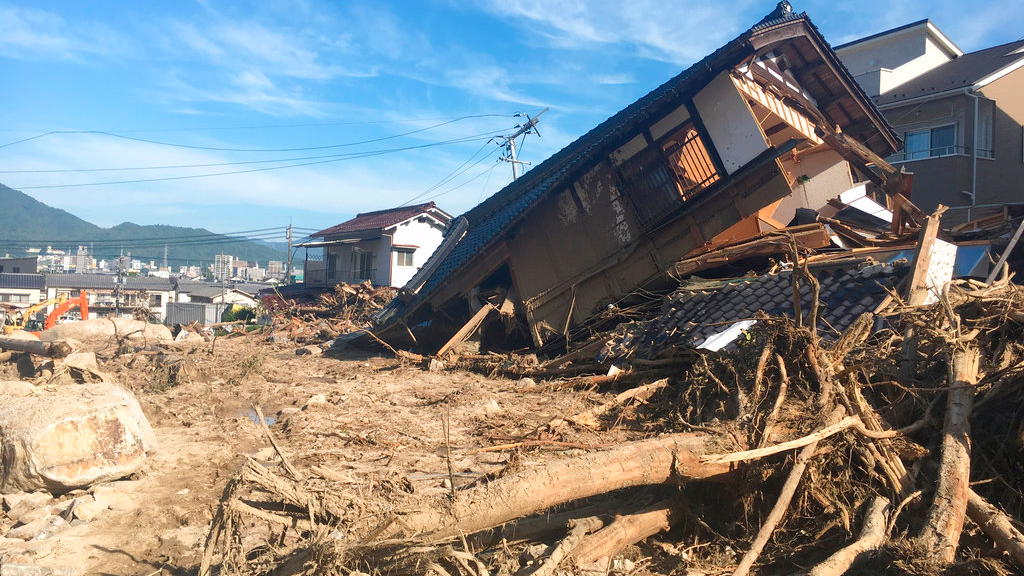 Residents shovelled mud and debris to clear streets so they could get out for food and other supplies Wednesday in areas of western Japan hard hit by landslides and flooding that still swamped some areas.

Prime Minister Shinzo Abe visited an evacuation centre in the city of Kurashiki in Okayama prefecture, where more than 40 of the 176 victims died. He ducked in front of an elderly woman sitting on the floor, and pledged to her that his government will do its utmost to bring back her ordinary life as soon as possible. About 200 residents were taking refuge at the shelter he visited.

Tens of thousands of rescue and recovery workers and volunteers were searching for people still missing.

In areas where search-and-rescue operations had ended, construction workers and residents worked in neighbourhoods to clear mud and debris and restore vehicle access to the outside and get supplies and food.

In Hiroshima's Asakita ward, resident Nobuaki Hyuga walked to a neighbourhood convenience store but could only find ice cream and juices, so he had to go further to find bread and other foods. "We are cut off from the road and we can't go anywhere by car," Hyuga said.

Construction worker Fukuyoshi Doi volunteering to get that done, and supervised other volunteers who gathered to help.

"Mud and dirt is still blocking our local bus route, so we are trying to get that out of the way, so the road can be reopened for buses and cars," he said. "Once we get the mud out, I believe the rest of the work would pick up."

The government said 176 people have been confirmed dead after the record-setting rainfall last week caused severe flooding and landslides. Most of the deaths were in Hiroshima and the surrounding area, but the damage was widespread.

The government has mobilized 75,000 troops and emergency workers and some 80 helicopters for the search and rescue effort, Chief Cabinet Secretary Yoshihide Suga said.

Delivery companies Sagawa Express Co. and Yamato Transport Co. and cargo service Japan Freight Railway Co. said some of their shipments to and from the flooded areas have been suspended or reduced. Supermarkets have closed stores or shortened hours due to delivery delays and supply shortages.

Thousands of homes were still without clean water and electricity. Residents lined up for water under a scorching sun as temperatures rose to 35 Celsius (95 Fahrenheit), raising the risk of heat stroke.

Suga said earlier the government was spending 2 billion yen ($18 million) to hasten deliveries of supplies and other support for evacuation centres and residents.

Abe cancelled a planned trip to Europe and the Middle East this week to oversee the emergency response.