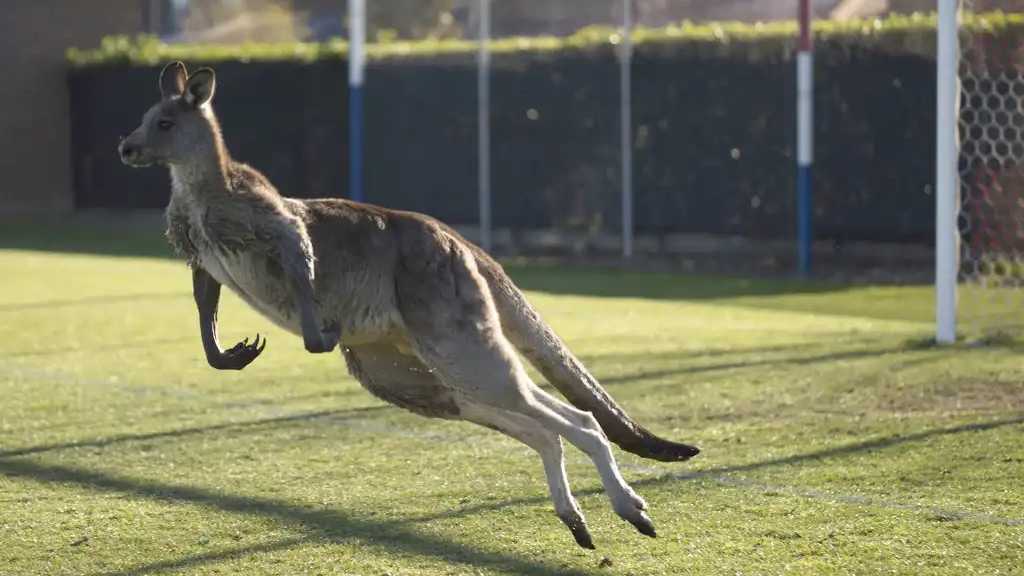 In this June 24, 2018, photo, a kangaroo interrupts the Women's Premier League between Belconnen United and Canberra FC match in Canberra for over 30 minutes. (Lawrence Atkin/Capital Football via AP)

The Australian soccer team competing at the World Cup is called the Socceroos. But a different kind of soccer-roo has dominated a pitch for half an hour in Canberra during a women's match.

The misguided marsupial made its first appearance on the stadium soccer field during the halftime break on Sunday afternoon in a match between Canberra's two top teams — Canberra Football Club and Belconnen United, Canberra FC official Amber Harvey said on Monday.


The male eastern gray kangaroo bounded back during the second half, indifferent to efforts to drive him away and delaying play for 32 minutes, Harvey said.

"It was just a real menace," Harvey said.

"A few people came close to it to see if they could maybe get it to move on. It stood up pretty tall. I think it was just over 6 feet (183 centimetres), so they backed off pretty quickly. But I don't think anyone was alarmed too much by it," she added.

Players and officials tried to drive the unexpected pitch invader away by kicking balls at him with little impact. A video showed it apparently using his long hind legs and powerful tail to deflect balls from the goal area.

"It didn't react. It just kind of lay down," Harvey said.

A coach in a pickup truck eventually chased the roo from the stadium through a break in the fence into a car park from where it disappeared.

Although the match was played in the exclusive inner suburb of Deakin, kangaroos can be found almost anywhere in Canberra, the national capital.

The suburbs are set in large tracts of woods and grassland. Kangaroos usually doze among the trees by day and wander the streets at night to graze on watered lawns.