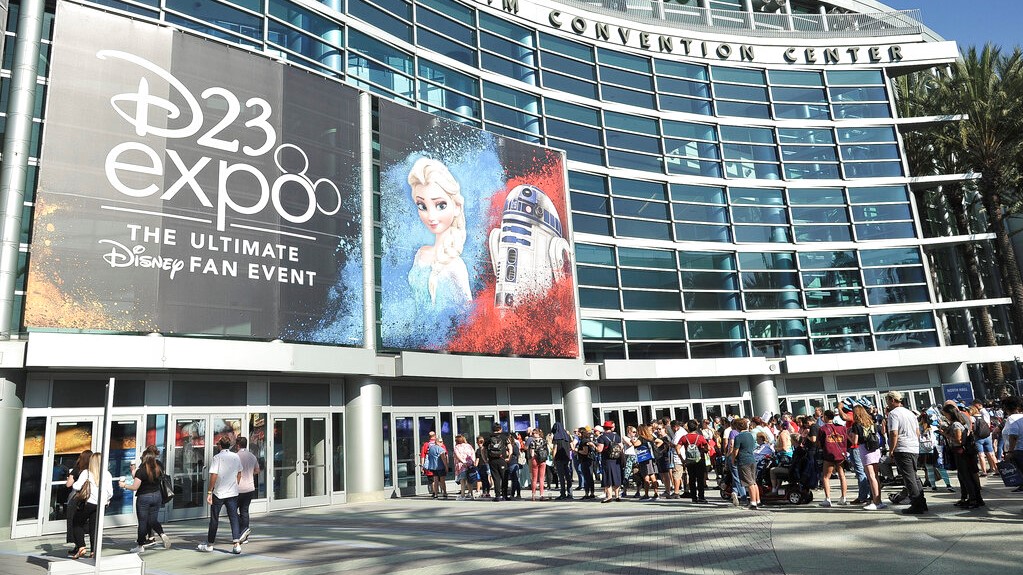 People line up in front of the Anaheim Convention Center during the 2019 D23 Expo on Saturday, Aug. 24, 2019, in Anaheim, Calif. (Photo by Richard Shotwell/Invision/AP)

Tom Holland has made an appearance at a Disney fan convention amid the news that Spider-Man will no longer be part of the Marvel Cinematic Universe.

Earlier this week, it was reported that the cross-studio partnership between Disney and Sony, which allowed Holland's Spider-Man to appear in Marvel films, was ending. Marvel also helped produce the stand-alone Spider-Man films such as this summer's "Far From Home."

Holland was not at D23 Saturday on behalf of Marvel, however, but Pixar. He's voicing a role in the upcoming animated film "Onward."

The nearly 7,000 people in the audience screamed wildly for Holland. He did not address Spider-Man specifically but told the audience that it's been a crazy week and cryptically quoting Tony Stark in "Avengers: Endgame," added: "I love you 3000."

Jamie Foxx and Tina Fey are lending their voices to the new Pixar film "Soul."

Docter, in his first appearance on stage as the chief creative officer of the shop behind "Toy Story," says that "Soul" imagines that every human attends a pre-birth seminar where they're given quirks, interests and passions.

Foxx voices the lead character Joe, who is a jazz musician and middle school band teacher.

Jon Batiste is contributing original songs for the film and Oscar-winners Trent Reznor and Atticus Ross are doing the score.

Lucasfilm President Kathleen Kennedy says that "Star Wars: Episode IX — The Rise of Skywalker" is going to be an incredibly good time.

Nearly 7,000 people got a look Saturday at a new poster and some new footage from the film at the Walt Disney Co.'s biannual D23 fan convention in Anaheim.

The film which opens in theatres nationwide December 20 closes out the over 40-year-old Skywalker saga. Kennedy was joined on the convention stage by writer-director J.J. Abrams and stars including Daisy Ridley, John Boyega, Oscar Isaac, Billy Dee Williams and Anthony Daniels.

R2-D2 evoked the most applause from the excited audience.

Abrams said that the late Carrie Fisher is also part of "Episode IX" thanks to unused footage from "Episode VII."

Spider-Man is out of the Marvel Cinematic Universe

Black Panther 2 confirmed for May 2022