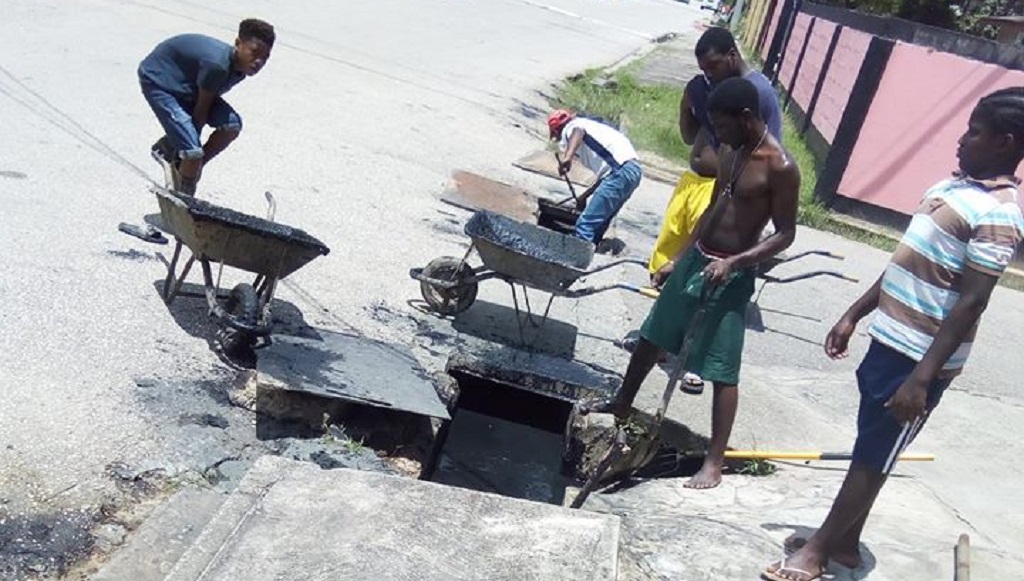 Photo: Youths from the Beetham community band together to clean drains after recent flooding. Without money for safety equipment many are at risk of injuries and ailments. They are asking for assistance before more flooding occurs. Photo courtesy Kareem Marcelle.

Waist-deep in drains filled with effluent and chemical waste from nearby businesses, approximately 46 young men have gathered together to clean their communities after torrential flooding from recent heavy rains destroyed a number of homes in Beetham.

Makandal Daaga law scholarship winner Kareem Marcelle, who encouraged the young people to come together, said the group has been working since last Friday in a bid to show that there are honest, hardworking people within the Beetham community and that they have taken initiative instead of waiting on help that seldom comes.

Speaking to LoopTT, Marcelle said the young men are endangering themselves as they do not have proper health and safety equipment and the stench, as well as the contamination of working in the drains, may make them ill.

Marcelle said he has been asking for donations after a local sewer line burst, leaving residents with no clean drinking water.

"Persons homes were flooded out, some as high as five and six feet. Some people lost everything. So we asked them what they need immediately, and they said firstly that (dirty) water was still coming out of their pipes. A burst sewer line means dirty water is coming out of the sinkholes and the taps, so no one can drink the water. So we have been providing water since Wednesday for affected households."

Marcelle said he has been liaising with Minister Lovell Francis who has been assisting with procuring sponsorship. Trade Minister Paula Gopee-Scoon also assisted in securing business sponsors who donated water.

"We got some basic cleaning supplies and gave them out to each home but many of our elderly aren't physically able to clean their homes for themselves," he said.

Marcelle said since then he and other young men gathered together to help clean the homes of elderly persons, and on Saturday they began cleaning the drains.

He said URP crews who are assigned to clean the area do not stay for their allotted hours and do not properly clean these areas, and said they took it upon themselves to tackle the sludge which was over three feet thick in some places.

He said that many people in the community do pay taxes and deserve to have their areas kept clean as well.

"People pay taxes and we deserve to have things like maintenance of our drains, so we have decided to do it," he said.

"It's at least three feet of thick slush that we have to clean, and this is because it was not cleaned in over six years," he said.

Marcelle said they are asking for supplies to help the men with their tasks, such as heavy equipment, safety clothing such as gloves, boots, shovels, wheelbarrows and other relevant tools to help them clean the area. 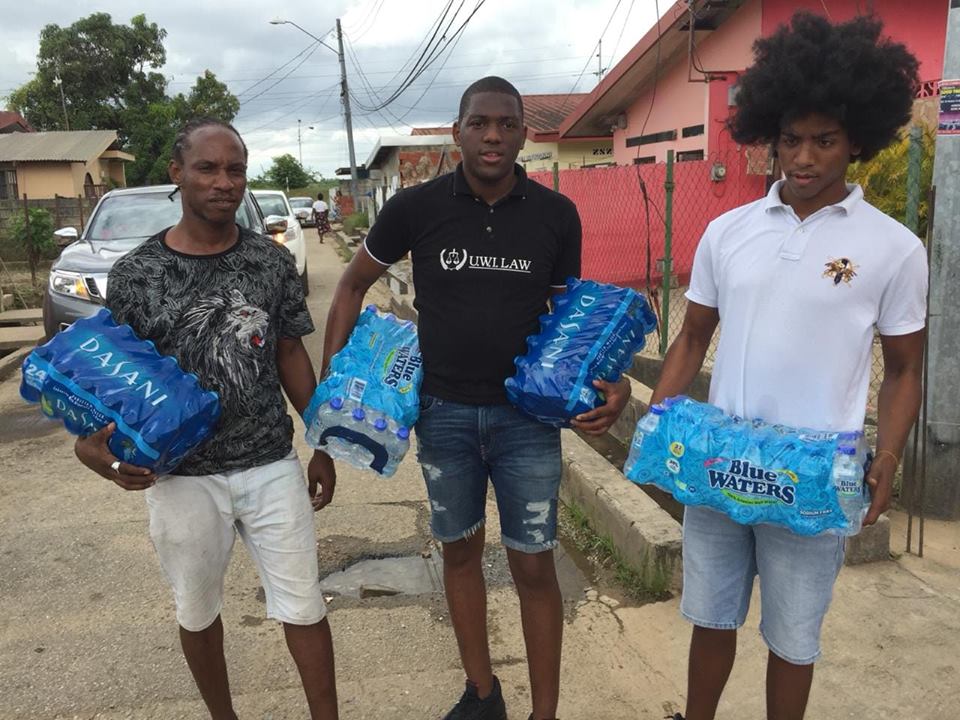 (Photo: Marcelle and members of the community hand out drinking water to flood-damaged homes.)

Marcelle said that this is clear that there are hardworking young people who are in need of jobs and are willing to do the work.

"We have hardworking young men who are willing to do the job and just want that opportunity. If we can do this for free, imagine what we can do if you pay these young men and keep them sustainably employed, imagine what they can do."

"It's very unhealthy, it's very dangerous, but at the end of the day if we wait and rain comes back and it floods the way that it's flooding, then what will happen? This is the first time that our community has flooded in this magnitude," Marcelle said.

He added that contrary to the opinion of many, the flooding is not caused only by pollution within the Beetham community as the flood waters drain from the surrounding hills as well as nearby industrial compounds. 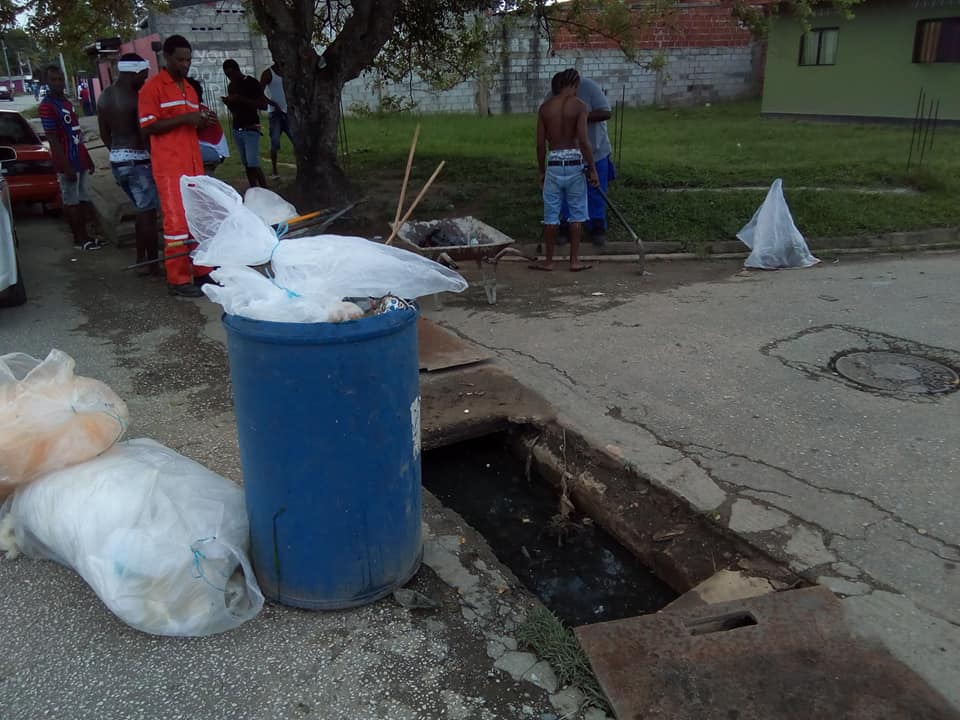 Members of the Rose Foundation also assisted in providing meals for families affected by the flooding as well as the men working to clean the drains.

“There are comments like 'Beetham people nasty' and lazy, but most of our community has come out and apologised and they are the real victims. I'm asking for people to put politics aside and let's do the work that we need to do. We did this and received not one dollar for it,” Marcelle said, who added that he has spent much of his private funds on this initiative.

He added that he will be meeting with community members, urging them for a more constructive approach when dealing with issues they need to be addressed.

He also thanked head of Fixin' T&T Kirk Waithe, who has also assisted in donating food supplies and water.

He said they will be writing to corporate bodies to help sponsor with the clean-up activities.

Anyone who can assist with the donation of safety equipment and cleaning equipment and supplies is urged to contact Marcelle on 371-9683 or email kareemmarcelle17@gmail.com