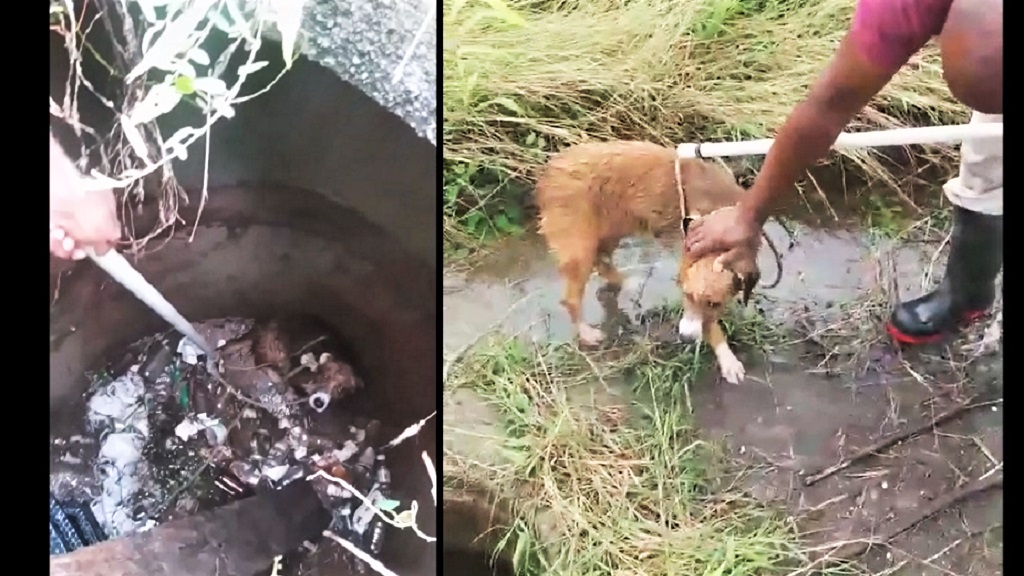 One lucky doggie was rescued

One lucky doggo had a close call after falling into an open manhole which was partly concealed by overgrown bush.

Ricardo Meade, head of the El Socorro Centre for Wildlife Research, shared a video of the rescue after the dog was discovered in Reform Village by a resident.

The dog, seen at the bottom of a drain, was in peril as the drain was filling with water due to heavy rains.

"Today we got a call from a man desperate to get a dog out of a manhole near his home. (Some wonderful citizen removed all the covers in the area) It was raining heavily and he was fearful that by the time he got help the dog may drown as the water level continued to rise."

Meade said that although his organisation focuses mainly on rescuing and rehoming wild animals, he could not turn his back on an animal in need.

"While we do not deal with domesticated animals we could not turn our back this animal in need. We quickly mobilised and were able to get the little girl out of danger."

He also thanked the resident for his action in contacting him to rescue the animal.

"Much thanks to the good people who called because they care. We need more people like that in this world," he said.

Several citizens praised their actions for rescuing the little doggo.

Anna Bandoo: "Hope the manhole was covered to prevent this from happening again. Great job as always Ricardo."

Valerie Douglas Wolfrey: "Yes we do need more people like that! This is why we LOVE YOU GUYS! Good hearts! Nice work and a grateful dog!"

Asha Marajh: "OMG, that is skills! When he pulled her up in one swoop, wow. Thank you for saving her."

Anyone wishing to volunteer or assist the Centre, or anyone wishing to rescue or rehabilitate a wild animal, can contact them on Facebook at https://www.facebook.com/wildlife.tt/ or call 366-4369.