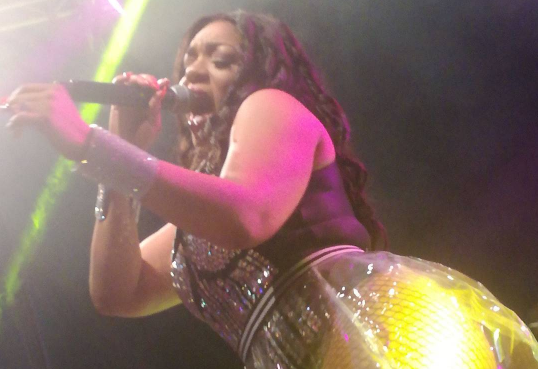 The show of support was a marked difference from 2015 when she first held her annual Carnival show and many artistes didn’t show up.

On Wednesday night however, they came in their numbers to support the Queen of Bacchanal, the biggest surprise of all being Machel Montano who joined Destra on stage for a rendition of “Is Carnival”.

Destra was clearly surprised and pleased to see the King of Soca as she told the crowd he said he couldn’t make it to her show.

It was a fitting high to end the event which seemed to be on shaky ground earlier on and those who left early definitely missed out.

Though patrons started filling the portion of O2 Park allocated for the show from around 9 pm they had to endure hours of DJ music before the show finally got going just after midnight as artistes slowly filed in from other gigs.

David Rudder, fresh off his show Under the Trees at Normandie, opened the show and Destra, dressed in a black gown, joined him on stage to the delight of the fans gathered to see her.

From there it was a fast paced combination of Destra performing her hits with performances from her friends in between.

Orlando Octave was a definite show stealer with his reworked lyrics to “Single” which called on men to protect women.

Devon Matthews, clearly in competition mode for Soca Monarch, also delivered one of his most energetic performances of the season as he sang ‘The Journey” minus his co-singer Ella Andall.

Artistes such as Erphaan Alves and producer Millbeatz were among those spotted in the crowd.