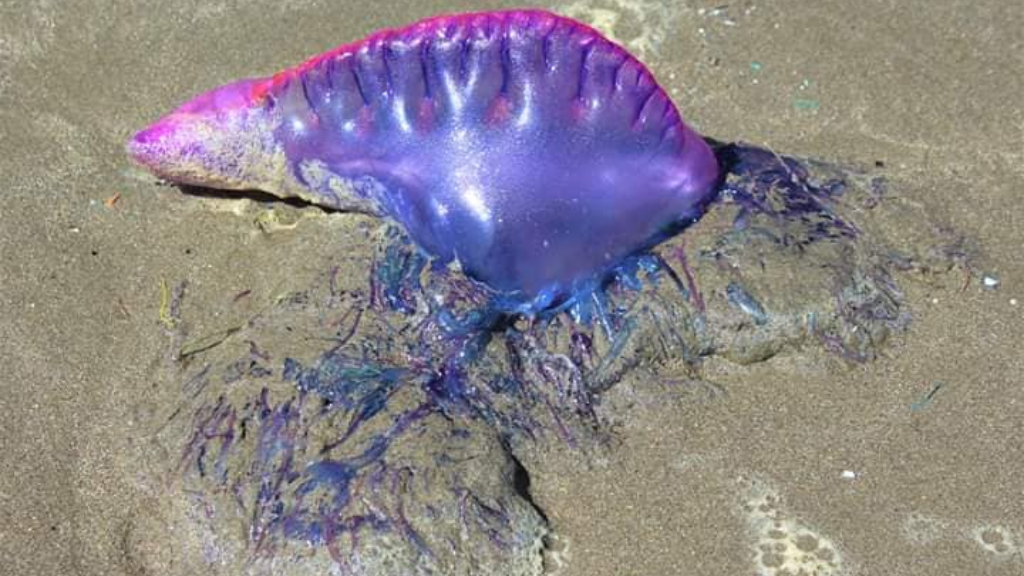 Hundreds of Portuguese Man-O-War have washed ashore on the Manzanilla and Mayaro beaches.

The Office of Disaster Preparedness and Management (ODPM) is warning, however, that citizens should not be tempted to touch the purple-blue coloured creatures as they can deliver a most painful sting.

According to National Geographic, while the Man-O-War resembles jellyfish, it’s a species of the siphonophore which are a group of animals related to the jellyfish.

The Man-o-War has tentacles with venomous stinging cells that can cause extremely painful blistering, stinging and burning sensations to the skin, vomiting and paralysis. The stingers, however, are not venomous to humans.

Symptoms of severe stings and allergic reactions may include difficulty in breathing and unconsciousness.

The Institute of Marine Affairs advised that dead Portuguese Man-O-War coming into contact with the skin can result in stinging sensations for days after its death.

In light of this, the ODPM is encouraging citizens and tourists to exercise vigilance and extreme caution when visiting these beaches.

The ODPM is also urging persons to take the following precautionary measures in the event the Portuguese Man-O-War is sighted:

1. Be cautious about swimming in the sea since the tentacles of the Portuguese Man-O-War may extend far behind or below its float and can break off and drift unseen.

3. Avoid stepping on the colourful float as this leaves the stinging tentacles behind and exposed to others who may be negatively affected by the sting.

In the event that you have been stung by the Portuguese Man-O-War, you are advised to:

2. Administer vinegar (acetic acid) over the affected area(s). Carefully remove the stinging tentacles with a tweezer, stick or leaves and avoid touching them with exposed skin.

3. Avoid rubbing or applying fresh water to the affected area as this may cause untriggered cells to fire and stinging to continue.

4. Immerse the affected area in non-scalding hot water for 30-45 minutes. Persons are advised to report sightings of the Portuguese Man-O-War to their respective Disaster Management Unit of the Ministry of Rural Development and Local Government or the Tobago Emergency Management Agency (TEMA).

Some more facts on the Man-O-War via National Geographic:

The man-of-war comprises four separate polyps. It gets its name from the uppermost polyp, a gas-filled bladder, or pneumatophore, which sits above the water and somewhat resembles an old warship at full sail. Man-of-wars are also known as bluebottles for the purple-blue color of their pneumatophores.

The tentacles are the man-of-war's second organism. They can extend 165 feet in length below the surface, although 30 feet is more the average.

They are covered in venom-filled nematocysts used to paralyse and kill fish and other small creatures.

Man-of-wars are found, sometimes in groups of 1000 or more, floating in warm waters throughout the world's oceans.

They have no independent means of propulsion and either drift on the currents or catch the wind with their pneumatophores.

To avoid threats on the surface, they can deflate their air bags and briefly submerge.

500 bags of trash, 10 truckloads of seaweed collected in Manzanilla