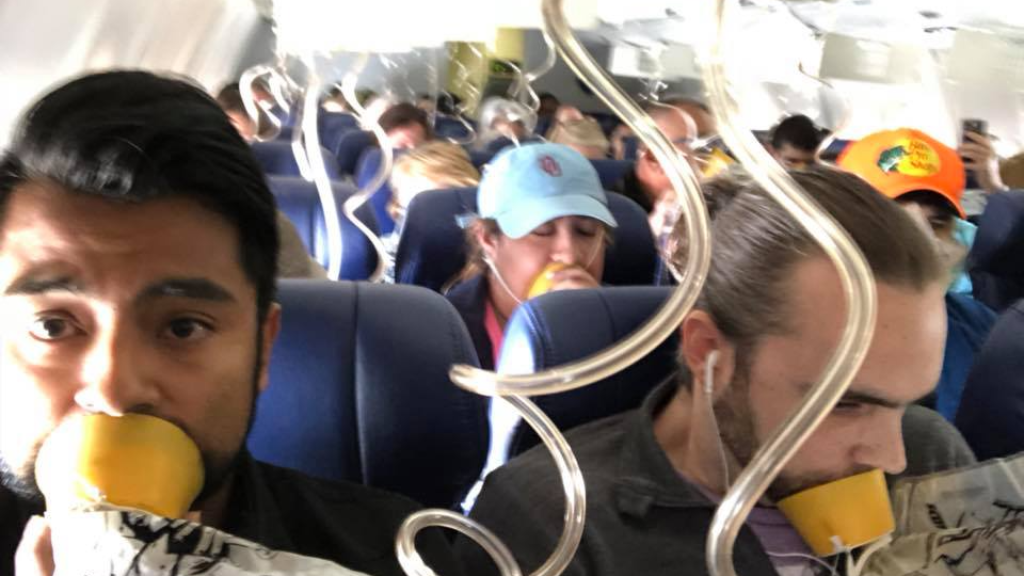 This is the moment that Marty Martinez thought would be his last. 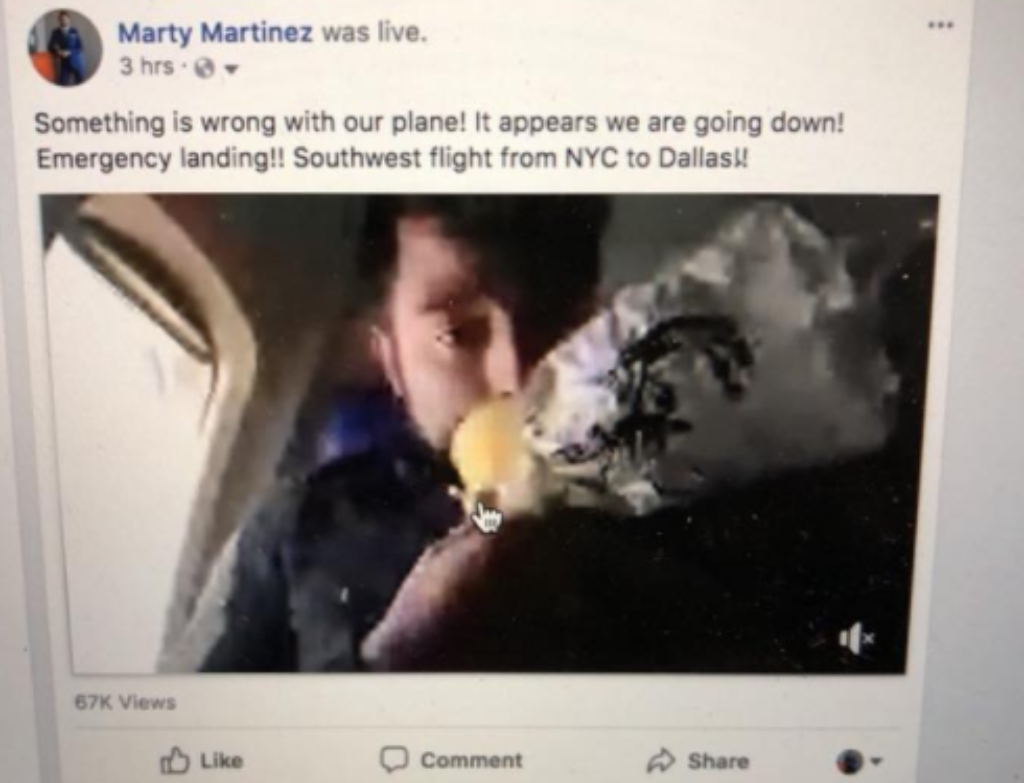 Martinez was a passenger on a Southwest flight from New York to Dallas when one of the engines blew at about 30,000 feet and got hit by shrapnel that smashed a window and damaged the fuselage.

"I literally bought WiFi as the plane was going down because I wanted to be able to reach the people I loved...thinking these were my final moments on earth," Martinez posted on his Facebook. "And put in a position to have to prioritize the people I loved to send them my final words was an absolutely gut wrenching feeling. So I thought to Facebook LIVE my experience, thinking this would be my last communication with the people I loved and my team back home."

The plane, a twin-engine Boeing 737 bound from New York to Dallas with 149 people aboard, made an emergency landing in Philadelphia just before noon as passengers breathing through oxygen masks that dropped from the ceiling said their prayers and braced for impact.

"I just remember holding my husband's hand, and we just prayed and prayed and prayed," said passenger Amanda Bourman, of New York. And the thoughts that were going through my head, of course, were about my daughters, just wanting to see them again and give them a big hug so they wouldn't grow up without parents."

National Transportation Safety Board chairman Robert Sumwalt said one person was killed. It was the first passenger fatality in an accident involving a U.S. airline since 2009, Sumwalt said.

Seven other people were treated for minor injuries, Philadelphia Fire Commissioner Adam Thiel said. He said there was a fuel leak in one of the engines when firefighters arrived and a small fire was quickly brought under control.

The Federal Aviation Administration said the crew reported damage to one of the engines, the fuselage and at least one window. The NTSB sent a team of investigators to Philadelphia. Sumwalt said the engine will be taken apart and examined to understand what caused the failure.

Bourman said she was seated near the back and was asleep when she heard a loud noise and oxygen masks dropped. She said the plane was fairly quiet because everyone was wearing a mask.

"Everybody was crying and upset," she said. "You had a few passengers that were very strong, and they kept yelling to people, you know, 'It's OK! We're going to do this!'"

Passenger Marty Martinez went on Facebook Live while wearing an oxygen mask. He posted, "Something is wrong with our plane! It appears we are going down! Emergency landing!! Southwest flight from NYC to Dallas!!" After the plane landed, he posted photos of a broken window near the left engine.

Everyone started yelling to brace for impact as the plane came in for a landing, Bourman said. She said passengers clapped and praised the pilot after the aircraft touched down.

Bourman said she saw emergency workers using a defibrillator to help a woman who was then taken off the plane. Bourman said that she also saw a man in a cowboy hat rush to cover the broken window and that the man had a bandage around his arm after the plane landed.

Passengers did "some pretty amazing things under some pretty difficult circumstances," Thiel said.

Tracking data from FlightAware.com showed Flight 1380 was heading west over Pennsylvania at about 32,200 feet (10 km) and traveling 500 mph (800 kph) when it abruptly turned toward Philadelphia.

The last time a passenger died in an accident on a U.S. airliner was 2009, when 49 people on board and one on the ground were killed in the crash of a Continental Express plane near Buffalo, New York.

Southwest has about 700 planes, all of them 737s, including more than 500 737-700s like the one in Tuesday's accident. It is the world's largest operator of the 737. The 737 is the best-selling jetliner in the world and has a good safety record.

The jet's CFM56-7B engines were made by CFM International, jointly owned by General Electric and Safran Aircraft Engines of France.

CFM said it sent technical experts to help NTSB investigators. In a statement, it said the CFM56-7B has had "an outstanding safety and reliability record" since its debut in 1997, powering more than 6,700 aricraft worldwide.

John Goglia, a former NTSB member, said investigators will take the engine apart and look at its maintenance records as well.

"There's a ring around the engine that's meant to contain the engine pieces when this happens," Goglia said. "In this case it didn't. That's going to be a big focal point for the NTSB — why didn't (the ring) do its job?"

Goglia said the Boeing 737 is a safe plane but engine failures happen from time to time.

"We're pushing the engines to produce as much power as possible," he said. "We're right on the edge. Sometimes they fail, and that's why the containment ring is there."

The engine failure was reminiscent of a similar event on a Southwest Boeing 737-700 jet in August 2016 as it flew from New Orleans to Orlando, Florida. Shrapnel from the engine left a 5-by-16-inch hole just above the wing, and the oxygen masks dropped. The plane landed safely in Pensacola, Florida.

NTSB investigators said one of the engine's fan blades broke off during the flight, apparently because of metal fatigue.

Before Tuesday, Southwest had never had an accident-related fatality of a passenger, although a boy died in 2006 when a Southwest jet skidded off a runway at Chicago's Midway Airport, crashed through a fence and collided with the boy's family's car.

Watch: The Latest: Crash of military plane in Algeria kills 181