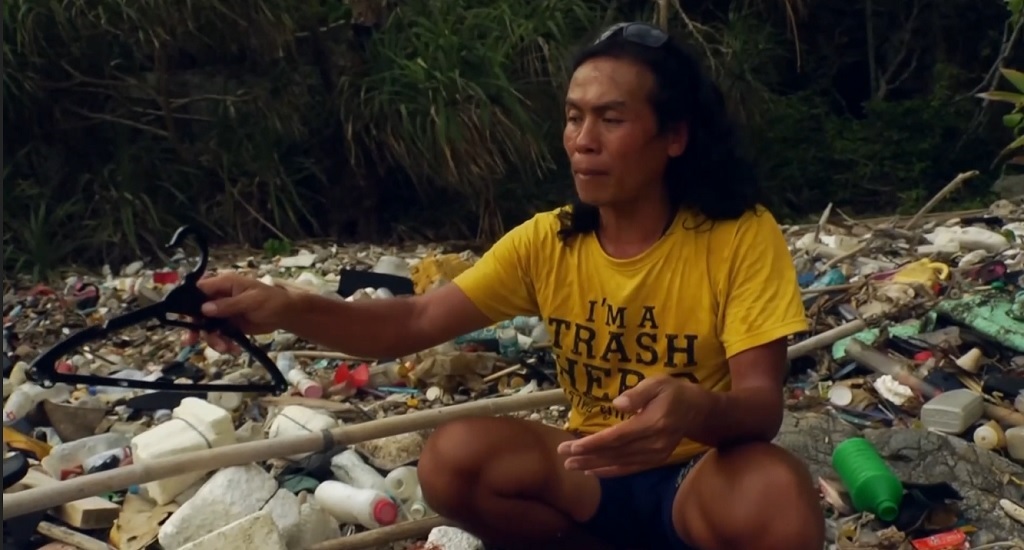 A 2017 report by Ocean Conservancy says that just five countries - China, Indonesia, Philippines, Thailand and Vietnam - dump more plastic into the ocean than the rest of the world combined.

The report says plastic pollution is killing marine life and that toxic fragments from plastic can end up in the food-chain causing ill health.

The largest organisation working to solve the plastic pollution problem in Thailand is the Switzerland based non-profit Trash Hero.

The group organises weekly garbage pick-ups throughout Thailand and the region aimed at cleaning up the environment and raising awareness of the plastic problem.  Once collected the litter is passed to the local state collection service and eventually ends up in a landfill.

"There's many problems as far as the garbage is concerned. A certain percentage of it comes from people buying something from the store. They get it wrapped in three carrier bags. They get a spoon and a straw thrown in."

"When they're finished with it it doesn't always end up in the bin. I think another percentage of it comes in with the tides and the tide can bring a lot of plastic pollution for example, that is washed… originally washed down the river, or downstream into the sea, and then it kind of finds its way washed up onto the beaches in Thailand and it might not have actually have originated from Thailand," he says.

But every high-tide deposits a fresh line of plastic garbage washed up on many beaches.

Isolated beaches like this one that are not cleaned regularly are the worst affected.

Today there is a 3 feet thick layer of plastic waste piled up on the beach with more being added every day.

"It comes from Vietnam, China, Cambodia and yes from Thailand too. And it comes in many different forms. There's hospital and medical waste, household items, lighters, children's shoes. This is from fisherman. Clothes hangers like this one are from the city on the mainland for sure. They throw them in the wrong place and they are washed down the rivers, ending up in the ocean," says Koch.

Plastic can take hundreds if not thousands of years to biodegrade which means that it is constantly building up, both on land and in the sea.

According to the Earth Day Network, 8.3 billion tonnes of plastic have been produced since it was first introduced in the 1950s, less than 10 percent of which has been recycled.

It says that nearly one million plastic bottles and 2 million plastic bags are used globally every minute and that around 8 million tonnes of plastic ends up in the world's oceans each year.

And as stated by Thailand's Pollution Control Department, plastic waste in the country continues to increase at a rate of around 12 per cent per year, or around 2 million tonnes.

It's now widely recognised that tackling the root of the plastic problem requires a change in the way people consume it.

Most Thais have generally not been educated about the plastic pollution issue but some businesses are trying to set an example. The Blue Lagoon resort has been leading the way on Koh Chang for years and is one of the first businesses on the island to adopt eco-friendly practices.

"At the Blue Lagoon resort we have found ways to reduce the use of things like plastic bags and foam food containers," says manager Angie Apple.

"For example the sellers that we use to buy our vegetables, spices, meats and so on, they have to deliver without using any of those things. In the future I would like to see the people using cloth bags instead of plastic bags so plastic will gradually disappear."

Recycling combined with reduced production and consumption are seen as the keys to solving the plastic problem over the long term.

To that end the Thai government has announced a new strategy aimed at reducing plastic pollution by 60% by 2021.

The UN's World Environment Day is June 5 2018. This year's theme is 'beat plastic pollution - if you can't reuse it, refuse it'.

Whale dies in Thailand after swallowing 8kg of plastic