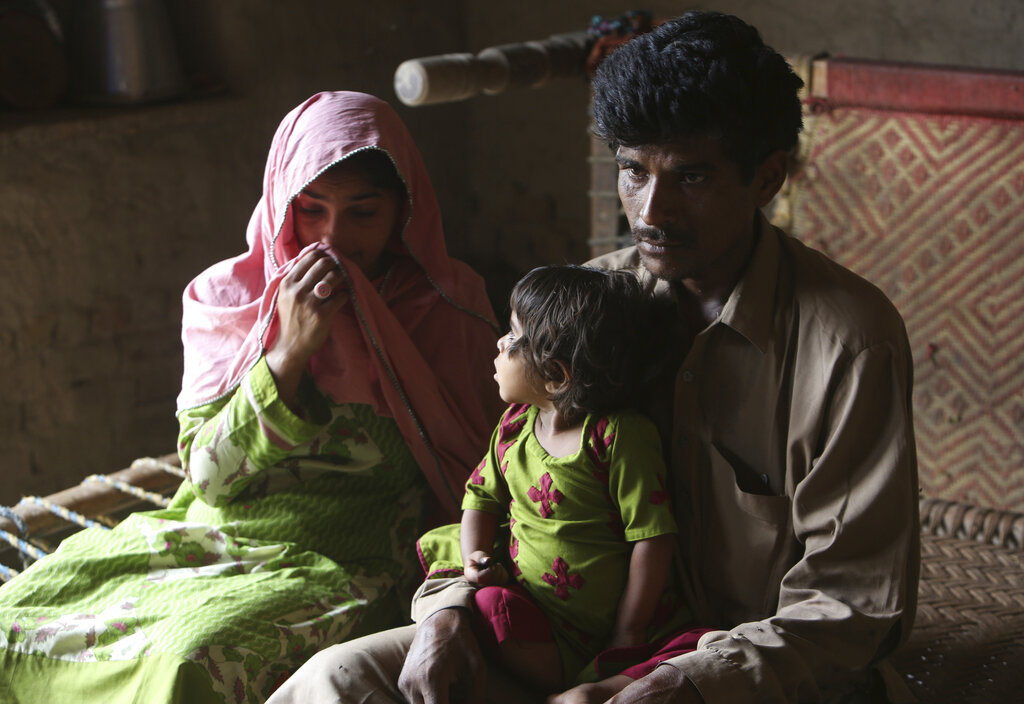 Tariq Ali, 30 along with his wife Perveen and three-year-old Ume Kulssom all infected with HIV. Officials say about 500 people, mostly children, have tested positive for HIV. A local doctor who has AIDS, has since been arrested and is being investigated for possibly intentionally infecting patients.

Perveen Seelro's life has turned upside down. Seelro, her three-year-old daughter and her husband have been diagnosed with HIV/AIDS.

Her husband Tariq Ali Seelro was diagnosed with the same disease in June last year.

Their predicament leaves her dejected and speechless most of the time. She can't stop the tears as she explains her plight.

Perveen Seelro and her family live in a crumbling, dusty village in Sindh province of Pakistan. Her home houses two other HIV positive children, her husband's nephew and niece.

Seelro's father-in-law is the family's only source of income. No-one in the nearby town of Ratodero will employ her husband.

Tariq Ali Seelro says: "I got my blood screened from Larkana where it was revealed that I am HIV/AIDS positive. My treatment started then. Before that, I had become very weak and I couldn't even stand on my feet. My wife and I get treatment regularly along with other children in the house."

Alarm has spread among the residents, health workers and the government as the numbers of HIV positive cases increase with every passing day.

At the entrance to Taluka Hospital women clinging to their children jockey for position, desperate to get their youngsters screened for the virus.

Dr Sunil Kumar Dodani, Assistant Professor of Infectious Diseases at the Sindh Institute of Urology & Transplantation explains: "The outbreak investigation will be done by Sindh Aids Control Program along with probably Aga Khan University and the results will come but as per the experts' opinion, the reason seems to be contaminated syringes. Because when these kids get sick in general population they go to doctors and they advise some IV medications so probably that repeated exposure to syringes led to this huge outbreak in this Ratodero city."

According to Sindh's Aids Control Program children are bearing the brunt of this outbreak, 463 of the total HIV/AIDS positive cases are children under 5 years, compared with 109 adults.

The population of Ratodero and its surrounding area is around 330,000.

Currently, more than 17,000 people including children have been voluntarily screened.

Health officials have pledged the screening will continue as long as people continue to come here.

This HIV outbreak is being blamed on a local doctor who is alleged to have reused contaminated syringes, but a full investigation is still underway.

Authorities claim the HIV outbreak in Larkana started when a local paediatrician, who is HIV positive, infected patients.