WATCH: Police brutality caught on CCTV in the UK 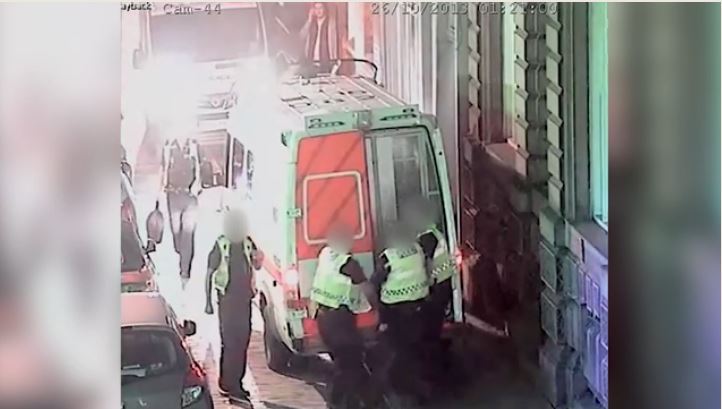 This is a shocking video of a group of police officers in the United Kingdom kicking and punching a defenceless man on the ground unaware that they’ve been caught on CCTV.

David Prosser, 27, was punched and kicked by officers serving at Humberside police after handcuffing him for being drunk and disorderly.

The CCTV footage shows David falling to the floor and then repeatedly being kicked and punched by officers.


David had extensive bleeding to his head causing a concussion, his arm was in a cast for six weeks, he had cuts and scarring to his face, a bloodshot eye and blurred vision.

David now suffers from post-concussion syndrome – a mild form of traumatic brain injury – persistent headaches and long-term psychological injuries, which he claims was caused by the police officers.

Both were allowed to remain in their jobs however, and were given final written warnings.

The force denies the officers’ actions had caused long-term injuries, however they still offered a substantial increase in damages, and a five-figure settlement.

David said: "I had no idea why I was arrested but everything happened so fast and after being handcuffed I was pinned to the back of the police van.

"I then fell to the ground and was kicked and punched a number of times by the police officers.

"They attacked me, they aren't fit to wear the police uniform.

"I'd been on a night out with friends when I was targeted by police, I'm just so grateful to the CCTV footage as without it, no one would have believed me.

"I was taken to hospital after being arrested as my injuries were so severe, I don't trust police officers anymore, they are supposed to protect us not punch and kick us for no reason."

David had been in Hull city centre drinking with work colleagues on Saturday, October 26, 2013 when arrested. He says such has been the impact of what happened that night, he now rarely ventures into the city on a night.

He added: "Much of that night is a blur to me now. I have a vague recollection of struggling and then hitting my head. The next thing I remember was being in hospital. The rest is just flashes on the night.

"It has had a big impact on me. I used to like a night out but now I rarely go into town, and if I do it is only with a few friends or family. I feel anxious when I am out and can’t really relax and enjoy myself.

"I still get headaches nearly every day also, my vision often goes blurred and I see these black dots. I’ve been told my post-concussion syndrome will last for some considerable time.

"Yes, I was drunk, and of course I didn’t want to be arrested, but the police are meant to be there to handle situations like that calmly and help people who’ve had a bit too much drink to go home safely. They shouldn’t be causing them to need hospital treatment because they’ve cuffed them, thrown them to the ground and punched and kicked them."

David was initially charged with assaulting one of the two officers in the execution of his duty, as well as a public order offence, but when he made an official complaint, an investigation into the officers’ conduct was launched and CCTV footage was reviewed.

Both charges against David were subsequently dismissed at Hull Magistrates Court as no evidence was offered to support them, but he admitted resisting arrest.

He said: "These police officers are meant to be honest and are meant to serve and protect people, yet they attacked me and punched and kicked me on the ground.

"Then, when they were back at the station, the first thing the sergeant was doing was looking to cover his back.

"He denied doing any wrong until the video footage was shown to them, and was only apologetic when he saw the CCTV and started thinking about saving his job.

"I was also the one initially charged with an offence, and had the CCTV not caught what happened, I wouldn’t have been able to prove what happened to me. I’d have been found guilty of assaulting them.

"I am so glad they got caught on the CCTV. The first time I saw the footage was when the officers were having their disciplinary hearings and it was hard for me to watch myself being manhandled like that. I don’t think they are fit to wear the uniform and I didn’t think they should have kept their jobs."

Andrew Petherbridge, from Hudgell Solicitors, said: "It has taken a long time to bring this case to a successful conclusion for Mr Prosser, and for Humberside Police to offer settlement which reflects the impact of the actions of the officers on that night.

"The indisputable facts in this matter are that unreasonable force was used. It was completely unacceptable for officers to be punching and kicking Mr Prosser, particularly when he was on the ground and already handcuffed.

"It is also shocking, and does nothing for public trust in our police officers, to have learned of the sergeant talking about comparing notes.

"This sort of behaviour should not be tolerated in any police force, and members of the public should not be subjected to this kind of treatment."

Humberside Police Supt Matt Baldwin said: "The behaviour of these officers fell below the expected standard here at Humberside Police and therefore their actions were rightfully examined through a misconduct hearing."