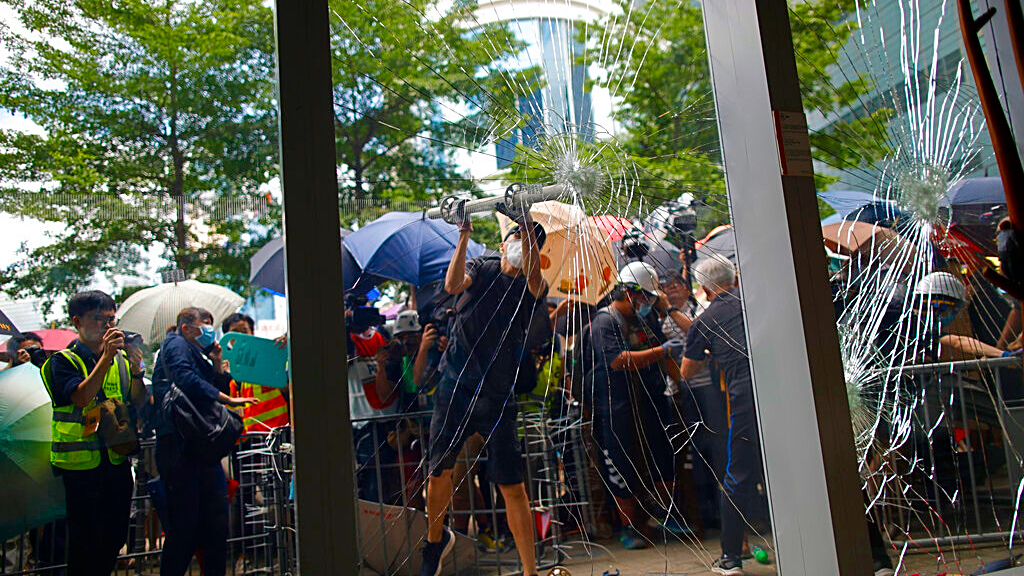 A protester tries to break the glass to get into the Legislative Council in Hong Kong Monday, July 1, 2019. Combative protesters are staging a protest outside the Hong Kong legislature as a crowd of thousands prepares to start a march in that direction. (Jeff Cheng/HK01 via AP)

The Latest on protests on the anniversary of Hong Kong's return to China (all times local):

A group of protesters in Hong Kong has torn down part of glass and metal exterior wall of the legislature building.

Hong Kong Cable TV showed live video Monday of them pulling off long strips of metal framework from the wall and carrying them away.

Earlier, the mostly young protesters hacked away repeatedly at the floor-to-ceiling glass windows, shattering them until they collapsed.

The protesters say the Hong Kong government is not responding to their demands for a full withdrawal of contentious extradition legislation and the resignation of city leader Carrie Lam.

Lam said earlier Monday that she would do a better job of listening to the voices of young people, but she has resisted calls to step down.

U.S. National Security Adviser John Bolton says Washington expects China to adhere to its international obligations when it comes to handling matters related to the semi-autonomous region of Hong Kong.

Bolton's comments during a brief visit to Mongolia on Monday came as thousands of Hong Kong residents filled city streets in an annual show of defiance against the Beijing-backed government. Marchers were energized by an ongoing controversy over now-suspended legislation that would allow suspects to be sent to mainland Chinese courts.

The U.S. expects "China like every other country to adhere to its international obligations," Bolton said.

In Beijing, Chinese foreign ministry spokesman Geng Shuang told reporters at a daily briefing that "Hong Kong affairs are purely China's internal affairs, and no foreign country has the right to intervene."

Protesters are making a second attempt to smash through windows at Hong Kong's legislative building.

A clanging sound could be heard late Monday afternoon as they banged repeatedly on the windows.

Earlier in the day, protesters smashed the bottom of a floor-to-ceiling window before police repelled them with pepper spray.

Television footage showed police waiting with gas masks on, but it was unclear if they would deploy the gas.

The protesters say the government isn't responding to their demands for a formal withdrawal of an extradition bill that has been suspended and the resignation of Hong Kong leader Carrie Lam.

Chris Patten, who served as Hong Kong's final governor while it was a British colony, says the UK must take a "much firmer line" against China amid fears it is increasing its influence in Hong Kong.

Patten, speaking Monday on the 22nd anniversary of the return of Hong Kong to China, warned that Chinese leaders have been "strengthening their grip" on the semi-autonomous territory.

He said the British government has not been tough enough over China's treatment of the Sino-British joint declaration of 1984 for Hong Kong's autonomy.

Organizers of a protest march in central Hong Kong have changed the ending point because of an ongoing protest by a smaller group trying to smash its way into the city's legislative building.

The Civil Human Rights Front said Monday that the march would go to an area nearby instead of to the legislature. Police asked the organizers to stop the march at an earlier point, but the organizers refused.

The announcement came shortly before thousands of people set out from Victoria Park on a march down main roads. They are demanding that a proposed extradition law be withdrawn and that Hong Kong's leader step down.

The annual march is held on the anniversary of Great Britain's return of Hong Kong to China in 1997.

Police are warning combative protesters to stop trying to break into the Hong Kong legislative building.

With a crowd of a hundred or more people around them, a group of eight to 10 people repeatedly rammed a shopping cart and poles into a glass panel. After they managed to get the cart wedged into the damaged panel, police grabbed the cart away from them. They also posted a sign saying to the protesters, stop charging before we use force.

The combative group tried to shield themselves with umbrellas, a tactic used in the past to ward off pepper spray.

The unexpected disruption stalled the start of an annual march Monday marking the anniversary of the former British colony's return to China in 1997.

Combative protesters are staging a protest outside the Hong Kong legislature as a crowd of thousands prepares to start a march in that direction.

The unexpected disruption stalled the start of the march Monday. The crowd has started filing out of Victoria Park around 2 p.m.

Police asked the marchers to change their route or cancel the march.

Both the combative protesters and the marchers are opposing a government attempt to change extradition laws to allow suspects to be sent to China to face trial. The proposal has increased fears of eroding freedoms in the territory that was returned to China in 1997.

Protesters in Hong Kong are taking a break after a morning confrontation with police and ahead of a planned march in the afternoon.

Several hundred demonstrators sat or napped Monday in the shade of a covered outdoor plaza that has becoming their gathering point.

Police drove them back earlier in the day as they tried to force their way toward the venue for a ceremony to mark the 22nd anniversary of the return of Hong Kong to China in 1997.

Many more people are expected to join the march against a proposal to allow suspects to be extradited to China to face charges.

A protester who gave only his first name, Jack, said "the rule of law is the last firewall between us and the Chinese Communist Party."

Hong Kong's leader says a series of protests that have rocked her city have taught her that she needs to listen better to the youth and people in general.

Chief Executive Carrie Lam struck a conciliatory note Monday at a ceremony marking the 22nd anniversary of the return of the former British colony to China.

She said she has to remind herself all the time of the need to grasp public sentiments and ensure the government's work is closer to the aspirations of the people.

Security guards pushed a pro-democracy lawmaker out of the room as she shouted at Lam to resign.

Lam has come under criticism for pushing legislation that many saw as eroding Hong Kong's freedoms as a semi-autonomous territory of China.

The Hong Kong government has marked the 22nd anniversary of the former British colony's return to China, as police faced off with protesters outside the venue.

A flag-raising ceremony was held under high security Monday morning with police using riot shields to push back demonstrators who had blocked a nearby street.

Hong Kong leaders and guests watched the ceremony inside the city's convention center instead of outside as they normally do. The government cited inclement weather after light rain earlier in the morning.

A march planned for Monday afternoon is expected to be larger than usual because of widespread opposition to recent government actions that have awakened broader fears that China is eroding Hong Kong's freedoms.