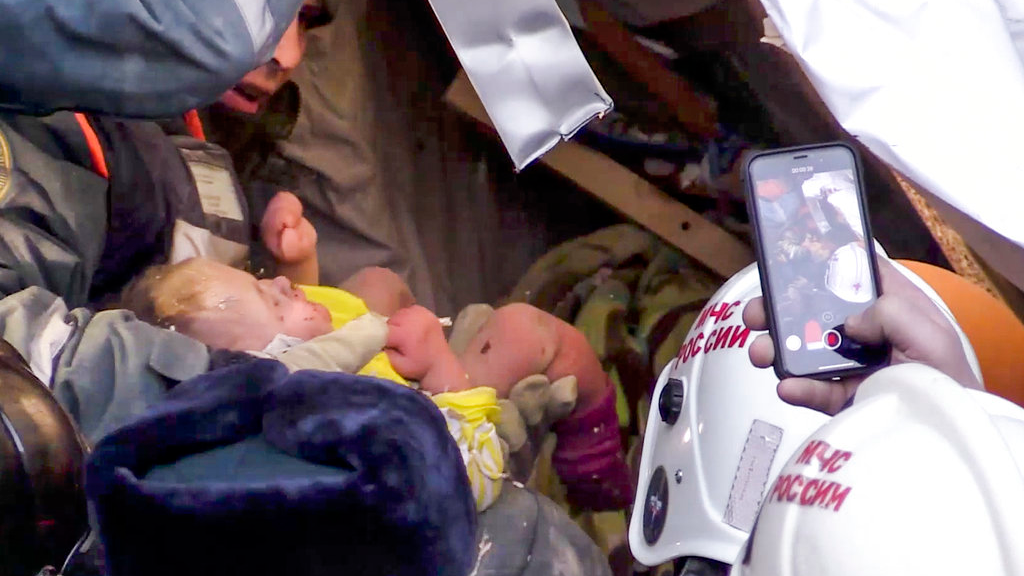 This photo provided by the Russian Emergency Situations Ministry taken from TV footage shows Emergency Situations employees save a 10-month-old baby at the scene of a collapsed section of an apartment building, in Magnitigorsk, a city of 400,000 about 1,400 kilometres (870 miles) southeast of Moscow, Russia, Tuesday, Jan. 1, 2019.

Labouring through sub-freezing temperatures, Russian rescue workers were digging into a sprawling heap of jagged rubble from a collapsed apartment building when one heard the faintest sound.

It was the sound of life.

On Tuesday, to everyone's delight and surprise, they pulled a baby boy out of the rubble alive, nearly 36 hours after the disaster that blew apart his home. His father called it "a New Year's miracle."

The building collapse in the Russian city of Magnitogorsk before dawn Monday has killed at least nine people so far, and officials say 32 people who lived in the building have still not been accounted for.

The collapse followed an explosion that was believed to have been caused by a gas leak.

The boy, an 11-month-old named Ivan Fokin, was in extremely serious condition, officials said, with fractures, a head injury and suffering from hypothermia and frostbite after his ordeal in temperatures around minus 20 degrees Celsius (minus 4 degrees Fahrenheit).

He was flown to Moscow late Tuesday in a desperate attempt to save his life. He was in stable condition on arrival in the capital, the head of the national public health institute Vladimir Uiba was quoted as telling state news agency Tass.

Although Ivan's prospects for survival appeared dire, "it's a New Year's miracle," his father Yevgeny was quoted as saying by the RT satellite TV channel.

The father was at work when his wife phoned to say the building had collapsed. She escaped the rubble with a 3-year-old son, Russian news reports said.

"I was sleeping on the couch with my older son, hugging him and the young one was sleeping in his baby bed," mother Olga Fokina said on Russian TV. "I and the older one fell down and quickly got out and I didn't know what happened to the baby bed afterward."

Rescue worker Pyotr Gritsenko said on Russian television that baby's discovery came after one of the crew heard faint cries.

"They stopped all the equipment. He began to cry louder," but the crew couldn't find him, he said. A search dog was brought in and confirmed that someone was under the rubble, focusing the rescue effort.

The father said he helped rescuers dig in the rubble and "showed them a place where he approximately could be."

Regional governor Boris Dubrovsky was quoted as saying by the Interfax news agency that the child apparently had been protected by being in a crib and being wrapped warmly.

The rescue operation, aided by powerful heaters and lights, was continuing overnight into Wednesday in the city about 1,400 kilometers (870 miles) southeast of Moscow.

Russian President Vladimir Putin visited the accident site on Monday and went to a local hospital, where he spoke to a 13-year old-boy who had head injuries and frostbite after spending an hour under the rubble.

"You will get well soon, you are a fighter," Putin told the boy, one of five people hospitalised from the building collapse.

Russian officials say the odds of finding anyone else alive in the debris look increasingly slim, given the extreme weather.

Late Tuesday, three people died in Magnitogorsk about two kilometres (1.2 miles) down the same street as the collapsed building when their passenger van exploded and caught fire. Police said the vehicle was carrying gas canisters.

In other Russian holiday disasters, seven people including a couple and their three children died in a house fire in the town of Orsk, 1,500 kilometres (900 miles) southeast of Moscow, Interfax reported. The fire early Tuesday is believed to have been caused by an electrical short-circuit, the report said.

In Moscow, the mayor fired the director of the city's renowned Gorky Park after 13 people were injured when a wooden pedestrian bridge packed with New Year's celebrants collapsed.

Video on Russian television showed a section of the bridge collapsing early Tuesday as the national anthem played on loudspeakers, marking the beginning of 2019. The park in central Moscow is a popular gathering place for the holiday.

Watch: Boy, 12, survives avalanche that buried him for 40 minutes

9 bodies found in burning potash mine in Russia